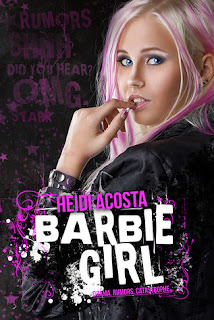 The only thing that 17 year old Barbie Starr wants to do is graduate high school so she and her little brother, Everett, can get out of Alabama. She doesn’t care about the rumors that are spread around about her like wild fire. Rumors are nothing new to her. Sure, maybe she could change her reputation, but why bother. She is leaving Alabama as soon as she can. That is, if she can pass algebra and graduate.

The only thing Dylan Knight would like to do is go through high school unnoticed; he has had enough of the drama that is high school. He took the whole of last summer to bulk-up: finally he is not being called names or being shoved into lockers. He wants to remain on the outside of the circle of constant rumors that surround the so-called popular kids who get all the attention. He would not, however, mind if his long time crush Katie took notice of him.

But it is Barbie who notices Dylan and she offers him a deal he can’t pass up: if he helps her pass algebra, she’ll help him get the girl of his dreams. Dylan agrees, but, as it turns out, nothing is simple when it comes to Barbie. Somehow, she can’t help but draw attention to herself — and to him. Soon Dylan finds himself tossed into the whirlwind of rumors that seem to follow Barbie everywhere. Can he save his reputation and still get the girl of his dreams? Or will Barbie be the one to break through his carefully-built facade?

Not everything is Black and White, sometimes there is some gray in the middle. But that’s not how everyone sees Barbie. Barbie doesn’t care about  the rumors that spread around about her. She just wants to graduate so she can finally leave Alabama. She can’t do that without getting her grades up and hiring a tutor. So she asks Dylan to help her. Little does she know that he can get under her skin like no one else. Will Barbie get her happily ever after or will everything go up in flames?

What can I say about this book? It was emotional, it was inspirational, it was magnificent, but most of all it was gut-wrenching. Most of the time I had to keep my tears in check. This book has to come the closest to what really happens in high school. Girl and rumors can be cruel and if you act different or dress different you’re a freak. Barbie doesn’t care what anyone thinks of her and does what she wants. She knows people will are going to come to their own conclusions so she doesn’t bother to correct them. This book wasn’t just about falling in love, it was about a girl that wants to graduate and make a better life for herself and her brother. This is a book about what you see on the outside is not what you always see on the inside.

Barbie: She is misunderstood. She dresses the way everyone thinks she should dress. She also dresses like this b/c she doesn’t want people to know the real her. She is so strong and admirable. Sure some of her choices aren’t the best but it’s all part of the act. I can’t wait to see what she does next.

Dylan. He was one of the people who only looked at what was on the outside. He is so stuck on his crush Katie that he can’t see what’s right in front of him. There were times when he got on my nerves and others I wanted to kiss him. Hopefully he will be more grown-up in the next book.

Third: This book wouldn’t have been the same without him. At first he just wanted to be with Barbie and nothing else. But as the story goes on her starts to get to know the real Barbie. He gets a clear understanding of who she is. He becomes her closet friend in the the book. He was a sweet guy who deserves a girl that will treat him right. I wish him the best.

The cover: It is just awesomesauce. The girl on the cover looks just like I Picture Barbie to be. You couldn’t have picked a better cover model. I also love all the words that are in the background. It makes it more real.