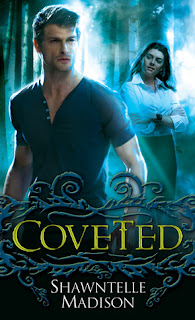 SOMETIMES WHAT YOU COVET IS IMPOSSIBLE TO KEEP.

For werewolf Natalya Stravinsky, the supernatural is nothing extraordinary. What does seem strange is that she’s stuck in her hometown of South Toms River, New Jersey, the outcast of her pack, selling antiques to finicky magical creatures. Restless and recovering from her split with gorgeous ex-boyfriend, Thorn, Nat finds comfort in an unusual place: her obsessively collected stash of holiday trinkets. But complications pile up faster than her ornaments when Thorn returns home—and the two discover that the spark between them remains intense.

Before Nat can sort out their relationship, she must face a more immediate and dangerous problem. Her pack is under attack from the savage Long Island werewolves—and Nat is their first target in a turf war. Toss in a handsome wizard vying for her affection, a therapy group for the anxious and enchanted, and the South Toms River pack leader ready to throw her to the wolves, and it’s enough to give anybody a panic attack. With the stakes as high as the full moon, Nat must summon all of her strength to save her pack and, ultimately, herself.

I received this from Random House Publishing for my honest review.

Nat is a hoarder or as she would like to call herself a "Collector".  She's had a problem with it for years and she finally started to get better when she met Thorn. When he left so did her will and she slowly started to fall apart. And b/c of her OCD tendencies she is a weak link in the pack. She decides to just leave the pack and be on her own.

A year later she still isn’t any better and her whole house is full of Christmas ordainment's. She gets word that Thorn is back in town and she is thrilled but sad. Things go from bad to worse when members of her pack begin to turn up dead. And for reasons she doesn’t know, they want her dead as well.

Will Thorn be the one to save her or will it be her sexy wizard hoarder?

Nat is all by herself and her time is running out. It's kill or be killed.

I’m going to start this review a little differently than I do other reviews. I’m going to start with what I didn’t like or what annoyed me. Ok, so in the beginning I could tell that Nat and Thorn were in love….or so I thought until HE LEFT HER!!!!! If he really loved her he wouldn’t have left her. Obviously, she wasn’t worth staying for. And it really irks my nerves when he finally comes back she still wants him. Come on!!!!! He left you and you still want him. Not in my world. Another thing that I didn’t like was how she didn’t stand up for herself. I wanted her to be strong like a wolf should be, not be submissive. I guess it goes with her personality. Now that I said that let’s get to the things that I did enjoy about this book.

I pretty much loved this book. Nothing really blew me out of the water, but I loved it. What made it interesting was Nat’s hoarder tendencies. How she would talk about her Christmas Ordainment's and want to get more. Oh, and she liked everything to be clean as well. It made her seem more real. I applauded her when she finally went back to therapy. After all that things start to heat up. Wolves start turning up dead and everyone thinks nothing of it until it happens again. No one is safe. And who is doing the killings? Nat probably wouldn’t have gotten through all of this if she didn’t have her friend there with her. I mean her whole pack thinks she is not worth protecting. So it’s just her and her friend. When she finally meets the wizard, well that was some fun. He knows how to have a good time and no I’m not talking about party’s .LOL We finally get to see a different part of Nat, a stronger side. She can be herself around him b/c he does the same things she does…without the magic. I really really hope in the next one she gets her mind off Thorn b/c if is sooo not worth the effort she puts in.

This book goes to show that even the weakest in the pack can do some damage.

Nat- She really confused me. Here I thought she was going to be a strong character and when Thorn comes back to town, he is all she can think about. Which makes me HIGHLY ANGRY because HE LEFT HER!!!!!!!!!! I know she has problems with hoarding and cleanliness, but does she need to add swooning after jerks too? I really hope in the next one she gets over him.

Thorn- Ok so you can tell that I think he is a jerk and he is. He comes back to town like nothing is wrong, like he just didn’t leave Nat all those years ago without telling her. He makes me SICK. I’m sorry he does. Some of you might like him, but I don’t. He is to full of himself. He knows what he does to Nat and yet he still messing with her. What kind of guy does that?

Abby- I loved her!! She was sooo funny and was eating all the time. I hope to see more of her in the next book. Maybe she will knock some sense into Nat.

Nick- EEP I love him!!!! Hahahahaha Yeah I know I say that about at least one guy in a book, but come on he is a wizard……who has a hoarding problem as well. :D It makes him more real and not fake. (COUGH THORN COUGH) He is totally bada** except the one part where Nat has to carry him LOL but he redeems himself later in the book.

Cover: I really don’t know about the cover. I like it, but I don’t like it because I’m pretty sure that is Thorn on the front. And of course Nat is staring him down. YUCK Other than that I love it.