[Review] Lumiere by Jacqueline E. Garlick [I loved this book!] 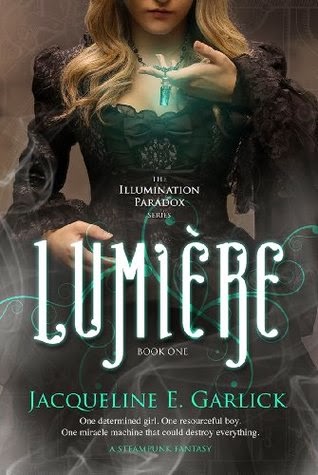 One determined girl. One resourceful boy. One miracle machine that could destroy everything.

After an unexplained flash shatters her world, seventeen-year-old Eyelet Elsworth sets out to find the Illuminator, her father’s prized invention. With it, she hopes to cure herself of her debilitating seizures before Professor Smrt—her father’s arch nemesis—discovers her secret and locks her away in an asylum.

Pursued by Smrt, Eyelet locates the Illuminator only to see it whisked away. She follows the thief into the world of the unknown, compelled not only by her quest but by the allure of the stranger—Urlick Babbit—who harbors secrets of his own.

Together, they endure deadly Vapours and criminal-infested woods in pursuit of the same prize, only to discover the miracle machine they hoped would solve their problems may in fact be their biggest problem of all.

I absolutely ADORED this book. The characters, the world building, the dialogue- everything was wonderful and well-done. The book itself is gorgeous as well. The cover is just as beautiful as the image above. gaaah, it's just awesome.

I had a little money left-over from a giftcard and I have had my eye on this book for a while, so I decided to take a shot and buy myself a paperback copy from Amazon- and I am so glad I did!

The book is told in alternating points of view. Focusing, of course, on Eyelet for the first couple of chapters until she meets Ulrick. Even with the books being told from both character's viewpoints, the mysteries surrounding Ulrick and his companions are well guarded. I loved the driving story of the novel and the fact that both of the characters are flawed. They can be awfully stubborn, but it in no ways lessened my affection for them. Yes, there is romance and it is kind of adorable and awkward and perfect.

Eyelet and Ulrick are great central characters who fight and clash, but have hearts of gold up under their cool and aloof exteriors. Eyelet is a bit of a trouble- maker and Ulrick is a bit of a loner, but from the moment they met, I was hooked on their banter and eventual chemistry.

The steampunk aspects of this novel were fascinating. The opening scene of the book sets the precedent for other cool and outlandish machines that follow throughout the book!

The ending has me flailing around, demanding to know when book two will be completed. Also, I love the clothes described in this book. I may or may not be a little bit in love with this book. I hope the next cover is as bad ass as this one, because I plan to get the next book in print as well. I am going to stop now, so I don't spoil some key elements of the book. I love that there are other plots and elements set up for the next book (or couple of books) in the series. I cannot wait to get to the bottom of everything. The suspense is killing me. O.O

This book has a little bit of everything. Let me know if this sounds awesome: A sort of beauty and the beast/  jekyl and hyde/ mad scientist action with a dash of romance with apocalyptic/dystopian/paranormal and steampunk elements complete with what may be able to be described slightly as crazed demon thingies and a whole bunch of cool gadgets! Don't lie. You're intrigued.

All in all? If you are looking for a kick ass read with original characters and dialogue that contains steampunk, paranormal, dystopian, apocalyptic and romantic elements, then you absolutely need to get your hands on this book. Now. I'm not kidding. Do it. *glares* Go.

I made a promo image, which I shall add to the Facebook page and such to help spread the word about this AWESOME book. :D 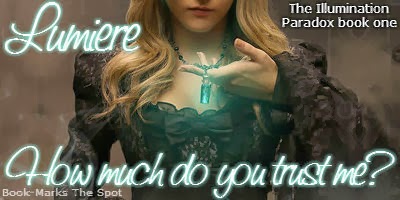 And I had to add some excerpts/ quotes because I CAN. :P

My chin snaps up. What must she think of me?
What do I care what she thinks of me?
I should put her out. That's what I should do. See how she likes it out there with the Vapours. Perhaps then she'd follow my rules!
What are you thinking? I gasp. You can't put her out.
She'd die in a matter of days.
Are you that angry, you want her dead?
Urlick Babbit, you animal, you.

I have no idea why she vexes me so. Especially when I find her so very irritating. I drop the wrench I'm holding into the bin and select another, spinning it off the end of a finger. Eyelet in the kitchen. Eyelet in the study. Eyelet at the table, sitting inappropriately close to me. The shape of her face, the lines of her lips, that tongue of hers- incessantly wagging.

The wrench falls, smarting my toe. Cursing, I bend to pick it up.

"The nerve of her, following me down here like that. She's so stubborn, so pretentious and meddlesome, so...beautiful."

That's it, taunt the man with the gun. That's always brilliant.

She flips up her skirt, exposing her entire thigh, and I nearly faint at the sight.

"What?" She pulls the notched pin from the raven's wing out of the top of her stocking.

"Nothing." I choke on my breath. Hot roses bloom in my cheeks. I shuffle in place, trying to compose myself. I swear if she doesn't stop with these drapery antics, it'll be the end of me.

"They won't survive it, will they?"

"Some don't. Some do," Urlick says, returning to my side. I reach for him, my fists full of his beceps. His wide hands fall warm across my ribs. "How?" I pull back. " How could anyone survive this?"

"No One knows exactly," Ulrick pulls me back. "They're known as the turned. The ones that survive. They emerge from the fog at the end of the storm, like forgotten ghosts on the tails of the Vapours. Forever genetically altered. It is they we fear the most. They, we designed the door locks and the guardian system to keep out. They who are doomed to spend eternity feeding off others' souls."

"How Much do you trust me?

Wow, it occurs to me that I didn't get a lot of good ones from Eyelet's POV. Hmn. Methinks, Ulrick was the more entertaining character, since her quotes didn't capture my attention as much. Apparently.