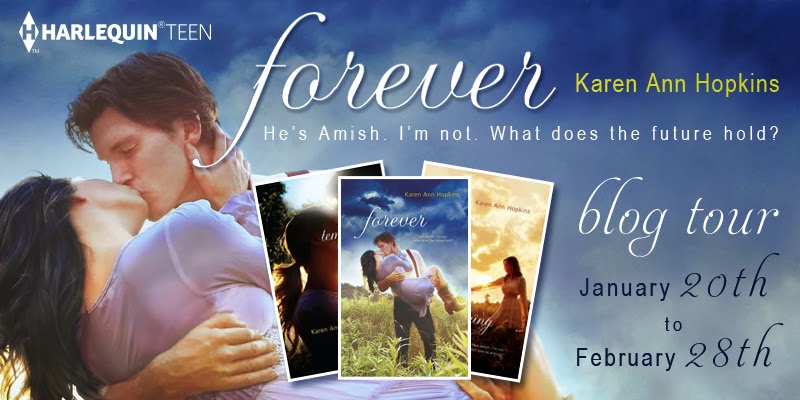 Hello! Today on the blog we have the lovely Karen Ann Hopkins. There is an interview, more information about her Amish themed romance series, and a giveaway! Be sure to check out the other tour stops found at the bottom of the post! (: 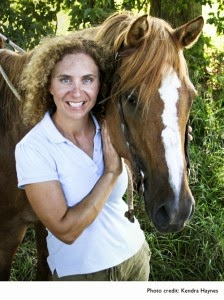 1) Do you have a favorite character from The Forever Series? If so, can you tell me who it is?

I love all the characters in different ways, but Sam was especially fun to write.  No doubt, he’s arrogant and rude, but his voice adds a certain amount of grounded clarity to each situation.  He says what we’re oftentimes thinking, without any sugarcoating.  Even though he gives Rose a hard time, he really loves her and ultimately, that comes through in his actions.

2.) What was the hardest part of writing the series?

Writing Temptation and Belonging were easier than tackling Forever.  I wrote the first two without deadlines and fans voicing their opinions on the direction of the series.  By the time I began working on Forever, there were expectations and two definite groups with opinions on how Rose and Noah’s romance should go.  Some people wanted the lovers to have their happily-ever-after, while others thought Rose was making the biggest mistake of her life by converting to an Amish woman to be with Noah.  Ultimately, I went with my own gut and tried to address the major concerns with a cross-cultural relationship.  In the end, the Temptation series is an epic romance between two people and that’s what I focused on.  Once I accepted the true nature of what I was writing about, the story took on a life of its own.  I’m very pleased with the ending and also with the possibility of future Meadowview books focusing on other much loved characters from the series.

3) What was your favorite part of writing the series?

Writing the Temptation series has been much more than a writing experience for me.  Six years ago I moved from the Smoky Mountains of Tennessee to a northern Kentucky Amish community.  I brought twenty-four horses with me and set up my established horse-back riding business at the new farm.  Within a few weeks a stream of Amish teens were coming to the arena to participate in riding activities with the non-Amish kids.  Watching the interactions between the two groups, and observing some definite flirting going on, I began to wonder how a relationship between the two vastly different cultures could work out.  It seemed impossible and incredibly intriguing at the same time and the seed for Rose and Noah’s story grew in my mind.

I dedicated two years to learning as much as I could about the Amish way of life.  Besides my observations at the arena, my life was inundated with the Amish culture as Amish girls babysat my younger children, Amish teens hung out with my own teen sons, as I drove the Amish women to town to shop and even took a Tennessee vacation with an Amish family.  I attended five Amish weddings and numerous schoolhouse benefits and private dinners with neighbors.  When I’d gained enough experiential knowledge, I began writing and a year later, I had an agent and Harlequin Teen had purchased the forbidden love story.
Not only did I learn so much about a fascinating culture while writing the Temptation series, I also made life-long friends and had experiences that have enriched my life.

4) Do you have any books planned in the near future? If so, can you tell us about your upcoming books?

I’m excited to say that I’ve written an adult Amish mystery that will be available on Kindle this year!  Lamb to the Slaughter is about the intertwining lives of three unlikely people in an Indiana Amish Community and the devastating results when a rebellious teenage girl is found shot to death in a corn field during the harvest.  Serenity Adams is the newly elected young sheriff in the country town of Blood Rock and besides dealing with the threatening behavior of her predecessor, she now has a dead Amish girl on her plate.  At first glance, the case seems obvious.  The poor girl was probably accidently shot during hunting season, but when the elders of the Amish community and even the girl’s parents react with uncaring subdued behavior, Serenity becomes suspicious.  As she delves deeper into the secretive community that she grew up beside, she discovers a gruesome crime from the past that may very well be related to the Amish girl’s shooting.   Serenity enlists the help of the handsome bad-boy building contractor, Daniel Bachman, who left the Amish when he was nineteen and has his own dark reasons to help the spunky sheriff solve the crime that the family and friends who shunned him are trying desperately to cover up.  Serenity’s persistence leads her to a stunning discovery that not only threatens to destroy her blossoming romance with Daniel, but may even take her life in the end.

5) If you were writing a book about your life and past experiences, what would you title it?

My mother encourages me all the time to write about my life as an inspiration for other women who have lived through domestic violence.  I’m very lucky, my writing enabled me to leave an abusive spouse and raise my five children on my own.  But not enough time has passed for me to tackle that kind of subject matter.  I’m still in the healing stages and don’t want to go back to experience those times yet.

6) Can you describe your Forever series in one sentence?

A forbidden romance that you won’t be able to put down.

7)  Do you get extremely attached to your characters? If so, how do you react when you have to write a scene that is going to be particularly hard on them?

Yes, I become attached to the characters, and when their going through difficult times, I’m crying right along with them.

8) Do you have a favorite place where you love to write?

There’s a large window in my bedroom that faces the barnyard and paddocks.  I can glance up and easily see the horses grazing and the ducks enjoying the sunshine while roosting on the wood board fencing.  If the wind picks up, the large oak trees near the house begin rustling and the sound is very calming.  It’s the perfect place to write.

9) Are any of your characters loosely based off someone you know or used to know?

I think it’s inevitable that authors infuse characteristics of people they know or have known into their stories.  I probably do it too, but not in a knowing way.  It’s more of an unconscious type of thing and when the manuscript is completed and I’m revising, it suddenly strikes me that a certain character is very much like someone in my life.

10) I would like to end the interview with something fun. Can you tell me something fun/random/wonky/crazy about yourself or your writing habits?

My head is cleared and my creative juices flow when I’m out hacking through the fields and woods on my favorite horse, Cisco.  A few hours in the saddle each week does the trick for me.  I find that if there’s a long stretch of bad weather or I’m just too busy to get out and ride my horse, I don’t get as much writing done.  The solitude of being out on my horse is where my ideas and inspiration come from.
Thanks for having me on your blog!

I love to hear from my readers!  Please contact me on Facebook with your thoughts on the series or any questions about the Amish you may have.

A native of New York State, Karen Ann Hopkins now lives with her family on a farm in northern Kentucky, where her neighbors in all directions are members of a strict Amish community. Her unique perspective became the inspiration for the story of star-crossed lovers Rose and Noah. When she’s not homeschooling her kids, giving riding lessons or tending to a menagerie of horses, goats, peacocks, chickens, ducks, rabbits, dogs and cats, she is dreaming up her next romantic novel. 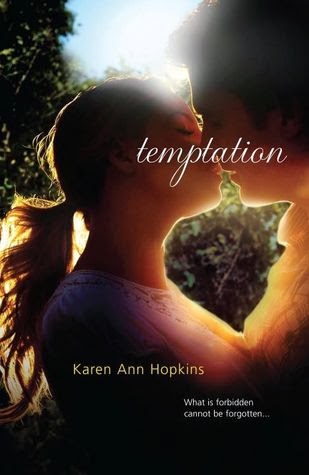 Your heart misleads you.
That's what my friends and family say.

But I love Noah.
And he loves me.

We met and fell in love in the sleepy farming community of Meadowview, while we rode our horses together through the grassy fields and in those moments in each other's arms.

Because he's Amish.
And I'm not. 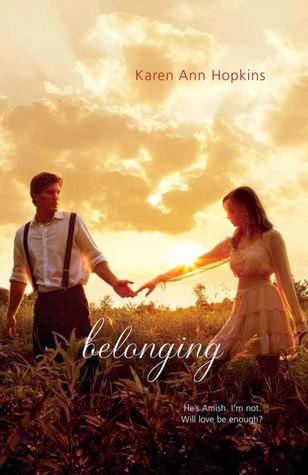 I left everything I knew behind.

No one thought an ordinary girl like me would last two minutes living with the Amish, not even me. There are a lot more rules and a lot less freedom, and I miss my family and the life I once had. Worst of all, Noah and I aren't even allowed to see each other. Not until I've proven myself.

If I can find a way to make it work, we'll be NOAH & ROSE

But not everybody believes this is where I belong. 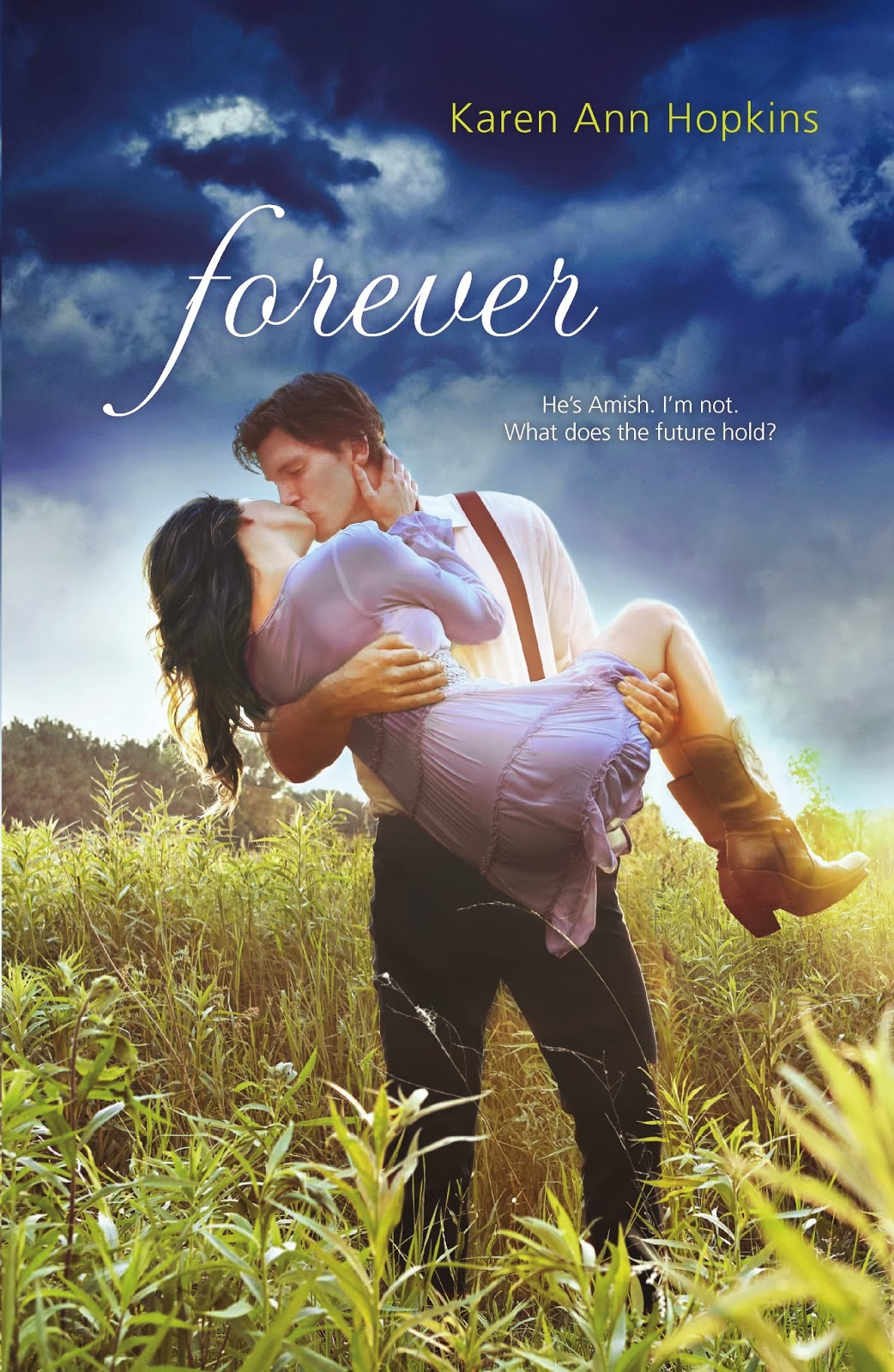 All I want is my happily-ever-after.

From the day we met, the world has tried to keep Noah and me from being together, but now that I'm carrying his child, no one will be able to tear us apart. Or so I hope. But Noah and I have made some mistakes along the way, and the consequences are impacting the people we love. Worse, there's a storm on the horizon, and it's sure to cause serious devastation.

If we can get through this, we'll finally be Rose and Noah; a family, forever.

But first we have to survive the road ahead. And happily-ever-after is a long way off 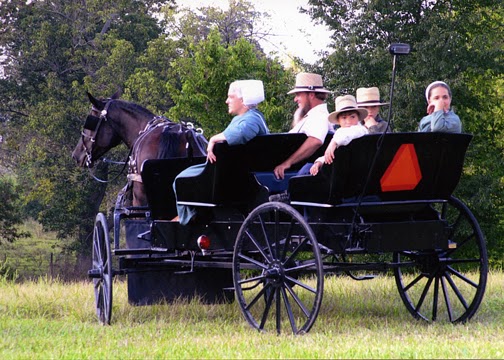 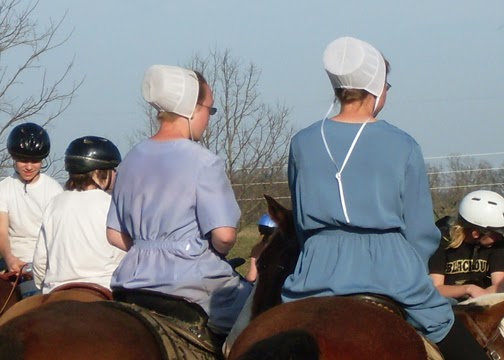 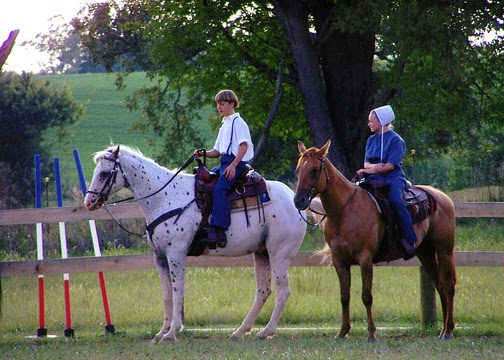 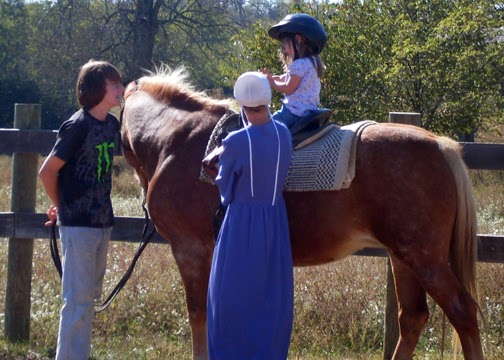 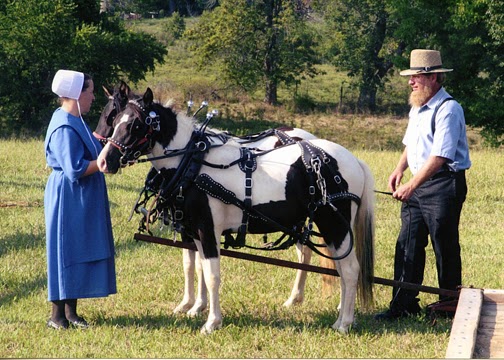 We have lots of exciting prizes, so make sure to follow the tour for more chances to win every day! Up for grabs is both a $100 Amazon Gift Card and a $50 Amazon Gift Card, plus copies of the following Harlequin TEEN titles: Heartbeat, The Queen’s Choice, White Hot Kiss, Anything to Have You, Secret Diamond Sister and Grim. Please enter via the Rafflecopter form. Giveaway is open to US/Canada.