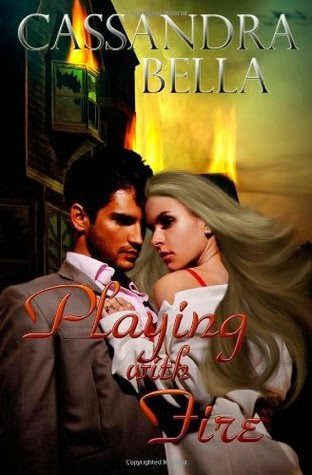 
At the tender age of eighteen, Jessie Bacelli learned the truth of evil. After the murder of her father, Jessie steps in to take care of her younger sister, Annie, while following in her father’s footsteps and becoming an agent for the Federal Bureau of Investigation. Dedicating her career to bringing down Luther Rabago, the man responsible for her father’s death, she doesn’t have time for distractions in her life. Especially when they are as handsomely annoying as fellow agent, Alec Chambers.

But then Jessie is faced with the worst horror of her life. Luther Rabago has taken her sister, Annie, and initiates a dark game of cat and mouse that stretches from the streets of Downtown Denver to the heart of the French Quarter in New Orleans. Partnered with Alec, Jessie finds herself battling not only her fear for her little sister, but her attraction to a man that is everything she swore long ago she would never allow in her life. And as the flames ignite around them, Jessie realizes she very well might lose more than she ever imagined.

Review
This book is a mixture of Suspense and contemporary with strong elements of romance. The book is told in third person points of view, alternating the focus  on several different characters. The novel focused predominately on Jessie and Alec with small sections focusing on Annie, Rabago (villain), Brett (father's partner), and even the father in the first chapter. I thought this book worked nice in 3rd person, since there was still that focus on Alec and Jessie and their emotions. I did not feel as connected to them as if the novel had been told in 1st person, but as a suspense novel, sometimes it is better being able to view the story from the outside while the detectives are chasing leads and introducing more info to the case. It makes the story a bit more fast- paced than if it were in 1st person. That being said, the book was not particularly fast paced, which made sense since detectives do not solve cases and find missing person's in one day as they do on crime shows. That made that aspect a little more believable.

I like that we come into the book with the two main characters having a small working knowledge of each other- even if their prospective opinions are not the most flattering. We delved into Jessie and got to know the inner workings of her heart and what made her tick- after all, this is her story. We sort of get a smaller crash course on Alec whose life was basically pleasant in comparison. He is a woman- lover and he unintentionally aggravates Jessie due to her unwanted attraction to him. She just has a problem with relationships in general and has the lowest opinion of him. He has always just known her as the hot, hard- as steel- FBI agent who spent her career slowly taking down Rabago's empire piece by piece. But then Rabago finally gets tired of her messing with his plans, he decides to make her life hell. He kidnaps her sister, setting off a cat and mouse game where he is always two steps ahead of Jessie. With Jessie forced to partner up with the man who gets under he skin and eager to hunt the man who took her only family, her life starts falling apart around her. Due to the new intimacy of partnership and the race against time to find Annie, the two are forced to spend more time with each other and deal with whatever the hell it is simmering between them. Jessie can't afford the distraction, but at the same time craves it.

While parts of each other's lives are opened up to each other and they learn more about the other, the reader follows along and builds a deeper understanding of the characters and what drives them as the characters figure it out themselves. Although Jessie is a much more defined character who we know every aspect about, Alec was a great character in his own right and I enjoyed watching his feelings for Jessie change throughout the book.

I do feel like I wanted a bit more of the novel focused on Annie, but I guess I can be content with the little I did get.

Rabago was a bit of a sporadic villain and I don't understand why he waited years to retaliate against Jesse when she has been a thorn in his side since she graduated the police academy. I swear to you, at one point the guy was sitting in a chair, plotting her destruction while stroking a cat. I kid you not. I had to laugh at the villain stroking the cat cliche. I don't think it was meant for comic relief, since the book has a serious note, but I don't care. As crazy as he sounded in the book and as master-mind- like as he was throughout the novel, you would think he wouldn't have made the stupid mistakes he made in the end. I can't stand villains who talk and talk giving the victim time to retaliate. If you are going to be evil, damn it, be evil. lol. I know, that is messed up, but come on. Did scar hesitate before he threw Mufasa into the stampede of wildebeest? NO. He did not. That is all.

Aside from the wayward villain (I don't really understand what he did. Was he a drug lord... I.. don't get it. A Don? Some kind of Crime mogul. All I got was that he has henchmen and he is rich and he is the bad guy and that he strokes cats.. moving on. Maybe I just missed that sentence. Dang it, Snyder, pay better attention next time!) and the fact that the book held my attention for short periods of time, but did not keep me glued to it or engrossed in the story too much like some romantic suspense I have read, it was a pretty good read with a well- defined lead character.

While the book was good, It is not one that will stick in my mind. I would recommend to suspense readers though.

Oh! Also, I must mention the title and cover are gorgeous and adequately fit the story-line and characters. (: