{Review} A Rose in the Storm by Brenda Joyce 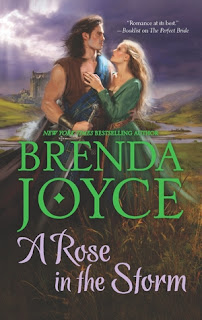 With warfare blazing through Scotland, the fate of the Comyn-MacDougall legacy depends on one woman. Recently orphaned, young Margaret Comyn must secure her clan's safety through an arranged marriage. But when an enemy invasion puts her at the mercy of the notorious Wolf of Lochaber, her every loyalty—and secret want—will be challenged.

And A Kingdom Is At Stake

Legendary warrior Alexander "The Wolf" MacDonald rides with Robert Bruce to seize the throne of Scotland. But when he takes the fiery Lady Margaret prisoner, she quickly becomes far more than a valuable hostage. For the passion between them threatens to betray their families, their country . . . and their hearts.

I won this in Goodreads first reads.

I was in the mood for a good historical romance and I found one. I’m so glad I won this on Goodreads and had the chance to read this great story. The beginning was a little slow but it picked up once Margaret steps into her new home, the castle of Fyne. I was hooked from then on out. One war has just ended and another is about to start. I love battles and adventures…..and ROMANCE!!! Oh how I loved the romance in this book. There was only one part of the book that I didn’t like though. When Margaret goes to Alexander “The Wolf” room and they make love for the first time. I enjoyed it but she was a virgin and the first time with her was against a stone wall. I was hoping it would have been a little more romantic but I will take what I can get. That’s the only part in the book where I thought there was a flaw. The book spans within a year and a lot goes on in this time, Betrayals, loyalties tested and sparks of a new beginning.  What made this book more enjoyable were the characters. I felt like all the characters were well developed and they were very believable. I made connections with all of them. If you don’t like the characters in a book then you aren’t going to enjoy the book. This is not one of those books.  This is the first book I’ve read by Brenda Joyce and I’m eager to start reading her other books. :D

Overall: A Historical Romance that will always be on my favorites list.

Margaret: Is the only woman to dare defy “The Wolf” but she was not about to have her home taken. Although she doesn’t succeed she keeps her head high in hopes of regaining her dowry. She is very intelligent and can maneuver her way around a yes or no question with ease.  She is very loyal to her family, but she doesn’t expect to betray them by falling for the enemy. Love doesn’t pick and choose.

Alexander: I’m going to admit it took me a while to like him. At first we meet him and seizes Margaret’s castle and then he is a little man whore. I was thinking how in the world he could be faithful if he has a different woman every night. He proves me wrong and his and Margaret’s love will forever be etched in my heart. I have come to love the big bad wolf.

Brenda Joyce is the bestselling author of forty-one novels and five novellas. She has won many awards, and her debut novel, Innocent Fire, won a Best Western Romance award. She has also won the highly coveted Best Historical Romance award for Splendor and Two Lifetime Achievement Awards from Romantic Times BOOKreviews. There are over 14 million copies of her novels in print and she is published in over a dozen foreign countries.

A native New Yorker, she now lives in southern Arizona with her son, dogs, and her Arabian and half-Arabian reining horses. Brenda divides her time between her twin passions—writing powerful love stories and competing with her horses at regional and national levels.