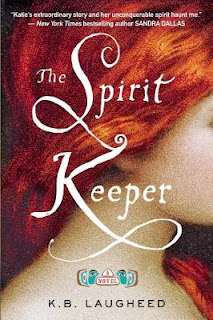 In 1747 Pennsylvania, a trading post on the American frontier was an unsettling place, allowing little opportunity for a woman’s happiness.  This is truest perhaps for seventeen-year-old Katie O’Toole, the thirteenth child of an unhappy Irish immigrant family.   Yet, Katie dreams of a different life, unaware that someone far away was dreaming of her.  Evocative of Geraldine Brook’s Caleb’s Crossing, K.B. Laugheed’s extraordinary debut novel, The Spirit Keeper (Plume Original / October 2013 / $16.00) is Katie’s engrossing first-person account, as she leaves behind her painful past in order to accept a new identity and the great love that comes with it.

When savages raid the O’Toole home, Katie is taken captive by two strange Indians who claim they have been searching for her.  Protected by his companion Hector, Syawa is a gifted holyman who can see the future through dreams.  Syawa claims he has seen Katie in his vision: a Creature of Fire and Ice who will bring a great gift to his people.
Despite her flaming red hair and ice-blue eyes, Katie looks upon him incredulously, but faced with the alternative of returning to her abusive family, she agrees to join them.  Soon, their travel westward takes an irreversible turn.  Katie discovers that to fulfill Syawa’s vision, she must become his Spirit Keeper, embarking on an epic journey that will change her life—and heart—forever.

The Spirit Keeper captures the soul of a young woman on a quest to discover herself during a remarkable adventure across the New World.

“A tale as bighearted as its trailblazer heroine, Katie O’Toole… by turns mysterious, raw, funny, and sensual.  A moving story of adventure, self-discovery, trust and loss, and a testament to how cultures as separate as continents can be bridged by love.”–Barbara Kyle, author of Blood Between Queens and The Queen’s Lady

“Remarkable… a powerful and compelling tale.”–Mary Jo Putney, author of The Bargain

K.B. Laugheed is an organic gardener and master naturalist who has spent a lifetime feeding the earth.  Her efforts have culminated in The Spirit Keeper, her first novel and largest contribution to the potluck so far.
For more info on K. B. Laugheed and her work, visit her website, kblaugheed.com.

Review
The Spirit Keeper is told in a journal- like perspective with the main character, Katie, reflecting back on her adventures. Katie was an okay character. She became a stronger character in my eyes the more the story went on. She surprised me as much as I'm sure she surprised Sawya and Hector.

Other Characters: Katie's family was a bunch of tools. (Get it.. her last name is O'Toole. Nobody? Okay.) Sawya grew on me and could be pretty charming. (: Hector was a bit iffy for me at first, but he grew on me as well. I kept thinking of Dory from Finding Nemo whenever he was mentioned. "Hey Mr. Grumpy Gills." Anyway, he was okay as well. (:

I did have to put the book down a few times before I could really get into it. And when I did get a little bit of a reading flow going, some things slowed it back down again- like the lack of communication between Katie and the guys. While that did bother me a bit, I liked that there was that hurdle. If you are taken by someone who speaks another language, there are going to be communication problems. The book did speed up and I was able to follow along better than I had in the beginning, allowing me to fully enjoy what the story had to offer.

The story-line was very original and the romance was actually quite cute. The progression of the characters relationships was believable and I enjoyed watching the characters grow individually as well- especially Katie.

I believe this is the author's debut work. I have to commend her for doing such a good job on her first novel.

Would recommend to fans of Native American lore or westerns and lovers of romance and adventure with a light touch of paranormal.

Giveaway
The Author has allowed me to give one copy of the book away (US/Canada)
To be eligible, just leave a comment. Any old comment will do. (leaving a way for me to get a hold of you would be great, too) Or I guess I could be nice and give you a form to fill out. Fill out the form and you are entered. Comments will count as bonus entries. I will pick a winner on December.. 23rd. Since that is (tentatively) the last day of the tour.