ARC review: When The World was Flat (And We Were in Love) YA Sci-Fi novel 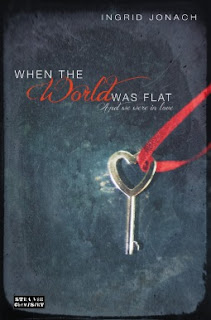 
Looking back, I wonder if I had an inkling that my life was about to go from ordinary to extraordinary.

When sixteen-year-old Lillie Hart meets the gorgeous and mysterious Tom Windsor-Smith for the first time, it’s like fireworks — for her, anyway. Tom looks as if he would be more interested in watching paint dry; as if he is bored by her and by her small Nebraskan town in general.

But as Lillie begins to break down the walls of his seemingly impenetrable exterior, she starts to suspect that he holds the answers to her reoccurring nightmares and to the impossible memories which keep bubbling to the surface of her mind — memories of the two of them, together and in love.

When she at last learns the truth about their connection, Lillie discovers that Tom has been hiding an earth-shattering secret; a secret that is bigger — and much more terrifying and beautiful — than the both of them. She also discovers that once you finally understand that the world is round, there is no way to make it flat again.

An epic and deeply original sci-fi romance, taking inspiration from Albert Einstein’s theories and the world-bending wonder of true love itself

This book was okay. I feel like a lot of books are just repeating the same old story, though. Girl and close friends are hanging out. New boy who happens to be an a**hole comes to town and girl is immediately attracted to him and feel immense connection that transcends time and space. Every time they look at each other sexy thoughts go through her head. Boy acts like he wants nothing to do with her, but she makes an idiot of herself and follows him around like a lost puppy anyway. Boy treats her like sh*t and she keeps coming back. They hang out together even though he claims to want nothing to do with her and acts all mysterious. Another boy enters picture. Boy actually does want her and loves her and there is an immense connection that transcends time and space. It was a little hard for me to understand the actual explanation of the time and space- transcending connection. I liked the idea. I mean, just because it has been told before doesn't mean that there won't be great versions of it told again with better twists and characters. However, I feel like it just fell flat of that aspiration.

I liked the book more in the beginning than I did in the end. In the beginning, I get to know her and her two best friends. One is unattractive and has problems at home and the other is the "man-eater" who is basically all about boys. I really thought I was going to get some seriously deep friendship growth between Jo (unattractive) and the main character since Jo was having problems at home and disappeared from the grid, thereby causing the main character to grow concerned. But that didn't really turn out like I expected. I feel like I was engineered to hate a great many of the characters in the book. I would like to be able to enjoy a few of the characters in the novels I am reading. ):

All in all, cool concept and an interesting beginning, but it fell a little flat of what it was trying to accomplish.