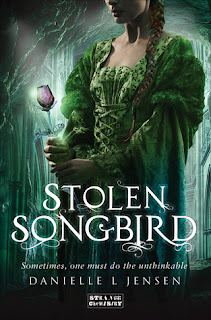 For five centuries, a witch’s curse has bound the trolls to their city beneath the ruins of Forsaken Mountain. Time enough for their dark and nefarious magic to fade from human memory and into myth. But a prophesy has been spoken of a union with the power to set the trolls free, and when Cécile de Troyes is kidnapped and taken beneath the mountain, she learns there is far more to the myth of the trolls than she could have imagined.

Cécile has only one thing on her mind after she is brought to Trollus: escape. Only the trolls are clever, fast, and inhumanly strong. She will have to bide her time, wait for the perfect opportunity.

But something unexpected happens while she’s waiting – she begins to fall for the enigmatic troll prince to whom she has been bonded and married. She begins to make friends. And she begins to see that she may be the only hope for the half-bloods – part troll, part human creatures who are slaves to the full-blooded trolls. There is a rebellion brewing. And her prince, Tristan, the future king, is its secret leader.

As Cécile becomes involved in the intricate political games of Trollus, she becomes more than a farmer’s daughter. She becomes a princess, the hope of a people, and a witch with magic powerful enough to change Trollus forever.

Review
This book was AWESOME. :D It was 436 pages long (ARC) and I loved every page of it.

I loved Trollus. The world the author created was so magical. Literally magical. I could picture the world in my mind and although it was dark and limiting, it held its own beauty. I was both disgusted and fascinated by the trolls and their horrible hierarchical system that put themselves above the half-lings and humans. Their treatment of others was horrible, but as villains they were AWESOME. Some lacked sympathy, some were cowards, and some were just plain cruel.

The characters were not cut and dry. I fell in love with both Cecile and Tristan's characters. The chapters were told in intermittent POVs which I thought worked perfectly for the story. Cecile got chapter 1-7, Tristan told 8, Cecile 9-11, Tristan, 12, then 17 and so on and so forth. The story focused on her, but I never once felt like they weren't both central characters. I am very much attached to them both.

Cecile was a country girl who is kidnapped and sold to the trolls in order to wed the troll prince and break the curse keeping them trapped in Trollus. Her reactions and emotions were believable even when she was freaking out and crying. I mean.. you try being kidnapped and forced to wed a snide and rude troll who is apparently disgusted by you. She is not perfect. She is no wilting flower, but she is certainly no badass ninja. She is a happy medium, but her strength comes from her character and her desire to help others and to see the best in people. and trolls. She makes some stupid decisions, (hey, no one is perfect and I would have done the same in her shoes. Like I said, a believable character) but she realizes and recognizes her shortcomings and tries to make up for and learn from them. A very admirable character.

Tristan. Oh my gosh, I love that boy. troll. whatever. From the first sentence he uttered, full of sardonic humor and dry wit, I knew I was going to enjoy figuring him out. On the outside, he is this cold and hateful troll who despises humans and wants only to break the curse keeping his fellow trolls trapped beneath their city. But Cecile knows he is hiding something and that he is not like the other trolls. As Cecile comes to learn his true nature and feelings bit by bit, it was like she was finding a whole new person under all that hate and beauty. The information was not hard won and he is still greatly shrouded in so much mystery, but I am just dying- DYING- to read more and find out all his dirty little troll secrets.

I fell in love with a lot of the side characters as well. Victor and Victoria were thoroughly entertaining as well as Marc. He was really an integral character with so much darkness in him, I just wanted to pat his head and tell him all would be okay... but I would be lying. Because I don't know anything right now because I just finished the book and I don't know what is going to happen! D: That ending just turned the whole world on its side then smacked it and asked it "Whose your daddy now!?" I was staring at the last page mumbling, "It can't end there. You can't end it there. What happens next? WHAT HAPPENS NEXT?" *sputters* You just can't. I need to. the.. WHY?! THERE IS SO MUCH I NEED TO KNOW AND I HAVE SO LONG TO WAIT FOR THE NEXT BOOK.

You just thought you knew everything there was to know about trolls, but you have no idea. These characters are not the dinky creatures of legend. They are hard, cruel, and just as cunning and deceitful as the royals in the human worlds.

If you love fantasies, romance, and political intrigue, then you really need to add this book to your wishlist and tell all your friends you want it for your birthday, because Oh my gosh, it is my new favorite book of this year. I am going to buy a hardback(if I can) and put that bad boy on my favorite books shelf right beside Graceling, Eon, and The Scorpio Races.
Also, this cover and title are gorgeous and both suit the book splendidly.

**This is an ARC review of the book. Final edition may be different than the one I read.