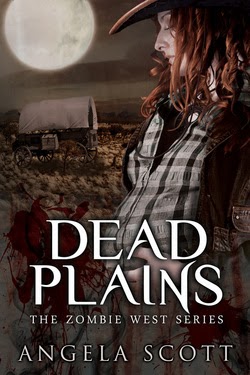 Sometimes, the ones you least suspect are the ones that should worry you the most.

People aren’t always what they seem, as Red has experienced all too well. Strangers are feared, towns are avoided, and everyone’s intentions are scrutinized… even those of the people closest to her. Her coveted ability has been revealed to far too many people, and now that a tiny heartbeat thumps and grows beneath her own, the risk has never been greater.

It couldn’t be a worse time to bring a newborn into the world… but the baby is coming.

My reviews of the first two books
[Wanted: Dead or Undead]
[Survivor Roundup]

Review
I finally got around to reading book three! :D I loved the first two books. Anything that couples cowboys with zombies is alright in my book, but this series has been pretty interesting. The series focuses more on the characters and their relationships, than it does on the actual walkers, but they are still a large part of it.

This book pretty much followed the same theme as the other two. There was some heartache. Some Romance. More characters were added (I love the crazy chick!), but it is bittersweet couples with loss. There was some zombie slashing. I felt like it was a bit repetitive in some aspects, but makes up for it with some random twists you do not see coming. The journey is harder since Red is pregnant and wobbling around the west. She has more unfortunate thoughts and feelings she has to work through. Trace is still a little bit of a goof and has to navigate his own rough patches as well. Poor guy. I really felt for him in this book.

The characters are pretty beaten by the third book, but cannot give up on their dream for a semi- normal life. This book broke my heart a little bit, but I loved the ending. The Epilogue was a great ending to tie up the books. I cannot wait to read Angela's other books. Everything just flows so well, and I can't help but like her characters. Like, I said, this book was a bit slower with less action. I think book one is still my favorite, but I really enjoyed the series. An interesting take on what would happen with zombies in the West.

All in all, Dead Plains was a heartbreaking and raw read that put my emotions through the ringer, but made it all worth it in the end.