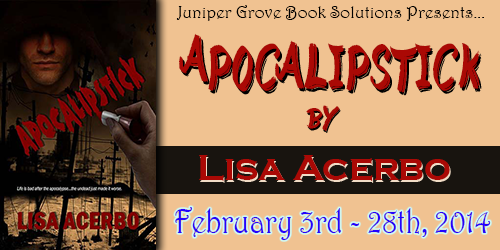 Follow the Tour HERE for more reviews, spotlights, excerpts, Interviews, and guest posts! There is also a giveaway. ;) 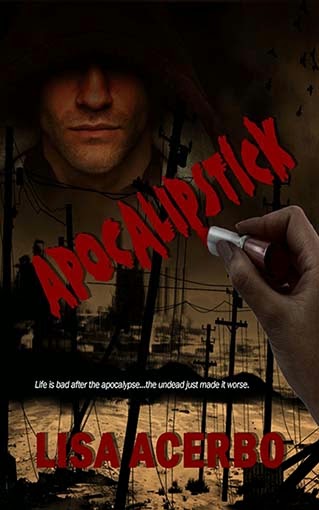 Jenna should be having the time of her life at college. Instead, her only desire is survival. She lives in a world gone insane after a virus kills most of the population. Being alive after the apocalypse is bad, but when the undead return, hungry for humans, times turn darker. For Jenna and a small group of survivors, the goal is to reach the High Point Inn. At the inn, Jenna develops feelings for Caleb, who, while exotic and intoxicating, is not quite human. Will this new utopia last?

Ah. Another Zombie book. It is always interesting to see what fresh angles an author can write the zombie apocalypse from. With so much Zombie fiction out there, it's nice to come across something that has unique qualities.

This book follows the journey of Jenna, an apocalypse survivor. It basically starts off about two to three years after the shit hits the fan and around 80 percent of the United States population dies out due to a mysterious illness. Only, a lot of them do not remain dead, but instead return as Stalkers. a.k.a- ZOMBIES. (Oh Noes!) Jenna was picked up by a rag-tag group of survivors about a year or so before and the story picks up with her continuing journey with the group. However, the book is told from a third person point of view, allowing us a marginal peek inside the other characters' heads as well.

Jenna was a character that was written with a lot of truth to her. She is weak, make mistakes, and becomes despondent and bored, bordering on depressed. She is withdrawn from her group and reluctant to really get to know a lot of them. (Although she does improve marginally throughout the novel. WOO for character growth) Her situation rang true to me, because not every character can be the 'hero' persona who kicks major zombie ass and never tires and just totally DOMINATES when it comes to survival. They never get tired or pass out from sheer exhaustion. They are always strong and can do it themselves, damn-it (Don't get me wrong. I ADORE these characters. hehe. Bad-ass characters are the bomb) I am just saying it is nice to read about the Zombie overtaking with such stark and (frankly, depressing) honesty. There is no hot running water. People stink. The days do consist of mostly staring off of roofs, watching for danger, trying to sleep even though you are terrified, and being completely bored out of your mind. People die. People suck. Nothing is sunshine and unicorns and rainbows..

Speaking of sunshine. I loved the "Others" aspect that was woven into the story. With humans too weak to survive the undead on their own, groups of people are changed by the virus. Instead of becoming Zombies or remaining humans, they are a sort of hybrid of the two. Caleb just happens to be an other. They are so fascinating, because they remind me of a different paranormal creature. I am not going to tell you which one, but just know, it's cool. (: He has a protective personality as well and I enjoyed him as a character. He had an adorable smirk and joked around occasionally, which are never bad things in my opinion. He always knew when Jenna was in a dark place and tried to help.

The romance was cute. (: I liked the progression of the relationship from Jenna being uncomfortable around him, even though she had technically been in the same group with him for a while, to what they do eventually become. There was zombies and other obstacles along the way, but I am content with the way the story ended. (:

Oh! WARNING: There is a smidgen of a love triangle, which I am opposed to, but it was not crazy or incredibly infuriating or anything, so I am good. Besides, he was a bit of a dork, too. (:  Okay, I lied. There's a huge love triangle. lol. But I didn't mind it in this book for some reason. In general, they frustrate me, but yeah.. (:

All in all? A fascinating, darker take on life after the Zombie apocalypse that, while not completely slap you in the face original, can definitely hold its own against the other versions out there. I really enjoyed the elements that set it apart. There was definitely a paranormal feel and I loved it. I read it in one sitting. And Would recommend it to fans of apocalypse novels, paranormal elements, and zombies.

Oh! Oh! Also, gore factor. Woooo. Let me just tell you, my mom would not be able to read it. ;) preview: mucus. sinew. brains. blood. Actually, the descriptions were quite graphic. (: t'was soo gross.

There were a few typos that I found- about 6 or so.

There was definitely a strong ending that led me to believe there will be an additional novel, which I will definitely read. (: 
“By the pricking of my thumbs, Something wicked this way comes…” ran through Jenna’s mind, another remnant of her former life. Now the graveyard was the safest place. Evil openly roamed the streets and it was coming for her.

Jenna blinked the sweat out of her eyes and took a deep breath. She swayed with exhaustion. Angels, symbols of all things God and good, adornments of the dead, swam in and out of Jenna’s clouded vision. She placed a scarred hand on the peaceful, cold stone markers, embellished with the names of forgotten loved ones. Nowadays, loved ones wanted to come back from the grave and claw your face off, devour your insides.

Jenna wanted to lie down and give up. She was tired and had lost everyone she knew. Hair lank and greasy, mud splattered clothing, old and mismatched. Instead of admitting defeat, she forced herself to stay alert, pushing matted, raven hair out of her eyes with a dirty hand. Jenna could not remember a time in her recent history where she felt clean or had a moment in which she was not fighting to stay alive. Looking around the darkened landscape, she wanted to live. She shoved to her feet once again.

There is an international tour wide giveaway.
2 - eBook copy of Apocalipstick with a $20 Amazon gift card

The internet is messing up, so you have to follow the link
instead of an embedded form. O.O I know. Inconvenient.