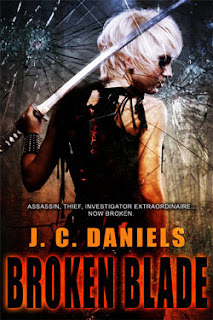 Kit Colbana: assassin, thief, investigator extraordinaire. Now broken. She always expected her past to catch up with her but never like this. Haunted by nightmares and stripped of her identity, she’s retreated to Wolf Haven, the no-man’s land where she found refuge years before. But while she might want to hide away from the rest of the world, the rest of the world isn’t taking the hint.
Dragged kicking and screaming back into life, Kit is thrust head-first into an investigation surrounding the theft of an ancient relic...one that she wants nothing to do with. Her instincts tell her it’s a bad idea to just leave the relic lying about, but finding it might be just as bad.
Forced to face her nightmares, she uncovers hidden strength and comes face to face with one of the world’s original monsters.
If she survives the job, she won’t be the same...and neither will those closest to her.

You can read my review of Blade Song, the first in the series --->HERE<---

Night Blade left me with an Open Wound that couldn’t be healed until I got my hands on Broken Blade. When I got accepted to read Broken Blade on netgalley I got really nervous. I was like do I really want to do this.....and then was like HECK YES! I need to know what happens so I can heal the wound that has just been festering. So I tore open the book like tearing off a Band-Aid. I started reading as fast as I could and the first chapter was depressing. I knew it would be. The book starts about 4 months after they found Kit. She is not the same person. She jumps at every noise and reeks of fear. It tore me up inside to see her like this. I just broke down a couple of times in the book. Kit is very dear to my heart. She is Broken, hence the title of the book. She is living her life in fear now and her friend T.J. told her, do not let him win like her tormentor did her. This book just goes to show how strong Kit really is. No, she is fully herself, she is still trying to find herself but she is almost there. Before all that though she had to make a move and she did when she got a tattoo…..of what, you’ll have to read to find out. Then she decides to take a job, just an innocent job. Or so she thinks. Now she is in head deep with a powerful being that will stop at nothing to get the case that she wants. Kit does what she does best and says some sarcastic comment. LOL I do love Kit. I haven’t even mentioned Damon *PAIN* He really hurt her and she still doesn’t know if she can go back to him. I can see his pain though and I want them to be together. They are so right, they just click. I love there connection.

Kit: Although she is broken she is the same as ever. She will always have her attitude if she doesn’t have her blade. I knew she would get through it, but I knew it wasn’t going to be easy for her. I hope she does recover. Yes, there is progress in this one, but it was torture to read about. Kit the once feared is now cowering in the shadows. This is not a happy read and don’t go in expecting it is. It is full of raw emotion and you better have some tissue handy.

Justin: If it wasn’t for him and T.J. I don’t Kit would have made it. Justin once her lover and healer, now her best friend. He was there for her and swears to be there till the end. It tortures him as well that he couldn’t find her without the help of Doyle. Now he is trying everything to make up for it. I think he is still in like with her as well. IDK though. He could just be doing it to make Damon mad.

Damon: Yes, he is in this one but he doesn’t command the book like he did in the other ones. I do feel bad for him, but I’m still mad at him like Kit is. HE LEFT HER!!!!! After one fight he cut it quits. I’m still stewing over that and it happen in the second book. UGH Damon, WHY?!?!?! I could see his pain and I hope him and Kit can fix things because I do think they are good for each other. Not to mention they love each other. *tears*

Overall: This series just keeps getting better and better!!!!! Although Kit doesn’t have her sword, she is still as kick ass as ever and she is going to make someone pay. Broken Blade was emotional to read at times, but it was full of action and had me tense until the end. Now the wait for the next one is going to be TORTURE!!!

I am aneira. My heart was strong. Now it’s broken. I am broken.

“What kind of crazy bastard decorates a tree with weapons?” 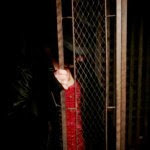 I read, I write and you can find more about me here at my other author name...

J.C. Daniels is the alter ego of author Shiloh Walker. J.C./Shiloh has been writing since she was a kid. She fell in love with vampires with the book Bunnicula and has worked her way up to the more...ah...serious works of fiction. She loves reading and writing just about every kind of romance. Once upon a time she worked as a nurse, but now she writes full time and lives with her family in the Midwest. She writes urban fantasy, romantic suspense and paranormal romance, among other things.

Any one else read this series? I'd loved to talk about it with you in the comments. :D