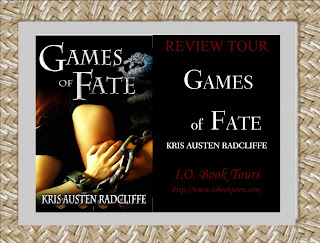 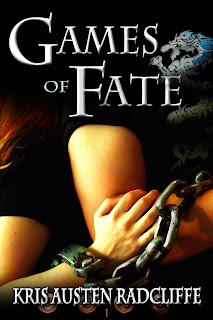 Book BLURB:
GAMES OF FATE
Contains Adult Sexual Content and some violent imagery.
Rysa Torres misses information.  Loses concentration.  Her attention problems randomize her life but she pushes forward anyway, doing the best she can—until monsters activate a part of her she didn’t know she had.
As visions of the future whip inside her head, Rysa realizes the truth:  She’s a Fate.
And she will set fire to the world.
All her options explode.  Her family ripped away, what little control she had destroyed, Rysa is left with one choice:  Will she die to stop the coming flames, or will she allow the man and the dragon she loves to die in her place?
Games of Fate begins Fate ~ Fire ~ Shifter ~ Dragon, a new Urban Fantasy series with Strong Romantic Elements by Kris Austen Radcliffe.  Set in the open spaces of America, the series takes Rysa and Ladon—and Ladon’s companion beast, Dragon—through a landscape punctuated by unfamiliar creatures:  Fates with the ability to see past, present, and future.  Ghouls called Burners who devour with fire and acid.  Shifters who shape much more than their bodies.  And two dragons who speak with color and pattern.
It starts here, now, with one young woman’s fight against a burning future—and against the death of the man she loves.


Rysa has always been hyper active and never thought too much about it, turns out that she is a fate. A fate is a person who can see the past, present, or future. She was activated by her mother and then ran into burners. Burners eat people and they just found an appetizing meal.

Ladon is a warrior and hates fates. So it’s a surprise when he saves one from the burners. He doesn’t know what it is about this fate, but he likes her and so does Dragon.

Will Rysa be his fate or his doom?

I really liked this book, but the writing style I didn’t. It was very weird and I thought I would get the hang of the writing, but I never did. That didn’t stop me from reading it though. I loved the concept of this book and I wanted to know where the author was going to take it. I don’t think I’ve ever read a book about a fate before and this book really intrigued me. This was my first fate book, so I can’t say if this was original or not, but I’m thinking it is. You have a triad of fates that make up the past, present, and future. If one dies the others suffer and get sick. There are shifters which have healing abilities. Enthrallers can make you believe anything that they tell you and Burners eat you can bow things up. Then there is Ladon and his sister, which are dracos. They are attached figuratively speaking to a dragon. They can communicate through their minds and can’t be too far apart from each other. I’ve probably missed some awesome point, but that’s the beauty of reading it and finding out. As you can tell this book was pretty great.

Rysa: She was OK most of the time. As far as a strong character goes she is mediocre. Her parents are out of whack because of the burners. And she always doubts herself. I know in the next one she will come into her abilities and no one will be able to stop her.

Ladon: Has been around for many centuries so you can imagine all the things that he has seen. He has had a rough past with fates so it’s a challenge for him to accept Rysa. He and Dragon warm up to her though.

BIO:  As a child, Kris took down a pack of hungry wolves with only a hardcover copy of The Dragonriders of Pern and a sharpened toothbrush.  That fateful day set her on a path traversing many storytelling worlds—dabbles in film and comic books, time as a talent agent and a textbook photo coordinator, and a foray into nonfiction.  After co-authoring Mind Shapes: Understanding the Differences in Thinking and Communication, Kris returned to academia.  But she craved narrative and a richly-textured world of Fates, Shifters, Burners, and Dragons—and unexpected, true love.

Kris lives in Minnesota with her husband, two daughters, an Handsome Cat, and an entire menagerie of suburban wildlife bent on destroying her house.  That battered-but-true copy of “Dragonriders”?  She found it yesterday.  It’s time to pay a visit to the woodpeckers.