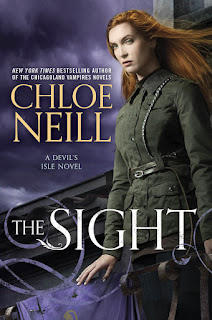 The paranormal war that engulfed New Orleans seven years ago is over.  But the battle for the city is just beginning . . .


Claire Connolly is a Sensitive, infected with magic when the Veil that divides humanity from the world beyond fell. Magic can easily consume and destroy a Sensitive, and if Claire’s secret is discovered she’ll be locked into the walled district of Devil’s Isle along with every other Paranormal left in the city.
Bounty hunter Liam Quinn discovered Claire’s secret, but refused to turn her in. Together they saved New Orleans from the resurgence of magic that nearly destroyed it. But now a dangerous cult is on the rise, and it will take both Claire and Liam—and magical allies within Devil’s Isle’s towering walls—to defeat the occult threat before magic corrupts them both…


Chloe Neill is the New York Times and USA Today bestselling author of the Devil’s Isle, Chicagoland Vampires, and Dark Elite series. She was born and raised in the South, but now makes her home in the Midwest.  When not writing, she bakes, knits, Pins, and scours the Internet for good recipes and great graphic design. Chloe also maintains her sanity by spending time with her boys–her favorite landscape photographer/husband and their dogs, Baxter and Scout. (Both she and the photographer understand the dogs are in charge.)
Chloe is represented by Lucienne Diver of The Knight Agency. Chloe is a member of the Romance Writers of America.

In addition to the Grand Prize Giveaway on Chloe's site, she will send a package of swag to one winner on my blog. :)

The packet will include:


To enter just leave a comment on how you follow the blog (extra points for following multiple ways) and tell us a book that you couldn't put down. That's it. OH DON'T FORGET YOUR EMAIL!!!!!!!! I need a way to contact the winner. Thanks so much for stopping by.
US ONLY and the Contest ends the 19th. :D