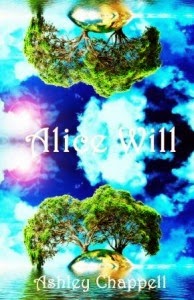 Fourteen year-old Trotter was still just trying to get the hang of the demi-godding business when the apocalypse began. In a world where the gods have withdrawn from humanity, leaving mortals bitter toward magic, she finds herself torn between the human and the goddess in her. As the world begins to fade away and she becomes the prime suspect, her search to determine the cause and prove her innocence ends up revolving around a mysterious little girl named Alice. Then Trotter discovers that not all of the gods had been as distant as they seemed…
Now, with everyone against her and the gods fighting amongst themselves, Trotter is on her own to save her world and stop a spiteful god from using Alice to destroy everything.

I do not make it a habit of reading books that feature main characters younger then 16 or 17, but there was just something about the description of this book that drew me in. And for good reason, too. The book follows the lives of two different girls- Trotter and Alice while following the back-stories of other various characters in the book.

Trotter was an interesting character to follow. She is a demi- goddess who does not yet know the extent of her own power and it was fun watching her stumble her way around in the beginning and then gradually discover who she is. I loved the fact that she is a bit of a clutz when it comes to using her powers. She was funny and I adored her cat companion, prowler. I loved following her on her quest to find out who is responsible for the world fading away.

Alice was the sweetest little girl ever. Her sweet nature and the way she pretended she had a happy life just tugged at my heart. She was a fantastic character and I really loved the bond she developed with the Baron. So sweet. (:

The villain was positively evil. Laramak was a really bad guy, but the author was still able to sort of make me empathize with him. Well, a tiny little bit anyway. (:

The book was an interesting take on the private lives of deitys' and their reactions to the changing world and their followers. There were very interesting concepts and I found myself completely caught up in Trotter's world and her quest to prove her innocence. There was so much creativity and originality in the characters and plot that I had a hard time finding much wrong with it. The explanations were easy enough to follow without being over- simple. That coupled with the humor throughout the book made for a very pleasant read with- out many hiccups. The ending was a bit of a surprise as well.

I would recommend to young adult fans who enjoy original story-lines and concepts coupled with humor all set in a creative new world. A very thought- provoking read with both dark and light mixed in. 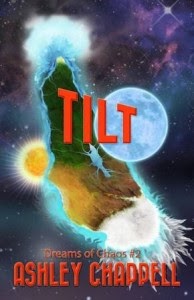 Two years ago Trotter saved the entire pantheon of Realm from a dark god’s revenge. Unfortunately, that didn’t stop the gods from banning her from Realm and – worst of all – from her godly parents for refusing to honor the Accord and declare her dominion. Now even her refuge in Aevum has been destroyed as the world itself is violently tilted and plunged into darkness. Angry and heartbroken, she’s ready battle whatever demons she might find behind the destruction. Instead of evil, however, she discovers another world even older than Aevum and filled with a kind and wonderful species of people the gods created and loved briefly, then abandoned and left for dead in favor of their more entertaining creation: humanity.
In order to save both of the worlds she’s come to love, Trotter will finally be forced to choose a dominion that might mean giving up one world permanently. Yet throughout her struggle she is unaware that the unsettling darkness growing within her is an omen that another dominion has already chosen her…

This book picks up two years after the first one ends. Trotter is still trying to figure out the full extent of her powers while dealing with being banished from her realm. I love that she embraces both of the worlds and takes it upon herself to save them both. I also admire that she was determined to save her old world, despite being banned from it.

Trotter is still a very endearing character. She has new challenges and meets new characters, all of which she tackles with the same humor witnessed in book one. All while continuing to grow as a character. Oh, and Prowler is still awesome, too!

You would thing that after all the creativity and originality that was displayed in the first book that the second book would not live up to it, but the second book was just as wonderfully created as the first. There is plenty of action and humor throughout to keep you turning pages throughout the book. I was highly entertained by Trotter's reaction to the new world. I found the different realms unique and interesting. Mrs. Chappell really can weave together quite a tale.

The bad guys were pretty bad and the pictures painted by the author were beautiful. A fantastic follow- up to Alice Will. Trotter is simply a one of a kind character.

Ms. Chappell currently resides in Huntsville, AL with the love of her life. During her writing time her cats sometimes share her lap with her computer, should they choose to allow the usurpation at all. When not writing, reviewing, or burying her nose in one of her well-worn Terry Pratchett or Neil Gaiman novels, she can be found sailing with her fiancé on their boat ‘Dupracity’ (Fans of Kurt Vonnegut will want to ask her what that means!).

Upcoming Events: Come meet Ashley at the Mysticon in Roanoke, VA in February!