[Review] Where Life Takes You 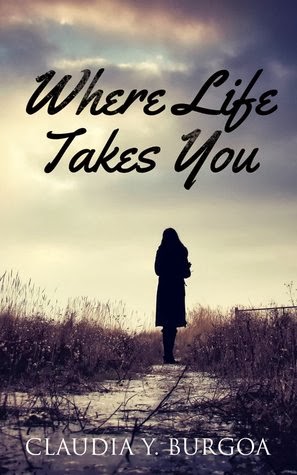 Becca is caught between sanity and nightmares. Between therapy, work, and her constantly looming past she can’t seem to find room to breathe. The memories of her late step-sister, Lisa, are her closest company. But with the help of her best friend and longtime confidant, Dan, she might just learn how to live for herself.

Note: This is the first part of a two book novel

Additional Information about the Book
Becca Trent lived her childhood next to a cruel woman—her mom—who lived to torment and neglect her. During her high school years, her mother married; bringing home not only a new husband, but a step sister her same age. The latter took over her Mom’s role—making Becca’s life miserable. Including stealing Ian—Becca’s best friend and boyfriend—Lisa treated her worse than her mother had for the previous fifteen years. A couple of years later, things ended up in tragedy.

Becca buried that part of her life in the deep corners of her psyche, but that only work during the days when the nightmares didn’t come back to haunt her. Her best friend, Dan gives her that family love she always lacked. Everything was close to perfect, until everything and everyone from her past came back. Now, she’s trying to figure out how to survive and keep that bond which seems now to be held together by a thread.

Review
I am not entirely sure how to start this review. My emotions are all over the place regarding this book. On one hand, I greatly respect the amount of thought that went into the characters. There were deep emotional traumas and side- effects that were addressed as well as very real reactions on part of some of the characters. The ending was very interesting and I really liked the last note she wrote. It gave me hope for Becca as a character. And hope for Dan as well.

On the other hand, both Becca and Dan could be a bit much at time. Dan could be extremely overbearing and moody at times. Steamrolling Becca into things and essentially controlling her life. I equal parts hated and loved him. He was a genuinely good guy who had her best interests at heart, though. But his overreactions coupled with her extreme issues did wear on me at times. Becca has a lot of deep seated self- esteem issues and struggles everyday to get through them. She cannot let go of her traumatic past and it stops her fom coping with some things and seeing what has been right in front of her for years. She always thinks that people hate her and that she is unlovable. She is a very dark and gloomy character, but also sweet, funny, quirky, and love-able at times as well. Both of the characters have these two sides to them. I feel like I know the characters very well. Well, Becca mostly.

I love how the romantic aspect is somewhat strong, but the author takes time to focus on family and friendships as well. Becca comes a pretty good ways towards being able to live a normal life, free of guilt and despair, but she still has such a long way to go. Dan needs to take some time to reexamine the way he pressures and corrals her into doing stuff. I mean, she let him coddle her, spoil her,and run her life for years. She needed him, to. But I love how she is starting to see all the things she needs to fix in her life and making a plan to free herself from her past. I love that she realizes both her own and his shortcomings (although she is way too hard on herself. But she was created as an extremely tragic character. so. yeah.) The end of the book made me very proud of her for finally doing what she had been dancing around the middle of the book. To be honest, I thought she needed to do it a long time ago, but it is better late than never. Atta girl, Becca. Like I said, I'm very proud.

An aspect I loved about this book was the letters, emails, and texts that were sent back and forth between different characters. Their individual personalities really shone through those exchanges. Exchanges along those lines are supposed to be a large part of the next book. I am curious to see how that is handled since such a large bombshell was dropped at the end of this book. Yes, I will be reading the second half of Becca's story. I just hope the doom and gloom can be toned down a little. But I greatly enjoyed this story, so if it is as emotionally draining as this one, I will just have to man up and eat a pint of ice cream after.

I did feel for Becca for a lot of what happened to her, but I did start rolling my eyes at some of the stuff. I can understand a lot of bad crap happening to a person, but jeez, it never let up. Dan and Tyler are bright stars that shine through some of the stuff a little. Their interactions are still tinted with the deep, sad stuff though. I understand that it was written like that, though. Like I said, Becca is a seriously tragic character who has her own personal therapist to deal with her problems.

If you like contemporaries that drag on your soul, but still keep you glued and turning the pages, fearing for the emotional and mental outcome of the lead characters, then I guess this book was made for you. (: Doom and gloom is not normally my thing, but the characters won me over (despite some minor parts where a throat punch was in order.) I look forward to reading the second part and seeing Becca's and Dan's progression.

And I have a little not of my own for Becca's tormentors.

Dear Lisa and company,
You got what you deserved.
Suck it,
Ryan

between  3.5/5  and  3.6/5
[Sometimes the characters really dragged on me, but I would recommend to contemporary lovers with a strong heart.I do plan to read the second book. I can't wait to see Becca's progression.]