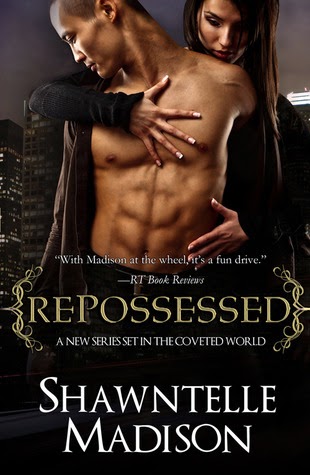 
Return to the Coveted universe with a new series featuring witches and warlocks! Supernatural matchmaker Tessa Dandridge knows a little mist here and a little magic there will help reckless werewolves and precocious pixies find love. That is, until her magical Smythe scroll is lost in her repo'ed car and she can't contact her V.I.P. clients. To connect with an important client cavorting in the fifth dimension, Tessa must depend on handsome Rob Shin, a warlock repo man, to enter Limbo and find her Smythe scroll. Rob has money problems of his own, thanks to the bank determined to foreclose on his elderly aunt and uncle's home. Repossessing magic wands and cursed pianos from disgruntled warlocks isn't the best pay, but the Navy SEAL works well as a repo man to pay off his family's debts. Rob's repossession jobs catch up with him when a powerful warlock seeks to end his life for his constant meddling, drawing Tessa in the middle.

Review
She has done it again. I am so happy that Shawntelle has continued her pattern mixing real world problems with paranormal beings in an Urban setting. Repossessed is completely original and stays with you long after you read it.

One of the central themes of this book is something everyone understands- money. Tessa is trying to stay afloat in her supernatural matchmaking business and is weeks away from hitting a big payday with an extremely influential warlock. The only problem is that he lives in a different realm. This means that she needs a special scroll that she spent thousands of dollars on to contact him and several other clients. The magical scroll that is in her car. The car that was repo-ed by Rob. Who dumped the car in the in-between- a magical place filled with mountains and mountains of repo-ed items that can only be accessed when am item is repo-ed and needs to be dumped. Trying to fill out the paperwork to get her car back could take forever, so Tessa takes it upon herself to bribe the boss in order to make Rob take her on repo missions in order for her to search for her car.

Neither one of them is happy about her tagging along. She causes trouble for Rob and Rob keeps embarrassing her and putting her in ridiculous situations. I absolutely adored how their romance progressed. While going on these fun and sometimes dangerous repo jobs with each other, they get to know each other and develop a romance. Of course the attraction is there from the very beginning, but is held by by their initial dislike of each other. These two are wonderful characters and I can not wait to read more about them in the future.

The book is told in alternating points of view between the two, so I feel like I really got to know them throughout their journey.

Rob is or Korean origin and cares a great deal about his family. He is funny and very good at what he does. He had secrets that he hides from everyone, but he does it to protect them. He is a genuinely good guy and I fell for him in this book. I love that his Korean language and background was a large part of the novel, as well as his family connections. I really like how he fell for Tessa and I just adore their romance.

Tessa is not that great at the whole witch thing. She never put in a lot of time studying, so she is constantly making a fool of herself in front of Rob. She takes a few hard blows, but is resilient and never stops trying to save her business. She is a greatly admirable character. And funny, too. Between her and Rob, I was smiling or rolling my eyes every couple of pages.

The very end got a bit blurry for me, when everything took on a new plot very fast. I was left reeling. I will need some time to switch from the laid back style of this book to the different direction the series will be going in. I am also still trying to puzzle out some of the warlock/ wizard tensions that were explained.

Repossessed is a very unique read with a fun Urban setting full of the paranormal. The romance was sweet and the characters were very endearing with their adorable quirks- which is my favorite thing about Shawntelle's characters. I will most definitely be continuing the series.