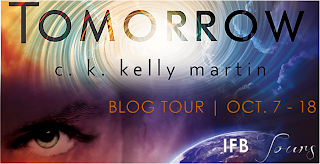 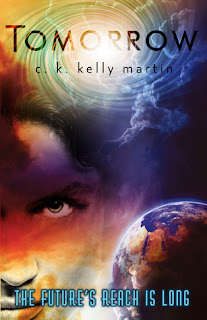 
The sci-fi adventure that began with Yesterday continues with a thriller that can also be read as a standalone.

2063, United North America: climate change has rendered great swathes of the country uninhabitable, the rise of robot workers has created mass unemployment, eco-terrorism is a constant threat and a 2059 nuclear exchange between Pakistan and India has torn large holes in the world's ozone layer and pushed humanity's existence towards a cliff.

Garren and Freya have managed to escape that nightmare world and lose themselves in 1986 Vancouver. But the future's reach is long, and they're no longer safe there. No one is. Shadowy forces are intent on influencing the past's path. And when Freya is taken, it's up to Garren to save both her, and the future. 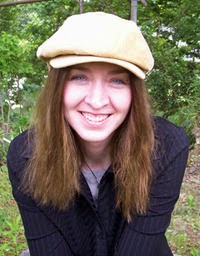 
C.K. Kelly Martin always thought she'd get around to writing in earnest eventually and began writing her first novel in a flat in Dublin, finishing it in a Toronto suburb. By then she'd discovered that young adult fiction felt the freshest and most exciting to her. You have most of your life to be an adult but you only grow up once!
Martin currently resides near Toronto with her Dub husband. She became an Irish citizen in 2001 and continues to visit Dublin often (although not as often as she'd like!) while working on teen novels.

Wow! This book had a very interesting concept. I did not read the first book about these characters, but I like that I did not need to in order to enjoy this book. Although, I would assume it would make the characters more defined in my mind. *shrug* anyways. Moving on.

I am used to books with futuristic aspects and books with dystopian aspects, and this books blends them together is a way that was pretty simple to follow. [I mean, I had to go back and reread like one thing to better understand it. But I did read the book in the middle of the night.. so that may have been just me being tired.] ;) Since we all know that there are a few Sci-Fi novels that can are IMPOSSIBLE to follow, (yes, I have ran into those) I am very appreciative of this.

Wanted to throw in here that I love that the book takes place in a futuristic Canada. I mean.. how often do you hear those words together. Now try Futuristic Canadian Dystopia. haha- Original. Told you.

While I felt like they were not really the main- main focus, I did enjoy the characters. I liked Garren's voice and the relationship between him and Freya. And their cute little cultural references. I did not get some of them. I guess I am not worldly enough, but I did get most of them. That was a cool little added element to the story- considering those are from our past and they are in this futuristic book. with robots. Seems weird, but cool. You know? [I said cool a lot.]

The bad guys. Um. There was a governmental agency that TOOK people's memories. That is horrible. HORRIBLE. And, I mean, it freaked me out because it is plausible. Okay, I don't mean like.. possible. I mean, it totally sounds like something the government would do. Doesn't it? It's some Men in Black S**t, man. So... bad guys= scary. lol. (:

The book did make me think and freak out a little. I keep managing to read these books lately where there are repercussions having to do with nature and how what we do in our everyday lives negatively effects it. It is sort of making me paranoid. *laughs uncomfortably* But I think that may have been the goal of the author- to make me think about these uncomfortable facts- but in a way where I get to read an action packed futuristic story in order for the point to get across.

3.4 :)
Tomorrow is full of cool concepts and a plot that makes you think.. and maybe freaks you out a little.