The Inspiration behind CATCHING A SORCERER
Sara Walker

A billion years ago I picked up Kelley Armstrong's novel DIME STORE MAGIC. Okay, it wasn't quite a billion years ago. It was 2004. I'd just read everything to date by Laurell K. Hamilton and I was looking for something to read between her publication dates. The cover of DIME STORE MAGIC caught my eye (Great job, Seal Books /Random House Canada!), started reading and immediately picked up her backlist, too.

In DIME STORE MAGIC, the recently orphaned witch, Savannah Levine, comes to live with Paige Winterbourne, who is next to become leader of the American Coven of Witches. Savannah haunted me. She goes through so much for someone who should only have to worry about boys and high school. I wondered what a story would be like from her point of view, but Kelley Armstrong kept refusing to write it. She insists we wouldn't want to know all things Savannah was thinking (It's her character, I assume she knows best.), but my mind wouldn't let it go.

Way back in January 2009, I started writing CATCHING A SORCERER. But, wait, that's a lie.

Then one cold day in January 2009, I was making some ruby red grapefruit marmalade. For Christmas I'd made some delicious carrot-orange marmalade and wanted to try making some with my favourite grapefruit. As a word of warning-- don't do this! It stinks like, well, you don't want to know how bad it smells, and it tastes even worse. It also doesn't set properly. But whatever you do, trust me. Ruby red grapefruit marmalade-- don't do it.

Anyway, as I was making this horrible concoction, a voice whispered to me. She told me-- well, I can't tell you what she told me because I although I've cut that bit from CATCHING A SORCERER, you will see it in book #3. But with those magic words, I had to stop everything and start writing. There was a story there-- I wasn't sure what it was yet-- but it was there, and it was good. I put aside the urban fantasy, and started writing the first draft. (In the original opening scene, Gran and Melantha were making that horrible grapefruit marmalade. In the rewrite process, I changed it to mixing a spell.)

So that was four years ago. Why am I just publishing CATCHING A SORCERER now? In a word: life. In a few more words: I wrote the draft in a few months. I actually wrote this book entirely by hand, filling several notebooks. It was a great exercise. I feel closer to the words when I write by hand than when I write straight into a computer. But I also write slower. And revising was hell. Plus I tend to write mostly linearly, but also out of order. Typing it all up took almost as long as writing it the first time, what with deciphering my cryptic handwriting and because I was revising as I went. Then came rounds with critique partners. At one point I sent query letters out. I took it to workshops. And for the most part, I was told the writing was good, but there was no market for witches in a post-Harry Potter publishing industry. I don't know if that's true or not. I felt there was an audience for CATCHING A SORCERER, because other than market concerns, I'd been told it was good.

But I put it aside. Why? Why didn't I self-publish it two years ago? Because I had doubts. No confidence. The rest of the world looked down on self-publishing. (Still does.) Then one day (after writing a few more books) I realized I didn't care what the rest of the world thought. I still believed it was a good book and there's a market for it. So I pulled it out, edited it again. Had a cover made for it, and voila! Self-published it May 2013.

There you have it: the inspiration behind CATCHING A SORCERER. There's a shorter version of this story in the back of the paper copy of CATCHING A SORCERER. I've also included a recipe for carrot-orange marmalade and my favourite hot chocolate. Paper copies are now available at Amazon  and via Paypal  (other venues should be available soon.) 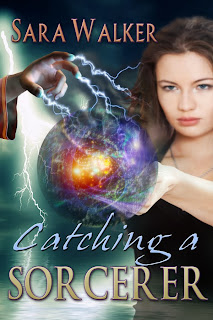 After a sorcerer kills her mother, fifteen year old Melantha is asked to help catch him. She wants nothing to do with it, but then she learns one of her classmates is the son of the sorcerer. With her spell-turner powers not yet developed, the mission will be dangerous, but it will be downright deadly if the sorcerer figures out who she is and decides she will follow in her mother's footsteps. 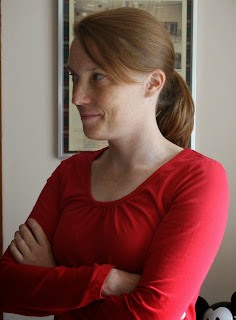 
A former bookkeeper, Sara always preferred books over numbers, and finally put aside her calculator to write stories and work part-time in a library. She is the founder of UrbanFantasyLand.net, a website established in 2008 that specializes in promoting urban fantasy and speculative fiction. Her articles and fiction have been published in anthologies and online.