Breathing Ghosts Giveaway [This book has a gorgeous cover] 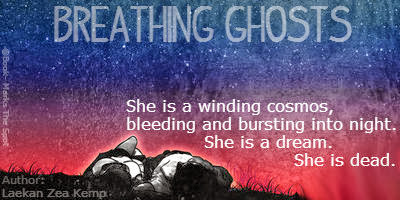 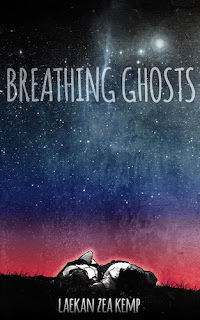 
She is a winding cosmos, bleeding and bursting into night. She is a dream. She is dead.

River has just lost the one thing that matters most to him—Nia—and all she's left behind is a pile of scribbled love notes detailing their past and a pin-holed map planning out their future. Hopes and dreams confined to one dimension now that she's gone and River’s too afraid to leave his hometown, crippled by the same anxiety that’s plagued his mother for as long as he can remember.

But after a strange encounter with the only girl he ever loved a week after laying her to rest, River, armed with nothing but her map and his memories, decides to finally leave and never look back. And with the help of a pair of eccentrically named siblings as well as a mutt with three legs, he sets out to do the very thing Nia always knew how to do better than he ever could—live.

From the moonlit beaches off of Florida's east coast, to the forests of Mississippi, to Bourbon Street, Cadillac Ranch, and the Arizona desert, River is faced with not only Nia's ghost but his own and he learns that in life there are no accidents, only miracles. 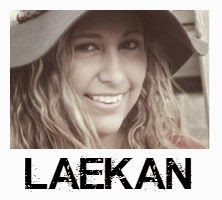 
Laekan is a writer and explorer extraordinaire who grew up in the flatlands of West Texas. She graduated from Texas Tech with a BA in Creative Writing and is the author of the multi-cultural New Adult novels The Things They Didn't Bury, Orphans of Paradise, and the upcoming Breathing Ghosts. Follow her adventures here on Goodreads, on her blog, or on twitter.

A smashwords coupon will be given to the winner to retrieve their ebook.
Good luck!
a Rafflecopter giveaway