Click on the banner to see the rest of the tour!! 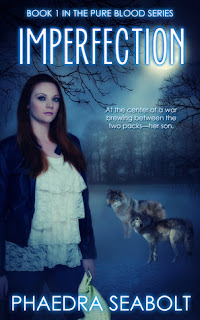 Imperfection by Phaedra Seabolt
Publication Date: July 23rd 2013
Genre: Urban Fantasy
Summary:
Meara Falk always followed her parents' rules, until one night in March when the temptation to let loose changed her life forever. Nine months later, disowned and with a baby on her hip, she discovers werewolves are real after being on the wrong end of one’s teeth and claws.

When her first change is upon her, werewolves attack her home, stealing her son and driving her out of her home. Now she’s looking for the man who kidnapped her baby and turned her life upside down.

A war is brewing between the two packs with Meara’s son being in the center. Will she be able to get her son back before losing everyone she cares about?
Amazon׀ B&N׀ Smashwords

Wow what a book. I usually stand clear of books that have babies involved, but this book also has werewolves, so I took a chance on it. I’m glad I did. I really enjoyed this book and can’t wait for the next one because I know it’s going to be amazing. Well find out more about why Meara is the way she is and did I sense a little chemistry between Garret and Meara. Meep I hope so. They would be a good match.

Now that I have said all that let’s get to the story. The beginning was a typical good girl that decides to let loose a little and ends up drinking too much alcohol. She meets a hot guy and that she can’t resist and goes home with him. She needs to STAY AWAY from alcohol! Unfortunately for her he isn’t a good guy. He leaves her after he practically rapes her and that what does Meara think about that? She wonders if she was good in bed. And did he leave because she was bad. Are you kidding me! Really I think that was the only time I wanted to put the book down. Maybe I’m being too dramatic and it didn’t happen the way I read it, but it was a very thin line. As far as Meara growing in the book…she did, but it was slow going. She still seemed a bit hasty by the end but her protectiveness of her child made her strong. I am expecting big things from her in the next book, starting with killing that bastard Aren and his son. They make me sick. Oh man I haven’t even talked about the wolves in the book. There are Pure woves which are born wolve and then you have the made one, which they were bitten to become wolves. They can’t stand each other and they both want one thing….Meara’s son. *Que dramtic music* :D

Meara needed to grow up fast because she gets pregnant and her parents disown her. She has been sheltered her whole life and learns how to take care of herself. She doesn’t really think things through though, she just acts, which can be good in some cases, but most of them no. I felt a little connection with Meara but not enough to feel sorry for her. Oh I cringed when they took her baby, but she should have stayed and fought.

Amanda: I really liked her. She is very head strong and a loyal friend. She is the most kickass person in this book and you don’t want to take her on. Lol I kinda like her more than Meara at the moment. It may be b/c Meara is new to all this.

Rachael: She is the sweet one that blushes at everything. She is innocent and adorable. It’s sad what happens with her. L I hope that whatever happens next with her, she will be happy.

Leon: I don’t know whether to hate him or like him, so for now, it is both. He decided a little too late that he wanted to be a good guy. He is on my list for the time being until he fixes what he has done.

Garrett: I’m looking forward to seeing more of his hunky werewolf self in the next one. He doesn’t seem all that bad and I think he would be a great match for Meara (if he wasn’t so stuck on Amanda) He is a bit of a perv though. LOL

Overall: A fast paced read that has all the elements that I love in a story. 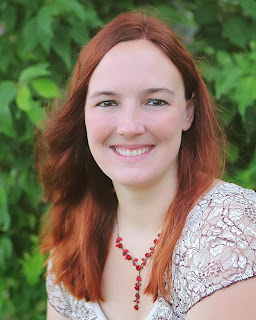 Author Bio
Phaedra Seabolt is the youngest of four and the only girl. She spent her childhood trying to be the best she could be at everything she did which drove her to attend college long enough to attain her master’s degree. Now she is a stay at home mom and happily married.
Social Media Links:
Website / Goodreads / Literary Addicts / Amazon Author Page / Facebook / Twitter / Pinterest / Google+