{Review} A Soul for Trouble (Soulbearer #1) by Crista McHugh 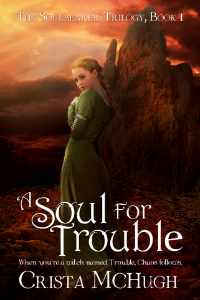 Arden Lesstymine (known to everyone as Trouble) likes attention as much as the next girl, but this is getting ridiculous. When an insane stranger is murdered at the inn where she works, Trouble becomes the next Soulbearer for the disembodied god of chaos, Loku. Yes, it comes with the ability to channel the god’s limitless power, but at the cost of her sanity — literally. Now she has a sexy but cynical knight claiming to be her protector, a prince trying to seduce her to his cause (and his bed), and a snarky chaos god who offers a play-by-play commentary on it all, whether she wants to hear it or not. To make matters worse, a necromancer wants to capture the soul of Loku for his own dark purposes, and the only way he can get it is by killing her first.

I received this book in exchange for my honest review.

Loku, the god of chaos, was ripped from his body after he tried to “spice up the world” a little bit with his scheming. Now he is a soul that wanders from person to person. When his human host dies, he has to enter a new host body. The people he inhabits are referred to as the soulbearers. Devaious, or Dev, is the Knight charged with protecting the last two soulbearers. However, his job Is not an easy one, since the chaotic god is determined to make his life hell.

When the soulbearer enters Trouble’s little tavern, he turns her world upside down. When the host body is killed, Loku enters Trouble’s body. This is a major problem for her. You see, once Loku enters a body, he is there until the person dies- Which means she is stuck with a perverted, devious (albeit hilarious) voice in her head constantly providing commentary FOR THE REST OF HER LIFE. She is also stuck with a handsome knight to protect her as well. In order to teach her to control the newfound powers she possesses, Dev will have to take her away from the home she has always known and train her in how to use her magic.


But someone is after the god of chaos and wants his powers for himself. Plus, it is sort of illegal to use magic in the surrounding realms. So the duo (excuse me, trio) will have to get to the kingdom that allows magic, but along the way have to fight off a mage and his hoard of the undead (cool), villagers determined to burn Trouble at the stake, and the advances of a handsome prince. All while Trouble struggles to remain herself when her mind is being taken over. Because soulbearers always, ALWAYS, lose their minds to Loku long before their time is up.

Trouble. This 21 year old bar maid, who has never been too far out of her town, is suddenly sucked into a world magic and has a god inhabiting her body. I would say she handled it as well as any of us would have handled it… with extreme panic, some tears, and a lot of sarcasm. I must tell you now that sarcasm is my favorite form of communication and between her, Loku, and Dev, there was plenty to keep me entertained. It does not take her too long to come to terms with the perverted god residing in her head. I felt like having your sanity threatened and the reaction to that would be difficult for someone to write. I think the author wrote it rather well. I mean, she accepted it faster than I would have,but then I am not a character in a book= Much to my dismay ;). I like that her feelings for the 2 love interests are not selfish, like the girls being fought over in other books I have read. She does not immediately proclaim herself in love with everyone. She thinks her feeling through throughout the book- even discussing them with Loku. Hey, he’s there, why not use him? Her conflict between the knight and the prince was well- written. She was no fool.  also, she is a bad ass character, who is sensitive to the needs of others.


Loku (god of Chaos)_First off, I want to say that although he was a troublemaker, Loku made me laugh so hard and so often. I mean, this book just would not be the same without his commentary on everything. I just do not know whether he is a good guy or a bad guy. He does some horrible things, but he seems to treat Trouble different than he has treated any of his previous soulbearers. He keeps hinting at having something special in store for her and having “plans”. I cannot wait to read the rest of the series and find out what he has up his sleeve. He is terrifying and intriguing at the same time. I love how his character is written. I cannot wait for more of him in the second book!


Dev, oh Dev, I have to admit, that I fell in love with Dev around seven pages into the book. I mean, Dark Hair + green eyes + muscles + fire wolf (read the book. hehe) + tortured knight + just overall sexiness + elf. I mean, jesus, woman, what are you trying to do dangling a fictional character in front of me as sexy as that? I mean, seriously. It’s just cruel.  And another thing… how did you know I loved wolves, too? It’s scary. You picked all the characteristics I love in my fictional guys AND one of my favorite animals and added extreme awesomeness to said animal? The only thing that could have made him more appealing was if Dev had been an assassin, instead of a knight. Because let me tell you.. assassins.. moving on! plus, he is all shrouded in mystery (another sexy quality). I still don't know his story, but trust me I am dying to find out.

On to Kell. His character seemed a little easy to figure out at first, but as the story progressed, I got to know him better and he wasn't so one- sided. With him, I kind of felt his feelings for trouble were out of character from his womanizing background we are given in the story. However, His character experiences a transformation throughout the book and we see a deeper side to him than the “shallow, womanizing, spoiled prince” He is EXTREMELY open with his feelings. Extremely open. Extremely. He is also openly funny, teasing, and charming- as a prince should be.  I feel like he was true to his character as prince what with all his princely loyalty and such. (:

I am sure that readers will be split between the two guys. (however, I want team buttons made so I can display them on our blog. okay, just the Dev one. :P Juuuust sayin’) ugh, I want to know who she picks NOW.

The conflict. The bad guys in this book were so hard core! I mean, whoah, they were messed up!. lol.. I liked it. :D.  I love how the story flowed in the end to introduce, what I assume, will be the conflict in the next book. It is not something she just pulled out of thin air- it relates to the story and I am SUPER excited to learn more about it. And I am super excited to read more about my  perverted, sarcastic, mushy, cynical (<3), and or bad- ass characters and find out what happens to them next!

It had plenty of magic, mayhem, romance, fire wolves, and lots of sarcasm. Also, do not underestimate the steaminess of this book. I mean... zing

This is seriously my favorite book of this year. I lent it to Tiffany and she said it was one of her favorites, too. So.. GO. READ. O.o