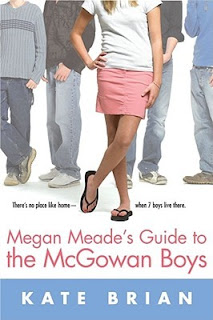 When she was nine, Megan Meade met a group of terrible, mean, Popsicle-goo-covered boys, the sons of her father's friend -- the McGowan boys. Now, seven years later, Megan's army doctor parents are shipping off to Korea and Megan is being sent to live with the little monsters, who are older now and quite different than she remembered them.
Living in a house with seven boys will give Megan, who has never even been kissed, the perfect opportunity to learn everything there is to know about boys. And she'll send all her notes to her best friend, Tracy, in...
Megan Meade's Guide to the McGowan Boys
Observation #1: Being an army brat sucks. Except that this is definitely a better alternative to moving to Korea.

Observation #2: Forget evil, laughing, little monsters. These guys have been touched by the Abercrombie gods. They are a blur of toned, suntanned perfection.

Observation #3: I need a lock on my door. STAT.

Observation #5: Do not even get me started on the state of the bathroom. I'm thinking of calling in a hazmat team. Seriously.

Observation #6: These boys know how to make enemies. Big time.

Megan Meade will have to juggle a new school, a new family, a new crush -- on the boy next door, as in next bedroom door -- and a new life. Will she survive the McGowan boys?

Megan’s parents are both in the army and that means that they are always on the move. After two years in the same place, she is finally making friends, when her parents tell her that they are moving again. She refuses to go to South Korea and her parents give her the decision to go with them or move in with the McGowan’s.

The moment she gets to the McGowan’s house she wants to leave. She doesn’t know what she got herself into. Everywhere she looks there is a hot boy and the two oldest are the hottest. She likes Evan right away, but she has other things to like about, like school and getting on the soccer team. On her first day she realizes it’s not going to be easy as she thought. Megan just wants to play soccer, is that too much to ask for? Apparently it is and Megan will be put to the test. She is going to find out that not everything comes easy in life and that sometimes you have to stand up for yourself and say how you really feel.

This is Megan’s guide to the McGowan Boys.

What the hell kind of ending was that?!?!?!?!!? Was that even an ending???? Yeah I guess you get some kind of closer, but you really don’t know what happens to her and the boys. Is there going to be another one??? If not I’m going to be highly upset!!!! I’m not even kidding right now. I have never been so mad at an ending before. Not distraught or anything like that, I just wanted to know what is going to happen with her and the boys. What’s her senior year going to be like? Other than the ending I liked the book. It was interesting watching her with all the boys. I don’t think I would have survived. And I totally know how she feels being the new girl at different schools. I liked how she was sweet and considerate. She was true to herself and was just a down to earth girl.

Evan: The golden boy who can do no wrong. He is the hottie of the school and he knows it. He is a nice guy and flirts with everyone, but everyone has another side.

Finn: He is quite until you get him talking. LOL but that goes for anyone. :D oh and did I mention he love to paint. *SWOON*

Doug: He is the wannabe gansta. He is a real jerk and doesn’t try to hide it. He only thinks about himself, but like I said everyone has another side to them.

Megan: She is a tomboy. She likes soccer and doesn’t like pink. She is herself and doesn’t try to change herself for anyone. She is a really sweet girl and is always thinks of others before herself. Her only downfall is she wants everyone to like her and there is always going to be that one person who hates your guts.