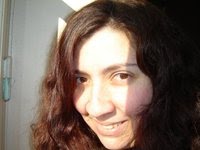 Marilyn Almodóvar is the author of a series of YA paranormal novels. Born in Ft. Huachuca, Arizona, Lyn is a lover of words whose reading tastes range from Victorian novels to the books of Stephen King. Her favorite past-times have always been reading and writing, two activities that let her escape to other worlds.

It was this love that propelled her to choose Theater and French as majors in University, with a minor in English Victorian Literature. Lyn lived for almost a decade in England followed by three years in France before returning home to the States. A self-confessed citizen of the world, she is fluent in English, French and Spanish, with basic knowledge of the Italian language.
Lyn could happily exist breathing the clean air of Narnia, trapped in a cupboard under the stairs with Harry, fighting alongside Captain Jack Sparrow, doing an internship in Torchwood, or traveling around time and space with the Doctor…as long as she can have Mr. Spock, Captain Kirk and Captain Mal as companions.

Lyn currently lives in Central Florida with her French husband, English-born eldest son, and French-born youngest son. Her debut YA Novel, Interred, will be published by Iambe books on 01/22/2013.
Website / Twitter / Goodreads / Facebook 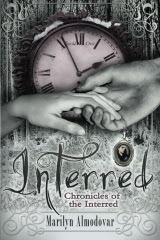 Time has never been an issue for Baxter Jacobs, but then she never knew she had the ability to Bend it.

As her sixteenth birthday approaches, Baxter inherits a pendant that will change her life. Connected to the pendant is a dark and mysterious young man named Declan Ashdown. Trapped in a Time loop for the past 122 years, Declan needs Baxter’s help to escape. The only problem is, she has no idea how to do it.

To acquire the power she needs to free him, she’ll become one of the Interred, those whose Magical abilities emerge as they come of age. When she does, she’ll discover that Declan isn’t the only one interested in the fact that she’s a Time Bender.

As the Interment arrives, Baxter knows this will be no Sweet Sixteen. A vengeful relative and ruthless Council are determined to control her. Declan’s powerful and charming descendant, Jack Ashdown, claims he can save her. She’ll soon have to decide who she can trust, and how to master her new abilities before Time runs out.

Add it to your Goodreads! / Buy it on Amazon!

And now, a brief Review from your's truly

Well, I am just going to have to come right out and say it. This book sort of blew my mind. First off, the names of the characters were totally freaking awesome. Baxter and Declan? Jack's name isn't awesome, but I can forgive him, because he is awesome. I love the name Declan. I know, irrelevant, but still. moving on.

The whole concept that the kids come into their supernatural powers at sixteen is really interesting. I mean, they are just automatically gifted with these amazing powers, that they have no way of predicting what they are going to be.
Concept of a hot guy with a cool name being trapped in time and Baxter is the only person who can see him because she can bend time. OMG, YES! That was totally awesome and excellent creativity on the author's part.

I do not want to go into too much detail about the boys, Declan and Jack, because I am afraid of going on forever, but whew. It is kind of cruel to trap a girl between a guy and his ancestor. haha. I mean it is like having  a guy interested in you and also having his grandpa interested in you! I am just saying. but I loved both the guys for separate reasons.

I though it was remarkable being her first work. Everything about the book is attractive: Cover (love, love, love the cover), the concept, and the names. I was drawn in by all of those factors and the promise of a good magical read and i was not disappointed. I cannot wait to see what happens to the trio in the next book in the series.

Also, a side note: her mother is kind of awesome. Just thought I would throw that in there. (:

The Author has generously [wow, I have said generously a lot. sorry.] included an AWESOME GIVEAWAY with the tour. here are the details:

Here is the Rafflecopter code:

Good Luck, guys! This is a totally amazing prize pack that I would not mind having. ;) Don't forget to add the book to your to- reads shelf on Goodreads or wishlists on Amazon! Also, if you feel the sudden urge to go and like Mrs. Almodóvar's page or fan her on Goodreads, I am sure she would not be opposed to the support! G'day peeps. Also, make sure you check out the other stops on the tour.
You can click the tour banner up at the tippy top of the page- or- if you are feeling lazy, Just click riiiiiight---->HERE<----
Posted by Ryan Snyder at 12:00 AM