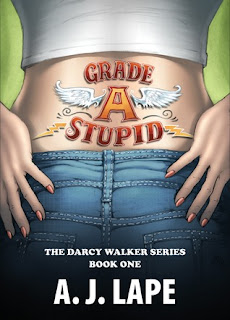 Fifteen years ago, Darcy Walker's parents thought it was a good idea to give her a unique name: Darcy, meaning "dark walker." Whether that was a stroke of genius or stroke of stupid, they definitely nailed the irony. She lacks direction, her grades stink despite a high IQ, she's boringly average--although flirting admirers claim otherwise--and God help her, she's infatuated with a bad-boy.

A bad-boy that her hottie best friend, Dylan, wishes would get acquainted with his fist.

And, oh yeah, there's that tattoo that was a royally stupid idea.

With her life spiraling out of control, everything changes when she skips class and finds a dead body...in fact, it gets worse. It jump starts Darcy's inner-verb, and her brain hard-wired for action gets caught up in a situation she can’t let go.

Set in the fictional Cincinnati town of Valley, Ohio, Darcy falls into a world of threats, violence, and gangland exploits chasing down every clue to finger the murderer. When a fellow misfit is fingered for the crime, Darcy goes from zero-to-sixty trying to clear his name--constructing aliases, breaking the law, everything that makes perfect sense to her but reeks of Grade A Stupid to everyone else.


Darcy is like any other 15 year old girl except she finds a dead body in a dumpster while skipping class. You would expect her to call the police. No. Not Darcy. She investigates and tries to see if he is still alive. It was still on her mind and she becomes determined to find out who did it when a fellow class mate is accused of the crime. How far will she go to find out the truth and when she does will she live to tell who the killer is. Not to mention sorting out her feeling for Liam and Dylan. Welcome to Darcy’s world. :D

This book was just AHHH that’s all I can say. It was just that good. It was sooo not what I was expecting. I have no idea why it crossed my mind that this book was going to have some paranormal element in it. LOL I felt like such a fool. That didn’t stop me from reading and I’m glad that I continued. I was addicted from the start. I was trying to figure out who the killer was the whole time. I was like WHO IS IT!!!!! And when we finally figure out whom it was, the person only crossed my mind once. There was so many things going on and so much information being given, that you would think you would become confused, but I didn’t. There was just so much mystery and danger, it was fascinating. Darcy is unlike any character I have ever seen before, but I’ll talk about her later. Even though it was full of danger, I was laughing most of the time. Darcy was just hilarious!! Other times I was sad and biting my nails from all the suspense. The whole book was written fantastically and I wouldn't change anything about the book or the characters. I can’t wait for No Brainer and see how much more trouble Darcy can get into. :D

If you love a book with a good mystery that is jam packed with danger this is the book for you.

Darcy: Darcy was ADD to the max. Nothing ever kept her attention except for finding out who the killer was. She doesn’t do anything like a normal teenage would do. She is always getting into trouble for the simplest of things. To top that all off she is hilarious, if I wasn’t cringing with fear for her I was laughing at her. She was a highly enjoyable character.

Dylan: He was totally protective of Darcy. Heck he was protective of everyone that he loved. There were some times where I was like he needs to back off. He would tell Darcy what to do and she would do it. Other than that I really liked him. I wish that we could have figured out a little bit more about him in this book, but there is always the next one. ;)

Liam: Liam is tall, hot and every girl in the school wants him. You think I would be ecstatic that he likes Darcy, WRONG. He is a Fastard. If you want to know what it means you have to read the book. LOL Anyway he just has a lot of secrets and I can tell he is just playing around with Darcy to get at Dylan.


“Liam!” I yelled. “I see you, I see me, and a lot of foggy windows underneath the midnight blue sky. I don’t know, throw in some baby-making music, too.”

5 STARS
5 Course meal. This book was “Da Bomb”! I devoured it in one sitting. I loved everything about it! Would definitely recommend.