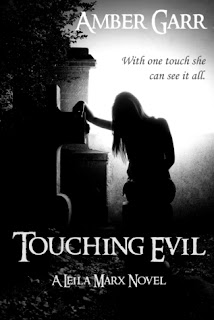 With one touch, Leila can see it all.

Leila Marx is trying to put her life back together after her fiancé is murdered. When Detective Garrick Pearson enlists her help with a difficult case, she is thankful for the distraction and the opportunity to use her talents as a touch clairvoyant. Leila and Garrick delve into the mystery behind a series of missing teenage girls and mummified corpses while discovering their own growing attraction to each other.

Conner Hoffman is an intriguing lawyer and striking half-demon who enters Leila’s life unexpectedly. Although her visions are terrifying, she is fascinated by his charm and his legacy. When it becomes evident that the murders are linked to a paranormal event, Conner introduces Leila to a world unbeknownst to ordinary society. She suddenly finds herself immersed in supernatural politics, sorcery, and danger as she becomes the killer’s next target.

Staying alive will mean relying on friends, accepting the unbelievable, and trusting in her heart again.


Leila Marx hasn’t been the same since her fiancé was murdered. What’s worse is that she saw it happen and there was nothing she could do about it. She is a clairvoyant and when she touches something she gets a glimpse of the past. On a rare occasion like with her finance, she can see future events. Her life is still on hold a year later until detective Garrick asks for her help. Girls are going missing and turning up brutally murdered. She thinks it’s going to be simple, touch something of the victims and she’ll know what happened and who did it. Turns out it’s not and what she sees will change her life forever. To top that all off Connor enters her life. She gets a creepy vision of him that she wished she could erase. After another girl goes missing, Conner decides to tell her the truth. What she learns is hard to believe, but she will stop at nothing to bring the girl home and bring down the sicko who is doing it. The question is, is she in to far over her head and will she make it out alive to see who the real killer is?

I’ve read other clairvoyant books before, but nothing like this one. The other one that I read, she could see into the future and this one see can see things when she touches objects. Which I think is way cool by the way. :D I loved the secret paranormal underworld and the mystery as well. This book had me laughing and crying throughout the entire book. Leila was very vulnerable during the book, but that didn’t stop her. With her not knowing much about her gift added to the story. I was learning with her how to use her gift and whatnot. Although the book was depressing in some parts, don’t’ let that stop you from reading it. This was an enchanting read and I can’t see what happens in the next one.

Leila- Like I said up top she is still coming to terms with losing the love of her life.  Know it’s been a year since her dies, but I think she handled it pretty well. I mean how do you deal with that? I lost my granddad and it still hurts everyday. So I know how she feels. She is a very strong woman. She also handles the paranormal world well too. I would be freaking out. I guess it helps being what she is. I loved her determination. I hope she learns more about her gift in the next installment. :D

Garrick- I was hoping to get a little more information about him. We know that he is a good guy and he is not married. He is a detective and that’s about it. I want more background info on him in the next one.

Conner- We get a little more info about him. Like what he is and how old. Why he is the way he is. I really liked him under the circumstances. I think he really wants to change and become a better person, but for him that is impossible. L I really really hope he is in the next one. If not I’ll be very disappointed.

The Cover: When I first saw the cover I didn’t think it was anything special. When I finished the book, I was like this is the perfect cover for this book. It totally goes with the story and I love when a cover looks like a scene in a book. 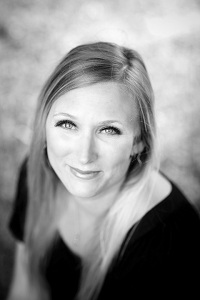 Amber Garr spends her days conducting scientific experiments and wondering if her next door neighbor is secretly a vampire.  Born in Pennsylvania, she lives in Florida with her husband and their furry kids.  Her childhood imaginary friend was a witch, Halloween is sacred, and she is certain that she has a supernatural sense of smell.  She writes both adult and young adult urban fantasies and when not obsessing over the unknown, she can be found dancing, reading, or enjoying a good movie.

As being a part of this tour I can offer one of my followers a ebook copy of Touching Evil or Furthermore. :D Good luck and anyone can enter.