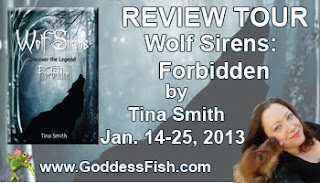 Hey! We have an amazing book on tour here today. Its Forbidden, the first book in the Wolf Sirens series. Today, we have a review of book one (Forbidden) complete with blurb, an excerpt from book 2 (Fever) complete with blurb, A bio of Author Tina Smith, and also, the opportunity to win stuff related to her series! Are you ready? Then, lets get to it. (:

As always, we start with the lovely author: Tina Smith

Tina Smith is an herbalist, dog lover, Piscean and mother with a fondness for strong female protagonists. A love of the fantasy genre and the deep exploration of dark and evocative subjects inspired Wolf Sirens Forbidden. The sequel Fever further unfolds the tale of the heroine femme fatal, on her journey in the underworld between the lands of myth and reality.

“Rich, complex, and deeply fascinating. Smith’s creation stands apart from other books in the genre. Wolf Sirens has raised the bar for paranormal romance.”- Kevis Hendrickson, author of Rogue Hunter

"Smith weaves a thrilling and beautifully crafted tale that sinks its fangs in and refuses to let go."- Michael Alexander, author of The Vessel

“Fever does not disappoint! Tina Smith captures her readers on the first page and leads them on a fast-paced journey full of suspense and adventure as heroine, Lila, struggles towards the truth.” - Beverley Eikli, author of A Little Deception 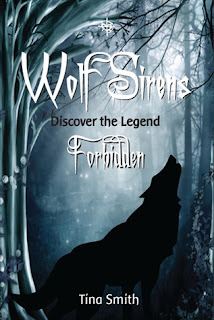 When Lila unwillingly moves to the country town of Shade, she can’t imagine the life-altering events that lie in wait for her. Shade has a curfew and has always been surrounded by myths. A central feature of the town is its famous statue of Artemis, Goddess of the Hunt, whose spirit is said to protect the innocent.
Lila falls in with a group of intriguing teenagers with luminescent eyes and soon she is drawn into the shadowlands of fantasy and reality, where destiny collides.
A mysterious local girl, Cresida, warns her to stay away, but Lila is drawn to them like a moth to a flame.
Cresida knows their fatal secret and she is honour-bound to protect those who are endangered. But she underestimates Lila’s passion for the mysterious and charismatic clan of youths. Lila begins to feel a call she cannot ignore. Yet her heart is filled with vulnerable desires that begin to turn the underworld upside down, for both hunter and hunted, as she learns they have been waiting for her…
Inspired by the legend of the mythical femme fatale, Wolf Sirens is an intimate tale of unrequited and forbidden love in the underworld, a masterpiece of romance fantasy.
Amazon
Goodreads
Like her on Facebook
video

REVIEW of Forbidden (book shown above)

The books starts out with a girl and her oblivious mother moving back to her mother’s hometown. The town has secrets and mystery surrounding it. There is a curfew in effect. Being out after dark is dangerous for the humans- especially tourists.

The first few days of school for a new kid are always awkward, but for Lila, they are almost unbearable. There is a strange feeling in the air and everyone is looking at her weird- especially the group of beautiful and strong popular kids. The popular kids at first give her the cold shoulder, then suddenly decide she would be the perfect person to join their dance team.

Lila is warned away from the new group of kids by a strange girl who spews crazy talk about wolves and rules. Lila suspects the kids don’t really like her and that they are playing some sort of prank on her. She hangs out with them, despite her reservations and finds she likes to be with them. She loved that power that comes with being associated with them. And the guys aren’t too bad looking either. She gets comfy in her new niche, finally having friends and even a hot boyfriend who Is extremely into her. But why does the strange girl still warn her away and why is she still spewing nonsense about protecting Lila from “them”. There is something going on with these teenagers and Lila, despite the strange feelings and weird shifts in her mood, wants to be a part of it.

Lila started confusing me about halfway into the book. She had so many contradicting feelings about the other characters in the book. She starts to change dramatically. She becomes a person even she doesn’t like. But there is a reason for this. I am so glad there was a reason for this and it helped me not to be too harsh on her. Whew.

I love the incorporated mythology into this book. Athena and the goddess of the hunt has been taught to us at at some point in at least one class in school. You can relate to it. I found it interesting before, but after reading this book,  I love the story even more. The uniqueness of this book surprised me. The Authir did such an amazing job of coming up with something new. I will not get this book confused with another similar work- because there is no book near this one.

I thoroughly enjoyed this book and was shocked at the end. I had not expected that. The author took risks and they paid off.  This book intrigued me at first, kind of make me dislike it… then snapped me back to attention. Once I hit the middle part, it took me a few days to make myself finish it sine I was mad at Lila, but once I returned to it, I was glad I did.

If you want a book with Mythology, mystery, heartache, confusion, romance, and –oh, yeah- wolves, then check this series out 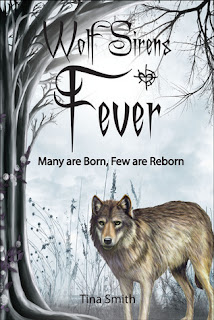 Temperatures rise as the flames of longing still burn in the thrilling sequel to Wolf Sirens Forbidden. The legend continues. Apollo, god of deadly plague, conspires to undo his sister’s legacy. The wolves exist between two worlds, one in the town another in the forest.

Prophecy says hunters and wolves are cursed to a mutual attraction. Increasingly, each successive slayer becomes more alluring to the wolf. The predestined enemies struggle, to both resist and contain their fierce rival in a conflict powerful enough to tear two worlds apart.

A shadow has fallen over the heart lands of myth and reality. The chosen is reborn broken-hearted, in the scorching embers of grief. Devastated, Lila trains tirelessly as the assassin. She must submit to deliver justice and protect the innocent of Shade.

But is it love or revenge which motivates her?

Will the huntress or her heart prevail? Breaking away from the call of destiny and fearing betrayal, Lila makes a desperate escape in search of her lost beloved. The intensity between two ancient enemies ignites. The history of the wolf pack is revealed as devotion and desire in the underworld reaches fever pitch.

If The Bite Doesn't Get You, Then the Fever Will

The sun shone in the windows downstairs. Clean skinned, I descended the staircase in the silence, dressed in my grass-stained, ripped, thinning jeans and a clean singlet top, my dark hair soaking the material. The air was warm, it was late summer. The sounds of birds singing and fluttering in the birch and sycamore trees outside the kitchen screen door told of a fine day. Buds bloomed on the purple Agapanthus. I opened the fridge and made breakfast, surrendering to the hunger in my deprived stomach. I needed to keep my strength up.

Chewing my cereal with little appetite, I could feel that my nose had dried up; the sharp pain in my throat had subsided completely. The horrible dread, though, dragged through me still like the hands of death raking down my skin. The nightmare feeling of reality was worse than a dream, torturing me. I had to localize this feeling… and then I caught her scent.

When I turned around in the kitchen, Cresida was there. I had smelt her shiny olive skin. I knew I had waited for this opportunity.

“Teach me…everything,” I said dully, turning back to the sink.

“You look better,” she commented. Apprehension kissed her tone. I wasn’t to be trusted anymore - hence the missing bullets.

I turned again and stared at her, my lip curled. I knew what she meant. My skin was pale and glowing and the ghostly grey was gone from under my eyes, which glistened a clear green/blue hue. A stranger’s face had looked back at me from the bathroom mirror this morning, with pale smooth, luminescent skin. I had awoken as her or had she awoken as me? Any evidence of pain and sorrow was not apparent from the outside. I now donned the huntress’s shell. My hands were her hands now. She had become me.

Giveaway
You heard right. Tina has a giveaway going on over the course of the Book tour. Tina will be awarding jewelry in theme of her books (wolf charms, charm bracelets etc), 3-D book marks in shifter themes (Wolves, tigers, panthers etc) and Sun catchers (beaded glass and crystal) to a randomly drawn commenter during the tour!

So if you want some goodies, follow the tour and leave some nice words in the comments. :) Yeah, it's pretty flippin' awesome that she is doing this for you guys. You should go and like her facebook or amazon page to show your thanks. *wink*

Tour dates and stops can be found --->HERE<--- as well as if you click the tour banner at the top of the page... But why would you go all the way back to the top of the post to do that? :O I have no idea. Maybe you're just weird.

Thanks for Stopping by! (: