HEY GUYS!!!!! I’m pleased to have the amazing ST Bende on the Blog today!!!! She has graciously written a little guest post about Norse Mythology which I’ve already read and loved. :D But before we get to the guest post let’s learn a little more about her and her book, Elsker. ^_^ 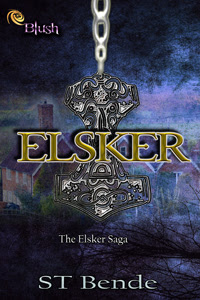 Blurb: Kristia Tostenson prefers Earl Grey to Grey Goose and book clubs to nightclubs, but when she transfers from her one-stoplight town to Cardiff University in Wales she falls in love with Ull Myhr. Her new boyfriend isn’t exactly what she was expecting. He’s an honest-to-goodness Norse God — an immortal assassin fated to die at Ragnarok, the battle destined to destroy Asgard and Earth. Kristia’s crazy visions are the only thing that can save their realms.
Her orderly life just got very messy.

ELSKER - Book 1, THE ELSKER SAGA
At eight o’clock, a firm knock interrupted my reading.  I picked my way through the flower shop that our living room had become and opened the door.
“Oh good, you kept my peace offerings.”  Ull treated me to a rakish grin.
“Just a few of them,” I muttered.  “Come on in.”
“Oh, no.  You must come with me.”
“Why?”  I challenged.  Ull sighed.
“Are you going to fight me at every turn?”
“Probably.”
“Please come.”  He looked so adorable standing on my stoop, his scarf casually thrown across the grey sweater under his coat.  I gave in quicker than I meant to.
“Fine.”  I grabbed my coat from the closet by the door and shoved my keys and wallet into the pocket.  “Where are we off to?”  I closed the door behind me and followed Ull into the brisk night, waiting for his promised explanation.
But he didn’t say anything.  Instead, he put his hand on the small of my back and guided me away from campus.  I shivered and noticed that Ull wore his jacket open, at ease in the chill.  As we rounded the corner, Ull dropped his hand to clasp mine.  It was so warm, so strong, and for a moment I forgot to be mad at him.  We walked in silence as he led me down the main road.  After two right turns, I found myself standing in a quiet garden.
Ull had brought me to a church. 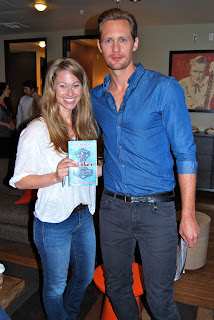 Before finding domestic bliss in suburbia, ST Bende lived in Manhattan Beach (became overly fond of Peet’s Coffee) and Europe… where she became overly fond of the musical Cats.  Her love of Scandinavian culture and a very patient Norwegian teacher inspired The Elsker Saga.  She hopes her characters make you smile and that one day pastries will be considered a health food.

^_^ In case you were wondering, why yes, that is Alexander Skarsgard who plays Eric Northman in True Blood. :D He was the inspiration for Ull in Elsker. :D and she got to MEET HIM IN PERSON AND HE SIGNED HER BOOK!!!!!!!!(End fangirl moment) That is beyond awesome and you can read more about er meeting him--->HERE<--- Now on to the Guest Post you've all been waiting for. YAY

Hei hei. I’m ST and I love IndyCar racing, skiing and baking. I write books about Norse mythology, and I’m super excited to be here!

One of the things I love about Norse mythology is that it’s very dark. The gods are marked for death at an epic battle called Ragnarok. Odin’s blood brother continually turns on Asgard and sells his family out to every cretin imaginable. The jotun/giantess Skadi threatens to destroy the entire realm unless someone will marry her, already.  Norse myths have such rich material for storytelling; they’re like one giant playground for an author!

When I was researching Nordic legends for Elsker, I noticed one theme ran through a lot of the stories.  Scandinavian mythology puts a lot of stock in visions -- there are volumes on characters that have or want to have prophetic abilities. Odin gauged out his own eyeball and gave it to a giant in exchange for wisdom (which some read as prophetic sight). There’s a prophetic trio of sisters called the Norns, who predict the fates of the gods. And there are countless stories of seers, or seiðr, throughout pre-Christian Scandinavia.  Asgard and its descendents put a lot of faith into those who could predict the future.

I took that storyline and ran with it in The Elsker Saga. In the first book, Elsker, twenty-year-old Kristia is a perfectly ordinary small-town girl with a big time problem -- she can see things. She has random flashes of the future at highly inconvenient times, and her entire 300-person town thinks she’s two pies short of a picnic. She has no idea how or why she’s been saddled with this ‘handicap’… until she falls in love with the Norse God of Winter/Asgardian Assassin, Ull Myhr. While Ull’s world is falling apart around him, Kristia’s is finally starting to make sense. After all, sometimes finding your destiny means doing the exact opposite of what The Fates have in store.


So what do you think, pretty cool, huh????? If you want to ask ST about her book or Norse Mythology just comment below and she might stop by. :D