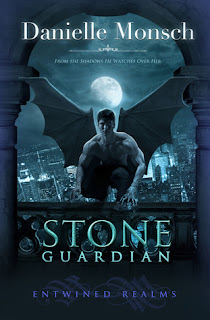 Gryphons flying past skyscrapers? Wizards battling it out in coffeehouses? Women riding motorcycles with large swords strapped to their backs? All normal sights since the Great Collision happened twenty-six years ago.

Well, not normal for everyone. Larissa Miller may have been born after the Great Collision, but as a history teacher who lives in the human-only city, she has never come into contact with any other race or species, nor has she wanted to. Her life is as ordinary as it gets - that is, until one day she walks out of her apartment and is attacked by a mob of Zombies, only to be saved by a Gargoyle.

Gargoyles trust no one outside their Clan, but due to a cryptic prophecy, Terak, Leader of the Gargoyles, has been watching over the human woman for months. While he can find no reason why the woman has been singled out, something about her stirs every protective instinct within him. When the attack confirms that the threats against her exist and are real, he convinces Larissa that though their races have never been allies, the best chance of discovering why she has been brought into his world is by working together.

In the course of their investigation Terak becomes entranced by his little human. But when he discovers why Necromancers want her and the great reward that awaits him if he betrays her, he must choose between the welfare of his Clan and not only Larissa’s life, but the fate of this New Realm as well.


I received this from Romantic Geek Publishing for my honest review.

Larissa was born after The Collision and hasn’t run into the things that go bump in the night. Even if she wanted to, her father wouldn’t let her. Now, after 26 years without seeing anything from the Magic Realm, that’s all she sees. Everywhere she turns, there is someone trying to kidnap her. She has no idea what the Necromancer wants with her, but she’s determined to find out.

Terak is a Gargoyle. (duh) Not many people know about Gargoyles- and that’s the way he wants to keep it. Then, he gets a message from The Oracle saying he needs to protect a human. What starts off as a duty and annoyance turns into something more once he gets to know her. Now he will destroy anything and anyone who tries to take what’s his. *eyebrow wiggle*

Larissa needs to learn about all these creatures she had been sheltered from- and fast- because they are coming for her.

I’ve been trying to find another awesome gargoyle themed book after reading In Stone by Louise Gornall and I’m happy to say I found another one! This book had me hooked from page one. It starts off focused on Larissa’s dad when The Collision happens. Could you imagine colliding with another realm? The human realm defiantly wasn’t expecting it and a lot of people lost their lives. Now 26 years later Larissa lives in a city that is creature free…or so she thinks. She’s been sheltered by her dad and brothers and doesn’t know anything other than where she lives. I don’t know about her, but I would have been reading up on all the supernatural beings. I don’t like being in the dark. Anyways this book was very interesting and very good. It has something for everybody Zombies, Dragon Slayers, Mages, Necromancers, Gargoyles and so. much. more. There are also a lot of secrets being kept in the book. You just think you know someone and then BAM- the secret is out of the bag. This world is truly amazing! I was going to put some quotes after my review but I read the book so fast that I didn't get any. I finished this book in a couple of hours- like.. I literally couldn't put it down. The romance in the book was….not rushed but they could have gotten to know each other a bit more. And I was hoping to get more insight on a certain book about gargoyles. *wink* We only get a little tease in this book but I’m hoping for a lot more in the next one. *blushes* Is it getting hot in here? LOL Gosh the scenes in this book had me giggling like a little school girl. I NEED MORE!!!!!! 2014 needs to hurry on up because I don’t think I can wait that long for the next book. I know the next one is going to blow this one out of the water. MEEP

Larissa: is just and ordinary school teacher before a horde of Zombies tried to take a bite out of her. Now she is flying around with gargoyles and in epic battle scenes. Some would say it’s too much for a sheltered girl to handle- but not Larissa. She keeps her back straight and her head held high. It’s her way or the highway. She does get into a lot of trouble because of that though. She knows that the necromancer wants her for some reason…and is determined to discover why.

Terak: Is the Clan Leader of the Gargoyles and wants nothing but the best for them, even if he has to watch a poor human. At first, he is hard as stone and then he finally starts to open up to Larissa. He is ALL ALPHA! He can be unbearable at some times, but it’s always for the best. LOL He also likes to get his way and he and Larissa clash heads a bit.

Fallon: She is one cool chick. She has a major bada** sword and is not afraid to use it. Most of the book though she is…how do I say this a nice way……she was very temperamental. Yeah let’s go with that. She doesn't like anyone and doesn't trust anyone. I would watch my back around her but if you thought she was going to kill you, you’d already be dead. That’s how awesome she is. 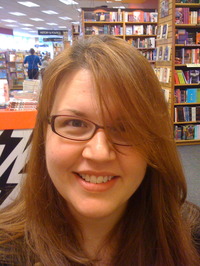 Born to the pothole ridden streets of Pittsburgh, PA, Danielle started writing in a time long ago, a time when there were not enough vampire stories to read and she had to write her own to fill the void. Yes, such a time of darkness did indeed exist.

Danielle writes stories full of fantastical goodness and plenty of action, but always with lots of romance (and a bit of woo-hoo!) mixed in. Vampires and Werewolves and Demons and Angels, Sword & Sorcery, Fairy Tales, Updated Mythologies and the like - if it's out of the ordinary, it's fair game for her stories.

When not writing, Danielle reads comic books and watches cartoons (though she says she reads manga and watches anime, because saying it in a different language makes all the difference.) She listens to music, plays D&D, follows XKCD, watches movies with the Rifftrax on, and is mom to two amazing little girls and wife to her favorite guy in the world.

She is also the host of Romantic Geek Girl, a Podcast & Blog dedicated to those two great tastes that taste great together - Geekness and Romance.