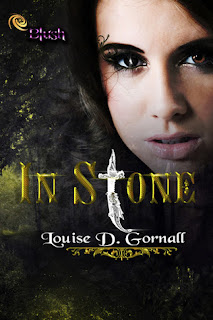 
Beau Bailey is suffering from a post-break-up meltdown when she
happens across a knife in her local park and takes it home. Less than a week later, the new boy in school has her trapped in an alley; he’s sprouted horns and is going to kill Beau unless she hands over the knife.

Until Eighteenth-century gargoyle, Jack, shows up to save her.

Jack has woken from a century-long slumber to tell Beau that she’s unwittingly been drafted into a power struggle between two
immortal races: Demons and Gargoyles. The knife is the only one in existence capable of killing immortals and they’ll tear the world apart to get it back. To draw the warring immortals away from her home, Beau goes with Jack in search of the mind-bending realm known as the Underworld, a place where they’ll hopefully be able to destroy the knife and prevent all hell from breaking loose. That is, provided they can outrun the demons chasing them.

All it took was Beau witnessing one guy turn to dust, then taking the knife that killed him to turn her life upside down. Now she must try and destroy the knife with the help of newcomer Jack- who just happens to be a gargoyle. If they don’t destroy the knife, demons will try to retrieve the knife and take over the world. Beau just wants to get rid of it and for everything to return to normal, but Jack needs her help because anyone that touches the knife changes..... into power hungry monsters. But Beau is the only one it doesn't change…..or does it?

They are in a race against time to destroy the knife amidst the threat of Demons that will stop at nothing to retrieve it.

How do I even begin to start this review? Let’s just say that this book was fan flipping tastic! Never heard of this book?….well now you have and you seriously need to look it up. It has Demons, it has half-demons, and it has Gargoyles…..I mean what more could you want? This is my first book that I've read about gargoyles, and now I can’t wait to read more. If there are other gargoyle books out there like this one, sign me up quick! This book was an epic adventure!!!!!! The book started off with a bang and ended with a bang and leaves you wanting the next book... like yesterday. Beau is just a mortal with a semi ordinary life, but within a matter of days all the changes. How would you react? Well she gets depressed and then she gets angry, Why her? She keeps asking herself that question during the whole book….well she doesn’t say it exactly but it is implied. It does finally say why it had to be her and let me tell you,  I never saw that coming. I mean OMG!!!!!! Anyways,  I laughed and cried most of the book, but mostly laughed. Beau is crazy and I love it. The book wouldn’t have been the same without her. Oh, there are some things that go on in the book that should get you interested. How about Hell? Purgatory? Learning about the gargoyles and the knife? That was some pretty serious stuff. I was just mesmerized by all of it. I didn't want this book to end and I only stopped to go the bathroom and get a little snack. This book will have you in its clutching from the first word. This book has already earned a spot in my top reads of the year. ^_^

Overall: YOU NEED THIS BOOK IN YOUR LIFE!!!! What are you waiting for, go get it. :D

Beau: She is slightly perverted and I love it. She had me laughing on several occasions and had me crying for her during others. We see two different sides of her in this book and both of them are fascinating. One minute she is sweet, and the next you better watch your back.

Jack: At first he is a little mysterious, but then he opens up to Beau and I was shocked he did. We find out how he became a gargoyle and why. Like I said, shocking stuff. He is very protective of Beau….but is it out of friendship or more? ;) We also get to see different side of him. It’s like I’ve slowly fallen for him, but I’m still cautious because he is so unpredictable. I just need the next book to find out what’s going to happen.

So what do you think, sound like your kind of book? I’d love to hear your thoughts in the comment section below. :D

And if by some means I still haven’t convinced you (COME ON MAN) to read the book. Here is an excerpt from the book!!!!

“Straight away I was drawn in by the story and Louise's fantastic writing style, and I really struggled to put it down.”

“If a story can have me so invested that it brings out those kind of emotions in me - whether happy or sad - then I know I've found another to add to my favourites, and In Stone was one of those books.”

“The plot was perfectly executed and delivers a thrilling ride filled with adventure, trails and an unexpected end.” 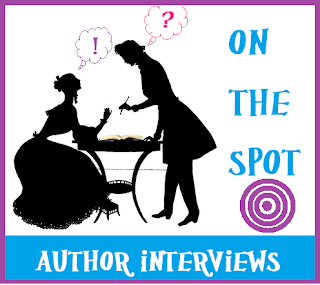 1. If you could describe your book using three words, what would they be?

2. What sparked the idea for your novel?

There were a few things that kind of mixed in my mind to form an In Stone-story-stew. There was this quote by Nietzsche that goes a little something like this:

"Whoever fights with monsters should see to it that he does not become a monster in the process. And if you gaze for long into an abyss, the abyss gazes also into you.”

Then there was the plot of Lord of the Rings, and I also saw this conversation unfold on Twitter about the invincibility of immortals.

3. Do you have a favorite character from In Stone? If so, can you tell me who it is?

Jack is my favorite! He's just so suave and sarcastic...although he is at his most brilliant when he's bouncing off of Beau.

4. Did you have to do any research while writing In Stone?

There was a lot of looking at pictures to scout for locations, and I read a few articles on the gargoyles frightening away demons myth. It was interesting stuff, but this story kind of had a mind of its own. I'm not great at sticking to outlines and I didn't want to get too bogged down in facts.

5. I’ve always wanted to ask an author about their cover. So, did you have any say in the cover and do you think it portrays what’s in the book?

Entranced asked me if I had any ideas. I suggested that the cover show something that I hadn't mentioned in the blurb...something that's going on with Beau (you know the thing I'm talking about ;)) And the designer, Suzannah, got it spot on. I was stoked when I saw it!

6. Do you have any other books planned for the future?

I'm writing the In Stone sequel as we speak, and I've written a YA horror which I'm hoping to find a home for before the year is out!

7. So on Goodreads it doesn’t say if In Stone is going to be a series. Is it?

It is! There is a sequel underway. I feel like Beau's story isn't over just yet...

8. What are your goals in regards to your writing?

To be honest with you my goal was to be published. Everything that happens now is just icing on an already pretty sweet cake!

9. Was there a certain author or book that influenced you into writing?

The person that talked me into writing was actually my twin sister, Rachael! She's always been a huge reader, bigger than me. I was dabbling in screenwriting, getting nowhere, and she was all like you should give writing novels a go. And here we are!

10. What was the hardest part of writing your book?

Getting the voice right was tough. When I first wrote Beau she had this hyperbolic, lyrical dialect. I was trying to be smart, but when I started revising I just wanted to punch her in the face. The second I stopped trying to force it was the second I realized who she was and where she was coming from.

11. While you were writing, did you ever feel as if you were one of the characters?

I relate to Beau a lot. She picked up my dry sense of humor during drafting. I was also a wannabe goth in my teens...and I guess, I want to make out with Jack!

I put chocolate on most of the things I eat...even savory things.

Lord of the Rings.

Vampire or werewolf? Or any other supernatural creature

I'm team Edward. But my favorite supernatural creature has got to be my very own gargoyle, Jack!

I would like to end the interview with something fun. Can you tell me something fun/random/wonky/crazy about yourself or your writing habits?

I'm generally pretty wonky. What can I tell you....Erm...my least favorite word in the world is moist. I wanted to be a fighter pilot when I was growing up, and last year my summer was so painfully boring that I learnt how to roll a two pence piece across my knuckles.


Thanks so much for taking the time to answer my questions!!! ^_^

Thank you so much for having me. This has been great fun <3 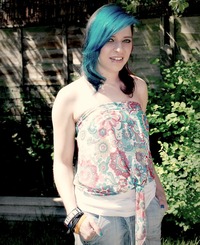 How can you not want to read this book now. Enter below to get a chance to read it as well as some other goodies. :D This Giveaway is only open to the US, UK, Australia, and Canada