On the Spot Interview with Ana Fawkes [Adult Romance]

1) Are you excited to be venturing out of your popular Erotica series and exploring the world of writing Contemporary? Nervous?

2) Can you describe your newest novel, Almost taken, in 15 words or less?

AF: Can two people conquer fear and lies to fall in love?

3) What was your favorite part about writing Almost Taken?

AF: Creating the connection between Jared and Becky.

4) What was your least favorite part?

AF: Having them get so close to being together and having something happen to prevent it!

5) Who was your favorite character to write about in the novel? Why?

AF: I love writing Jared because he's such a dreamy guy. He's almost perfect and he has such a big heart... which sometimes gets him into trouble.

6) The title seems like it accurately portrays the subject matter in the book. It is, in fact, a cute title. If you were writing a book about your own life and experiences, what would you title it?

AF: About my life? Let me think... The Road Left Broken

7) It seems like the characters in this series are going to have to go through some trials to get their happy endings. Do you get extremely attached to your characters?

AF: I sometimes do. When writing By His Command, since it was 10 books, I got attached to Jonathan and Isabella. I hated to say goodbye. With Almost Taken, I really got attached to Jared and Becky. I was rooting for them, loving the story as it came to life.

8) If so, how do you react when you have to write a scene that is going to be particularly hard on them?

AF: I just put myself with them and then imagine to be in their shoes. Life isn't always happy or fair but it's the hard moments that make us stronger.

9) What sparked the idea for your newest series: Two Weddings, One Funeral, & One Baby?

AF: I wanted a fun, contemporary series. I wanted the plots to kind of go together with one book leading to the next. And I wanted an obvious, funny title!

10) The cover is beautiful. Did you have any say in the cover and do you think it accurately portrays the content of the book?

AF: I gave my thoughts and suggestions. I'm very happy with the cover too!

11) I would like to end the interview with something fun. Can you tell me something fun/random/wonky/crazy about yourself or your writing habits?

AF: I always have a silly routine. I have fresh coffee. I look out the window. I keep the curtain open if it's nice out (lol). I set my laptop up the same way and I always read what I wrote the day before to inspire me. It's my routine and I like it! :)

More about Ana and her books

From the bestselling author of By His Command comes a romance series that explores life, love, marriage, and death. 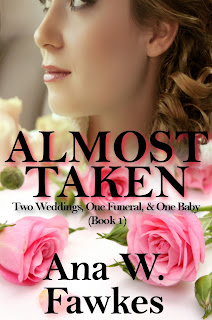 Jared Crowly was supposed to sell the apartment to the rich, powerful Harry Pitt and his beautiful girlfriend, Becky... not fall in love with Becky.

When Harry shows up to the apartment again, this time with a different woman donning an engagement ring, Jared is thrown into a world of deceit, and Harry threatens to tarnish Jared's successful career. Jared battles his emotions on what to do next, which only gets more complicated when he's invited to be in the wedding party of a close friend whose fiancee has asked Becky to be a bridesmaid.

Secrets will be bared and hearts will be broken, but can a new love overcome it all?

Jack and Riley really aren't engaged... or so Jack thinks. When Riley's competitive family puts her on the spot about the 'wedding', she begs Jack to help her. But what starts as a pretend fling soon becomes real. When hands touch, eyes meet, and hearts melt, anything can happen... even making fantasy a reality...