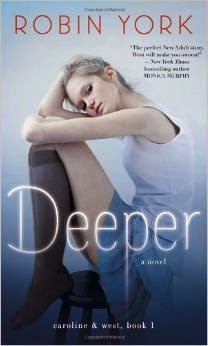 When Caroline Piasecki’s ex-boyfriend posts their sex pictures on the Internet, it destroys her reputation as a nice college girl. Suddenly her once-promising future doesn’t look so bright. Caroline tries to make the pictures disappear, hoping time will bury her shame. Then a guy she barely knows rises to her defense and punches her ex to the ground.

West Leavitt is the last person Caroline needs in her life. Everyone knows he’s shady. Still, Caroline is drawn to his confidence and swagger—even after promising her dad she’ll keep her distance. On late, sleepless nights, Caroline starts wandering into the bakery where West works.

They hang out, they talk, they listen. Though Caroline and West tell each other they’re “just friends,” their feelings intensify until it becomes impossible to pretend. The more complicated her relationship with West gets, the harder Caroline has to struggle to discover what she wants for herself—and the easier it becomes to find the courage she needs to fight back against the people who would judge her.

When all seems lost, sometimes the only place to go is deeper.

This book was amazing, you guys! If you love New Adult contemporaries, then you absolutely have to read this book. It was simply original and the characters were very well fleshed out. For me, it was definitely on par with Easy by Tamara Weber and Pushing the Limits by Katie McGrary, both of which are two of my top favorite reads ever. The only difference being that the guys in those two books are so sweet and *sigh*. Sorry. I’m heading back into old book boyfriends. Noah & Lucas <3. Anyways! West, on the other hand, can be sort of a complete dick on occasion. But you know what? It was not ignored. It was directly addressed and I LOVED it. YES for female characters who call out men who are being Neanderthals. YES for male characters who are flawed, recognize and correct themselves. (West was completely loveable by the way. I mean he had his moments, but he was coming from a good place.)

The writing was absolutely beautiful and poetic. It did not feel like a debut. It felt like that writing of an author whose books you buy automatically without even knowing the blurb- because you KNOW the writing will be beautiful and the characters will be unique and interesting and deliciously FLAWED.

The relationship development was great. The book takes place over a period of time (I cannot go into details right now.  Just know it is more than four months at least.) I love that. I love that the characters had time to develop their friendship (non.. friendship?) and relationship over time. Insta- love is for punks. insta- attraction, however.. I am way on board for the instant attraction between these two. This is definitely not a young adult book. 18+ all the way and let me tell you this book was HOT. Those sexy scenes are frequent, but not erotica. There is romance and emotion mixed in with the sexy and it just heats the pages up. That West sure knows his stuff. ;)

Long story short: The characters were awesome and original. I loved Caroline and her struggle for control of her life and West’s struggle for what he wants in his life. These characters and their struggles took control of my life. The storyline was unique with plenty of angst to keep the readers engaged and the romance was hot and steamy.

I can understand a longer book to get some stuff settled. But I don’t see how this can be made into a whole second book. So long as it isn't a trilogy, I guess there wont be TOO MUCH drama. Duologies work just fine. So do longer stand- alone novels. Meh, that is just my opinion. I hope the second one does not get ridiculous just to drag it out like I have seen some series do.