[Review] Save Yourself by Kelly Braffet 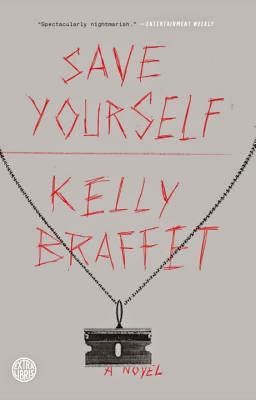 Patrick Cusimano’s father killed a boy while driving drunk. Now Patrick is working at a grubby convenience store, and he and his brother Mike are the town pariahs. Caro, Mike’s girlfriend, is running from her own painful past, with no idea what she’s running toward. Layla Elshere is a goth teenager who befriends Patrick for reasons he doesn’t understand and doesn’t trust. And Layla’s little sister Verna, tortured by her classmates, finds unlikely solace with Layla’s dark tribe of outcasts.

As their fates become entwined, everyone is set down a terrifying and twisted path—leading them all toward a collision where loyalties will be betrayed, fears exposed, and lives shattered.

I have conflicting emotions about this book.
I thought that is was interesting as a suspense novel with some horror themes. There were some dark themes touched on in relation to teenagers and the stress and decisions they face. I just had trouble actually liking some of the characters. Which I hate, since, how am I supposed to care about the story if I just can't like the characters.

I did not like Patrick. I did a bit in the beginning. I felt bad for him and was looking forward to his story. But as the book went on, he was a selfish jerk who didn't care about anyone besides himself, but he actually believed he was caring. It was.. angering.

I also tried to like Caro in the beginning. I also felt a bit of pity for her. But she threw that pity away through various actions. I would have felt differently if she had actually cared about Mike. These two characters just felt selfish and I had a hard time liking them or their relationship. I think I continued reading just hoping they would NOT get a happy ending. Because I'm sadistic like that.

I did love/hate Layla. She did earn my pity and forgiveness, even if she was completely jacked up. While she did not so savory things and was not the best person all around, she still had dynamics in her personality that let a better person shine through on occasion and gave me a glimpse at who she could be. (unlike Patrick and Cara who just ticked me off.)

One character I did love was Verna. She was my favorite and I found it extremely difficult to dislike her. While the other characters were trying their hardest to destroy their lives, she is trying her best to pick up what is left of hers. She gets into horrible situations, but she  always wants to do what is right, especially when it comes to her sister.

I very much liked the end of the book when it comes to Verna, Layla, and all the other characters, excluding Patrick and Cara.

I was very upset that nothing was addressed about Mike in the end. The author just decided he did not deserve to have an ending, I guess. Like the guy didn't have to go through enough drama, now he does not even rate an update in the ending? I do not approve.

**I received this book in exchange for an honest review