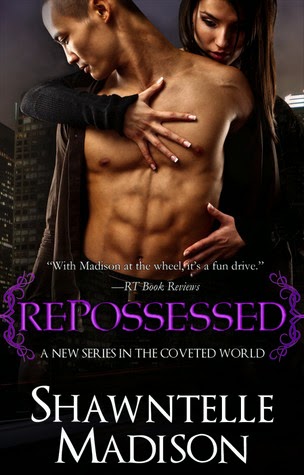 Supernatural matchmaker Tessa Dandridge knows a little mist here and a little magic there will help reckless werewolves and precocious pixies find love. That is, until her magical Smythe scroll is lost in her repo’ed car and she can’t contact her V.I.P. clients. To connect with an important client cavorting in the fifth dimension, Tessa must depend on handsome Rob Shin, a warlock repo man, to enter Limbo and find her Smythe scroll.

Rob has money problems of his own, thanks to the bank determined to foreclose on his elderly aunt and uncle’s home. Repossessing magic wands and cursed pianos from disgruntled warlocks isn’t the best pay, but the Navy SEAL works well as a repo man to pay off his family’s debts. Rob’s repossession jobs catch up with him when a powerful warlock seeks to end his life for his constant meddling, drawing Tessa in the middle.


Shawntelle Madison has done it again!!!!! She never seems to disappoint and if I see her name on anything I’m going to read it without even reading about it. Repossessed is set in the same world as the coveted series Mrs. Madison brings us Tessa who is a witch matchmaker and Rob a Navy Seal on medical leave who is doing repo work to get his family out of debt.

In the first pages of the book Mrs. Madison said that she actually wrote this story before the coveted series. I’m just glad she is writing lol Like her other books this one delivers. It has a sexy Asian who is honorable and a water witch that seems to think that she isn’t attracted to Rob. This book holds a lot of magic and mayhem! Beware to those that are faint at heart because there are a lot of breathless moments between Tessa and Rob. This book just like the others is full of dire circumstances and lots of close calls. I don’t think I was bored during the whole thing. It’s set in the same world as the coveted series, but we get to see a whole new scenes and powers, and new creatures!

So Tessa is a supernatural matchmaker and like probably most of us has money problems. The thing is she has a scroll that helps her contact very important clients. Unfortunately she is behind on her car payments and the scroll just happens to be inside her car. Why is this bad? Well is gets reposed by Rob and he puts it in some kind of limbo that can only be opened with something is being reposed. The good news, Tessa manages to work along side him and try to get her scroll back, but there is always a catch. The less important items, the less the hole stays open and the bigger the item the longer Tessa has to look for her car. She thinks that it’s going to be east and danger free, she thought wrong. Someone is not happen with Rob and the item he took from him and he wants revenge. How do you stop someone you can’t even find? Well he comes to you of course. Tessa gets into more than she can handle, but will it be worth it in the end? Will Tessa find the scroll in time for the match dinner? Will Tessa finally meet her match? You will fond out all that and more in this new urban fantasy by Shawntelle Madison.

Overall: New characters, new powers, and new creatures. Shawntelle Madison knows how to tell an awesome story and I can’t wait for more Tessa and Rob. Shawntelle Madison is a web developer who loves to weave words as well as code. She’d never admit it, but if asked she’d say she covets and collects source code. After losing her first summer job detassling corn, Shawntelle performed various jobs—from fast-food clerk to grunt programmer to university webmaster. Writing eccentric characters is her most favorite job of them all. On any particular day when she’s not surgically attached to her computer, she can be found watching cheesy horror movies or the latest action-packed anime. She lives in Missouri with her husband and children.