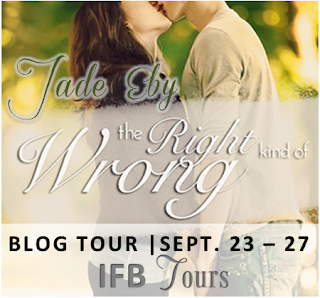 The Right Kind of Wrong 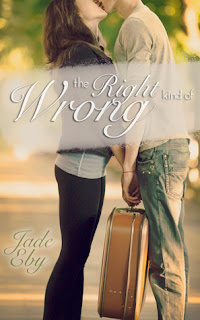 Kara Pierce has held onto the same dream since she was a little girl: to be the next Katie Couric.
Vince Gage, a budding filmmaker whose I-don't-give-a-shit attitude cancels out his charm, almost ruined it for her once, and now he’s back, threatening to do it again.
When the two of them are paired together for a college competition with a $20,000 prize, the only thing they agree on is winning.

They return to Iowa where Kara grew up to research her grandfather's service in World War II, instead they find themselves in the middle of a family scandal kept quiet for far too long. As Kara and Vince investigate the scandal deeper, they realize the price of uncovering the truth is so much more than they bargained for. 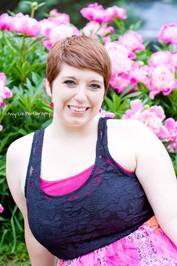 Once upon a time there was a little girl who fell in love with books then she grew up to write her own.
Jade has participated in National Novel Writing Month (NaNoWriMo) six times and enjoys copious amounts of coffee. When she's not writing, she enjoys trashy reality T.V. and reading everything she can get her hands on.
Mommy to two dogs and two naughty kitties, she feels like she might be on her way to having a zoo.

While I've always been a writer of sort, I've also been a serious reader my entire life. My love of writing was developed through my love of literature and there have been so many novels that have touched my life and made me want to be a better writer.

#1 The Fault in Our Stars by John Green: This book is no doubt the favorite of many readers. For me, I've been a fan of John Green and the Nerdfighters for a long time and I wasn't sure if he could write anything that topped Looking for Alaska, but then TFiOS came out and my life changed. Everything in the novel far surpassed my expectations and I wondered how it was possible for someone to write something so amazing. His characters, the writing, the emotion! It was all done so superbly that I've read the book over and over again. If there was one author I aspire to be like -- it's John Green. Not only are his books amazing, but as an author, he is humble and smart and does amazing things with his fame. He's helped so many kids understand that it's okay to be a little different or a little weird. He celebrates difference and acceptance and for that -- I think the world of him and his novels.

#2 Gone with the Wind by Margaret Mitchell: I read Gone with the Wind when I was very young. I think I was at first enticed by the length (I was a bit of an overachiever) and the fact that my grandma loved it. But once I started it, I fell head over heels with the novel. It started my love affair with novels set in the south. But more than anything, it taught me what it means to write a novel that surpasses time, generations and fads. I think Gone with the Wind has the original "bad boy" of literature and I'll tell you -- Rhett Butler is one of my favorite book boyfriends of all time.

#3 Harry Potter Series by J.K. Rowling: I don't think any "favorites" list is complete without Harry Potter. I'm lumping the entire series in one because in my mind there just isn't any separating them. They come as a package. My love for Harry Potter runs so deeply, it's hard to explain what it means to me. I grew up with Harry and the crew and I remember toward the end of the books, I would wait in lines for the midnight releases of the books (and the movies). Harry Potter taught me how to believe in things even when the outside world and parents were saying "that's not real!" J.K. Rowling is another author I respect so much. She's humble and appreciative of every bit of success she deserves.

#4 The Homecoming of Samuel Lake by Jenny Wingfield: This novel was a sleeper hit for me. I picked it up because it was set in the south and the blurb immediately caught my attention. About five pages in, I fell in love with this novel. It has SO much charm and love in it. It's one of those novels that you read and then immediately want to pick it up and read it again. You really *think* about the message of love, family and forgiveness after reading it and I just think it's incredible how the author was able to take really tough situations and add a bit of comic relief to some parts. I often refer to this book as our generations "To Kill a Mockingbird" in a way. This is a book that doesn't get nearly the attention it should!

#5 The Night Circus by Erin Morgenstern: I absolutely could not believe this was the author's first book. The imagery and the language of the novel is reminiscent of a writer who has studied and honed their craft to perfection. To say I loved this novel is an understatement. I would find myself reading and rereading the book because certain lines just rolled off the tongue so beautifully, so eloquently they deserve to be savored over and over again.

#6 Hunger Games by Suzanne Collins: This is another one that goes without saying. I actually read this book before the craze hit and I remember telling my husband "This is a book that will hit it big. It will be on the level of Harry Potter and Twilight" and I'm so happy I was right because this book and the author deserve every bit of the attention. I love that at the time it seemed SO different from every other YA novel I was reading. And it brought about one of my favorite categories of books to read in -- Dystopian!

#7 Looking for Alaska by John Green: As I mentioned earlier, my love for John Green knows no bounds and Looking for Alaska deserves it's spot on this list because I absolutely identified and felt a kinship to the characters in it. I devoured this book and it's another one I've read over and over again. There's just SO much about this book that spoke to me but I think the general "trying to find who you are and where you fit in" is one that I especially felt touched me. I read it at a time in my life where I was trying to discover who I was as young woman and what I wanted from my life.

#8 On the Island by Tracey Garvis-Graves: I truly believe that sometimes a book becomes a favorite not only because of the way the book made you feel, but because of the way an author made you feel. Such is the case with On the Island. Tracey is from my state (Go Iowa!) and she is just the most down-to-earth, humble piece of beautiful pie I've ever met. She's honest and she's fricken funny. I followed her blog long before she published and it was amazing to follow her journey from writing the book to publishing it. But more so -- the book is flipping amazing! She took a book theme that hadn't been done in a while, turned it on it's head and made the most compelling love story I've read in a while. I love this book!!

#9 The Help by Kathryn Stockett: This book was AMAZING. There really are no other words. Yet, another book set in the south, I loved the way the author took on an inside look at slaves and society. It was sad, funny, hopeful and beautiful. I was able to see the author in person at a book signing and she was adorable and funny and I can't wait to read whatever she puts out next.

#10 Ashfall by Mike Mullin: Another post-apocalyptic/dystopian on the list! Yay! I read and adored Ashfall so much. Not only is the author amazing (noticing a trend with amazing authors...right?) but Ashfall is set in Iowa, where I live. So throughout the entire novel, I know every place the characters are talking about or discovering. I love how *real* this book feels. Although, that's scary because what if Yellowstone erupted and wiped out half of humanity? What if we all acted liked savages and had to kill to survive? It's extremely terrifying and scary to think about but I think that's what makes this novel so great. He doesn't stray away from the gritty or the dark and that makes it a tough but rewarding read.


Whew. That's a lot of amazing books! Now, I feel like I need to go back and reread them all again! Thank for featuring me on your blog and allowing me to share the books that I love and have influenced me as a reader and writer.