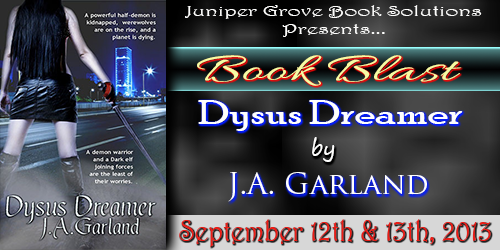 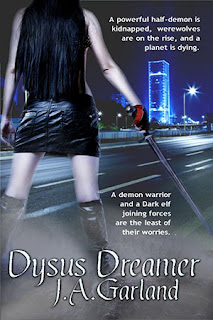 Demon warrior, Slade Aesus, is determined to destroy the werewolves controlling his cousin. But a beautiful elf, consumed by her own vengeance, finds the wolves first. Botching her assassination attempt, Annwyn has the most powerful Packs in the world biting at her heels.  Both fiercely independent, can the two join forces long enough to fulfill their missions and stay alive?

A solid assassination operation takes one part opportunity, two parts discipline, and three parts disposition. Having two out of three this chilly Seattle evening, Slade considered himself in abundance of good fortune.
Parked in front of a solitary office building, in the zone clearly marked “No Parking,” Slade cleared his mind of distractions consisting of the little here and there that could creep in and throw him off, just a hair, but enough to jeopardize his mission. Satisfied, he slid out of the rental car and re-tucked a stylish black golf shirt monogrammed with “Constantine Vineyards” into a pair of crisp, steel gray slacks. In this particular scenario, image was crucial.
Tonight, the element discipline presented itself by his waiting for the precise moment to strike. He made a living analyzing people and their habits, so he knew his targets relaxed around the holidays and were less likely to see the danger lurking behind his smiling façade. The current festivity du jour was Christmas, and coupled with his gift, destined Slade a popular man. I'm counting on it.
He moved around to the trunk, where he heaved free a slatted, wooden case. It smelled of musky oak. The peaceful scent hinted at candlelit dinners shared with a long time lover. His jaw clenched. Not in my past and not in my future.
Slade lugged his precious cargo toward the sprawling metal office building. Immense, the structure stabbed farther into the heavens than any other in the area, yet fell short. Just like my target. Outwardly, Joe Larsen appeared a dedicated family man, a real pillar of the community whose flourishing internet and telecommunications business, ProCom, employed hundreds. In reality, the werewolf belonged to the Dirty Dozen, a group of the twelve most ruthless wolf Packs roaming the earth.
How ironic. I was once your target. A year ago, the Dozen kidnapped his cousin Amber, a half-demon, half-human. Able to keep a shifter from shifting, Amber's ability proved irresistible, since more times than not, the Dozen's meetings devolved into an unproductive, fur-flying brawl. We saved Amber, but left behind some unfinished business. Starting with Larsen, the wolves would learn a lesson...a demon’s memory rivals the most scorned woman, and paybacks were indeed a bitch.

Writing under the pen name, J.A. Garland, Jennifer is a full time firefighter in the state of California, an addicted trail runner, a connoisseur of all things cheese puff, and a urban fantasy author. When she isn't slogging through the obstacles at a mud run, you can find her hunched over her computer unleashing demons, vampires, and werewolves upon the world.

Giveaway Details:
This is an international tour wide giveaway. Up for grabs is a $50 Amazon Gift Card!