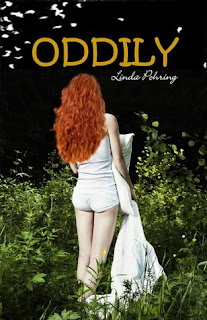 There are three things the shy, awkward Oddily knows for sure.

She would rather be anyone other than herself…
She wants to fit in at school…
And strange things are happening to her.

For Oddily, she tries to keep an open mind…
But what she discovers is too unbelievable to think about…
Too magical too consider, and too dangerous to ignore.

Oddily becomes trapped in a love story like no other.

Oddily has been from foster home to foster until she ends up with one family that actually keeps her. The only bad thing is that they have a daughter, Starla, who makes it her life’s mission to hurt Oddily. Oddily takes it all with silence. That is until Maxim shows up. He is strange, smart, and beautiful-everything Oddily know she can’t have. Or can she. Maybe he will be the one to get Oddily out of her shell. But nothing is that simple when Maxim is hiding a secret. Will he tell Oddily or will he walk away?

I don’t know whether to give this book a 2.5 or a 3. I liked it well enough. I thought this book was going to be awesome because I’ve been dying to read it since I read an excerpt. I probably didn’t like it much because Oddily was always putting herself down and not standing up for herself. The writing itself was alright, but there was certain times when I thought about not finishing the book. The reason I did finish was because I wanted to know what happens. Also, everything didn’t feel believable to me. I mean a whole school is not going to be after one girl, am I right. And the deal with the sister and brother...well I feel like the author just put that in there to give the book some flare.

Overall, I liked it, but it was severely lacking in certain areas. I would recommend that you check this out at the library before you buy it.

Oddily- I don’t know whether to feel sorry for her or to berate her. During the entire book, she let’s people run over her. She is always telling herself she is ugly because that’s what she's always been told. Frankly, I just got tired of it all. She was just so gullible and leaning towards stupid. I mean really. All these people hurt her and yet she trusts them and always falls for there tricks. SIGH

Starla- She made me sick to my core. THAT IS ALL.

Maxim- He was too good to be true. Yes, he is a nice guy and there is nothing wrong with him, but that’s the problem. He was flawless. At least give me a crocked tooth or something. The only thing I can probably tell you about him is that he obsessed with protecting Oddily.

Nexa- She was by far my favorite character in the book and we hardly get to see her. She was the only one with sense and she was pretty bad A**. LOL