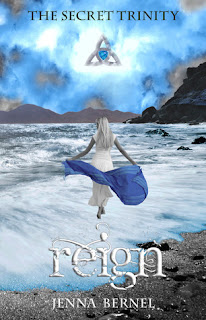 Title:The Secret Trinity:Reign
Series: Fae-Witch Trilogy #3
Author: Jenna Bernel
Genre: New Adult Fiction, Paranormal Romance, Supernatural Fiction
Release Date: September 28, 2012
Source: Tour Host {iLuvTours Book Tours}
For Aria Darwin, playing with fire has become a way of life, not because her powers have finally been unearthed, but because she’s drawn to the dormant light sparking behind Clay’s eyes. With every move towards that light, she risks her title as Queen. Even though she’s terrified of getting burned by the backdraft, Aria can’t seem to ignore the tempered blaze buried in her heart.

After a disturbing vision, Aria withholds a deadly secret in order to protect her Kingdom. Her people, her friends, not even Clay knows the truth as she makes peace with her destiny. Aria is looking to the future but the past keeps haunting her dreams, and she fears that the cost to defeat her enemy will be a much greater sacrifice than her soul.


Aria is tired of running and now it’s time to fight. She can’t stand back when the people that she cares about are in danger. She will kill Liam if it’s the last thing that she does. No ones else seems to agree with her so she has to do it by herself. That didn’t turn out to great and it backfires and she barely escapes with her life. Back in Draíochta and Aria will finally take charge and be queen while also trying to find out how to talk to Clay. He as been keeping secrets and she wants him to tell her before she outs him herself. And if Aria doesn’t kill Liam it could be the end of Draíochta and everyone that she loves. Things get eve more complicated in the final book of the Fae-Witch series.

It’s time for Aria to reign in her powers and take over.

This was the perfect ending to a perfect series. I loved every single one of these books and they kept getting better each time. This one is by far my favorite. Aria strikes out on her own only to end up caught and thankfully gets rescued by someone she thought was lost for good. She realizes that she does need the help of her friends and together they can overcome Liam. She knows how to harness her powers now, but there are still some surprises in store. We learn more about her friends and there powers. They are pretty great friends and would do anything for Aria. As per usual there are some tough decisions to make in this one and not all of the choices Arai chooses is the best. Also Liam is totally lost it. When Aria finds out what he is doing to become so powerful, she gets sick. I do too, how in the world you could do that I have no idea. It’s just wrong and that’s when Aria knows there is no help for him.  It’s kinda a hard to destroy him when ever one wants to do it a different way. Hopefully they’ll make a decision before it’s too late.

Aria- She is pretty awesome in this one. She uses her powers a lot more and there is a lot more action....with clay that is. J I love her determination and her ability to take on things she is not even ready for.

Clay- He is possibly the best secret keeper ever. He never even hits at what he is hiding, even though Aria already knows what it is. He is closed off, but that shortly ends at one point in the book. I just simply love him. 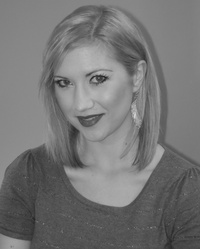 Author Bio: Jenna Bernel lives tucked along the bluffs, spending her days lost in the world of fantasy. When she’s not writing, she’s reading and drinks way to much caffeine to satisfy her love of both. Growing up she traveled extensively through the competitive dance circuit, unaware that at the time it would provide her future career an endless stream of inspiration for the captivating drama of Young Adult Fiction.
I enjoy all things travel, food and adventure.  While doing research for a trip to Ireland the idea for my book series, The Secret Trinity, came to life and would be the beginning of my greatest adventure yet.


Where to Find the Author