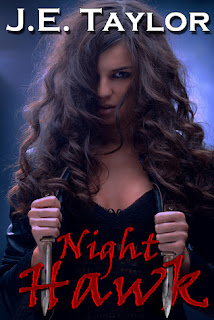 Selling your soul has never been so charming and Mark throws in a little something to sweeten the pot, his girlfriend Naomi.

Sentenced to death at the hands of a demon, Naomi Hawk has a firsthand lesson in despair and betrayal in Mark’s deal for fame with all the trimmings. Deep in the clutches of the underground brotherhood, Naomi's light is coveted for the Master's gain.

When she slips and falls eighty stories from a precarious ledge, Naomi resigns herself to the inevitable impact and death by shattered bones.

Before she can escape her demons in eternal slumber, something sinister plucks her from the plummet, stealing her out of the night to sacrifice her forever to the shadows.

I Received this from All Night Reads for my honest review.

Naomi has just been betrayed by her boyfriend. He turned her over to a demon to bring to Lucifer. Before the demon can take her, she falls off the building and is saved by Damian, who is a vampire. He turns her and she wants revenge. Not on him, but on her ex and Lucifer and she is going to need Damian’s help in order to do it.

This book starts off with a kick, but then slowly dies down. Then it turns in a bunch of sexual tension between Naomi and Damian. So, that’s basically the first half of the book. It starts to get interesting again when they finally leave Damian’s house. They get attacked by demons and you think Damian would kill them, but no Naomi does. The rest of the book she keeps saving a two thousand year old vampire and she is only three days old. What in the world is going on? He should be saving her. Anyway, I wish there was more revenge talk in the book. I mean that’s what Naomi wants. I really like the concept of the story and that’s why I’m giving it three stars. I’m pretty sure there is going to be another one and I have high hopes that it is going to be better than this one.

Overall: A good read that has some surprising elements that will keep you entertained till the end.

Naomi- I really didn’t get attached to her. I mean she is crying or gets hurt and yet I feel nothing. I wanted to connect with her more. I want her to knock Damian out and do what she wants for a change.

Damian- When we first meet him, he is scary and hot. That shortly goes out the window as the story moves on. He is always about to die and Naomi saves him. There is nothing wrong with Naomi saving him; I just want him to be able to hold his own…which he can’t. Not to mention he is emotional all the time (PMS anyone).

What do you think, does this sound like your kind of book?