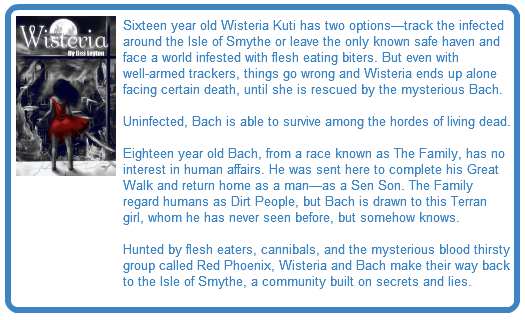 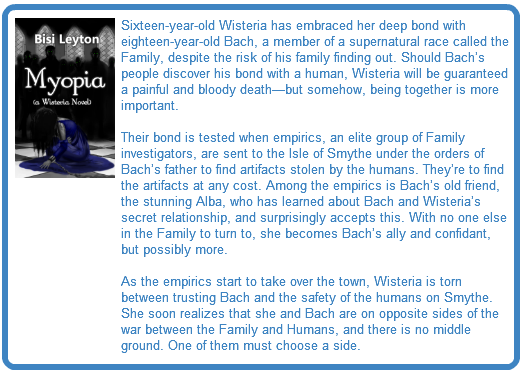 Review (Wisteria)
While I have only read a handful of real zombie books, I can immediately tell you that this is in a class all it's own. I have never heard of a story quite like this. It is amazing imagination on the author's part.
I actually enjoyed Wisteria as a character. You know how some characters in YA stories are typical and whiny like- well- teenagers. (: She was actually quite a pleasure to read about. I mean she was so likeable. May have had something to do with the fact that the THE POOR GIRL JUST COULD NOT CATCH A BREAK!. she is pretty much treated horribly and...and... she ends up having to be outside with the biters! But It's not all bad. i mean, she meets Bach. I still cannot decide how I stand with him. He is a complex character and i know he has his reasons for acting like he does. It's just... he could be a but much at times.  I just want to know what his intentions are towards my Wysteria! (ok, I sound like her grandmother.. weird). He got a little better but I am hoping he will improve more in the next book.

The zombies/ action? Some parts of the book had me turning page after page like a mad woman to find out what was happening next. The biters (um. LOVE that name. haha. because they... bite... haha. oh, you get it!)
I enjoyed the writing for the most part. I liked the zombies and the concept. It was a good book for a nice afternoon read. I may or may not read the second book. (:

Excerpt (Wisteria)
Wrapping her arms around herself, she moved away from him. Once again, humiliated and feeling foolish. “Goodnight, Bach!” She strode angrily to the side of the roof in order to climb down.

He grabbed her and held her back.

The guy came here just to tease her, yet again! Didn’t he know he was hurting her? Didn’t he care? “I’m tired of all this nonsense. I’m actually tired and need some sleep. I’m done with this. All of this!” She should’ve left the roof when she saw him appear. “Let go, so I can go.”

“Wisteria, it is not that.” Exhaling heavily, he released her. “My people could kill you if they knew I wanted you.”

This wasn’t at all what she’d expected him to say. “What?”

“I am in love with you. I do not know why, but I am. And it is selfish, because I just want you for myself.” Sadness filled his eyes as he spoke.

“Why would they do that to me?”

“Because you are human and because we see humans as Terran, or dirt people.”

“And you believe that too? So why are you here, living among us, if we’re so disgusting?”

“You are not disgusting. You are beautiful.” Rubbing his temples, he seemed troubled and bewildered. “But I chose Earth, because I came here as a child. Your people treated me so badly in the past. When I learned about the Nero disease, I wanted to see your world die.” He paused. “You were right when you said there was something wrong with me.

Giveaway
Bisi will award a $15 Amazon GC to one randomly drawn commenter during the tour. So visit all the stops on the tour and be sure to comment! I am the last stop, so If you want in on that action, I suggest you get crackin' (haha. release the Kracken!!) I repeat: this is the last day of the tour so get to commenting. The authors always appreciate feedback on the blurbs/synopsis..es. (oops).