{Review} Immortally Yours by Angie Fox 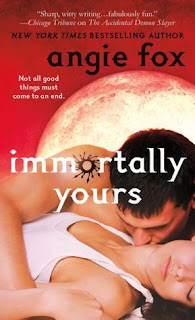 IN THE WAR BETWEEN THE GODS…

No one patches up the incoming wounded like Dr. Petra Robichaud. Recruited by the gods for her uncanny medical skills, she’s the best M*A*S*H surgeon in the army. Along with a nosy guard sphinx,vegetarian werewolf, and otherparanormal paramedics, she bandages soldiers who are built like Greek gods (literally). But when one sexy immortal ends up on her operating table—half dead and totally to-die-for—Petra’s afraid she’ll lose her patient and her heart…

NOTHING IS MORE DANGEROUS THAN LOVE

Commander Galen of Delphi is one gorgeous but stubborn demi-god. When his spirit tries to slip out of his fatally wounded body, Dr. Petra has to slip it back in—unwittingly revealing her ability to see ghosts. Now that Galen knows her secret, he’s convinced she’s part of an ancient prophecy. If the oracles are right, Petra could lead Galen’s army to peace. And if he seduces her on the way to hell and back? Heaven knows—all’s fair in love and war…

Dr. Petra is good at what she does and that’s why she was sent to the in-between to treat the immortals. She is used to everyday being boring and nothing really happening. That is, until commander Galen of Delphi arrives. He had been stabbed  and dies on the operating table. Petra is determined not to lose this hot God and shoves his soul back into his body.

After he recovers, Galen knows Petra is hiding something and he is determined to find out what it is. Even if he has to still a few kisses in order to do so, which he has no problem doing. When he finds out what she is hiding, he’ll do anything to use her  gift. Even if that means she has to die. Even if he has to lose his soul.

Is love worth it, if you know that you are going to lose it in the end?

The first few pages of the book I was saying "What the Hell?!" because the guy that they were describing was NOT the hot guy on the cover. THANK GOD, it wasn’t him. LOL That guy wishes he could compare to Galen. Ok, now that I've gotten that out of the way.. This book was amazing….you thought I was going to use awesome didn’t you. LOL I was hooked from the very beginning and couldn’t put it down. Petra was hilarious and witty at the same time. The story was pure action from the start. Things really got intense when Galen showed up. *MEOW* She knew that he was going to die, but she doesn’t want him to because she gets a glimpse of his soul. One of the funny aspects of the book was they were all trying to pull a prank on their boss. At the end of the book, the prank is EPIC. It has me dying laughing at two in the morning!!!!!! On the down side I guess you could say that you kind of knew what was going to happen. There were a few surprises that I enjoyed though. All in all, this entire book keep me captivated until the end.

Petra- She was not a kick butt heroine but she was compassionate and knew what she wanted. She was really dedicated to her work and took it seriously.

Galen- I really don’t know what to say about him. He would do anything to save everyone, even if he had to give his life. He is very loyal, but that could be because he is the son of the god of truth. Oh and he is such a tease and I’ll just leave that as that :D