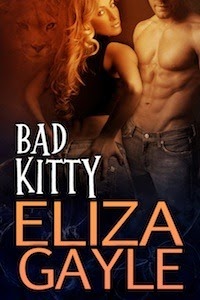 If you think you've lost everything. Think again.

Kitty lost her father, her home and her clan. Clinging to what's left of her pride, she's forced into the neutral zone, the supposed safe haven for half-breeds and outcasts. An attack forces her to the wrong side of the treaty line and into an even more dangerous situation. Determined to greet death with the last of her dignity, she is suddenly rescued by a tall, gorgeous...wolf???

As the next alpha leader of his pack, Rafe Comyn has more than enough to handle with pack politics and precarious treaties. The last thing he needs is a pissed off feline landing in his lap, especially when her scent triggers his overwhelming drive to mate. While the daughter of a former rival is quite a conquest, she's both forbidden and dangerous.

But as the heat of desire threatens to consume them, their differences escalate and Rafe must keep his own pack from killing the one woman he can't live without.

Bad Kitty is the first book that I’ve read by Eliza Gayle and I can’t wait to read more. The world she created is unique and very thought out. There are boundaries for the wolf and cougar clans. Then there is the neutral zone, where the half-breeds live and where the exiled live. And the Neutral zone is where Kitty finds herself exiled to. To bad she never steps in the front door of her new home.

Rafe finds the panther shifter just in time, not that he wants any involvement with her. She is half dead and his pack mates were about to take advantage. He just couldn’t stand back and let it happen. Now he has her at his house and he knows instantly that he is in trouble. He can’t seem to leave her side. To bad that the ones that found her want her back.

Struggles will ensue and the best man will end up the victor.

What happens to Kitty is messed up. I don’t know what kind of trouble she made before she was exiled but no one should go through what she did. She just wanted to be accepted from what I could tell and the other girl shifters were jealous of her beauty. Bad Kitty was a really fast paced book that doesn’t slow in the action department. Something was always happening and I loved watching it all unfold. Kitty is special and it doesn’t really come to light until the end of the book. I was like No. Way. It’s flipping cool and I can’t wait for the next one.

Kitty: Sure she is a little self centered but from what I’ve read I’m surprised she is still alive. I mean seriously. Some men would have cracked with what she had to go through. I can’t even imagine. She didn’t have any friends so she flaunts her beauty around dying for attention. And there are some people who don’t take kindly to her flirting with their men.

Rafe: He is an Alpha in training and doesn’t want anything to jeopardize that. So he is a little hesitant with his feelings towards Kitty…well because she is a panther shifter. He thinks the pack will not accept him as an alpha if he is with her, but can’t seem to stay away from her. Other than that I think he was a pretty great guy. Pretty swoon worthy. He knows how to handle himself. *wink*

Overall: A fast and enjoyable read that will leave you thirsting for more.

After growing up in the South and dividing my time between Florida and North Carolina, I decided that 2012 would be my year for change. I rented out my house on the East Coast and convinced my family to join me for a wacky trip across the country. Now I write my romance books from a small island in the Pacific Northwest while contemplating our next home renovation project on the fixer upper we bought.

When not writing, I'm likely to be found with my nose in a book or sitting in a darkened theater watching the latest blockbuster movie. Unless it's not raining, then I guarantee I'll be outside soaking up the sun or exploring one of the many nearby forests.

I love getting feedback so I look forward to any and all honest reviews as well as recommendations for good books. I am always on the hunt for a new favorite book.