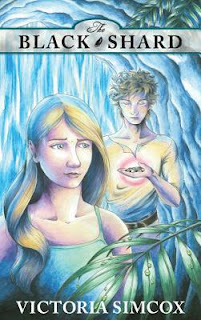 Kristina's stay at summer horse camp is horrible to say the least, and it's all because Hester and Davina are there as well, making her life miserable. When Hester's cruel prank goes terribly wrong, it's actually what sends the three girls back to the magical land of Bernovem. In Bernovem, Kristina is very excited to see her former friend, Prince Werrien. When he invites her to sail with him on his ship to his homeland Tezerel, putting it simply, Kristina can't refuse. Reunited with her gnome, dwarf, animal, fairy friends ... and best of all, Werrien, things seem like they couldn't get any better for Kristina. But when Werrien becomes fascinated with an unusual seeing stone, the "Black Shard," Kristina is haunted by a ghostlike old hag. Struggling against suspicion, guilt, illness, and ultimately the one who wants to possess her soul, Kristina will see it's in her weakest moment that she will encounter more strength than she has ever known. 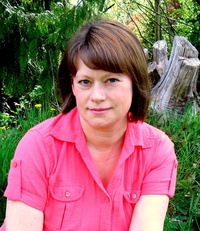 
Victoria, known as Vicki, was born in 1966, in Scarborough, Ontario, Canada, to an Austrian immigrant mother, and a Dutch immigrant father. She has one older sister, Jeannette. When Vicki was 7, she moved with her family to British Columbia. In her early twenties Vicki moved to Western Washington and now resides in Marysville WA. She has been married to her husband Russ, for nineteen years and they have three children; Toby, who is fifteen, Kristina, thirteen, and William, eight. She has home schooled her children for the past nine years, and she also teaches elementary school art. Vicki’s other family members are, a Chihuahua, named Pipsy, two cats, Frodo, and Fritz, and two parakeets, Charlie, and Paulie. She did have a pet rat named Raymond when she started writing The Magic Warble, but sad to say, he has since passed away of old age. Vicki enjoys writing, painting watercolors, watching movies, hanging out with her family, and chauffeuring her kids around to their many activities. Her favorite author is C.S. Lewis, and one of her fondest memories is when she was twelve. She would sit at the kitchen table and read The Chronicles of Narnia to her mother while she cooked dinner. These magical stories were very dear to Vicki and she remembers wishing, If only I could go to Narnia like Lucy and Susan. Vicki hopes that maybe, she can touch someone with her story in a similar way.