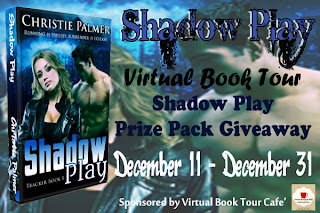 Hello All, and welcome to my stop on the Virtual Book tour of Shadow Play! I have a few things for you today. I have a review (yay!), an excerpt ( say what!?), and an author bio (for realz?!). 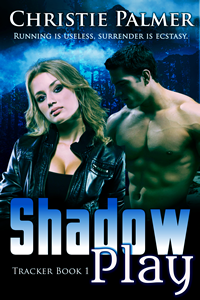 A small town in the mountains of Marshall, Montana is being plagued by an unknown entity and it is mutilating and killing the women of the town. At his wits end the Sheriff of Marshall has nowhere to turn but to a friend. A friend, with the abilities to track and kill any prey.

Ryder doesn’t normally do mortal issues. However, he can’t turn his back on a friend. Besides he is the best at what he does. After all he is a Tracker, an ancient race with unparalleled abilities to track down any prey. With one of the three essential elements: Taste, Touch or Smell. Heartless and cold, Ryder knows what needs to be done and performs his duty without feeling.

Kyra, an Air Element and the only female Elemental Enforcer, is sent on a fact finding mission to Marshall, by the Druid Council. She needs to find out exactly what is happening in Montana before the Tribunal goes in and kills everyone.
The last thing she expects to find is a Tracker, and is even more surprised to find out that he is on her side. But can they get past their initial feelings upon meeting and the sexual tension? Or will the evil that is living in the mountain kill them both.

Ryder and Kyra must learn to work together to destroy the shadow and save Kyra from a fate worse than death. When pure evil is involved is love enough?

Ryder followed the scent that was uniquely Kyra. Screams echoed through the dark, and after several minutes, her smell changed. Tinged with iron, she was bleeding. Anger perfuse him in a way he couldn’t understand. He ended up at several dead ends. Kyra was stumbling blindly through the caves. But he felt he was getting closer; her scent stronger.

He halted when he finally entered a large cavern. And froze, trying to take everything in. Then he saw her, her blue eyes sparkling in the dark of the cavern. He didn’t move as her eyes darted around, panicked.

Her head swung in his direction but he knew she couldn’t see as well in the dark as he could. “It smells like death,” she whispered. “It’s choking me.” She clawed at her throat, causing small scratches that started to bleed.

“Kyra, are you hurt?” he asked, stepping toward her slowly. He wasn’t sure what had prompted her to take off like she had, or why she was now curled up in a ball.

She shook her head no, and he could see tears streaking down her cheeks. “Did you know that air holds memories?” she said frantically. “Holds pictures, visions, life, and death, stories of what has come and gone. Lives it has touched.”

Ryder hadn’t known that. He couldn’t imagine hearing and seeing what could be trapped in the air. As a Tracker, he knew the air held many things, things he explored as a Tracker. But as an Air Element, the air did something completely different to Kyra. And at the moment, it looked like it was killing her.

“The air,” she looked around the dark cavern, “is trapped with the souls and lives of what happened here.” Her body stiffened and then convulsed. Ryder rushed over to her. Once the convulsion stopped, she looked at him. Her bright blue eyes glowed in the dark, beautiful as ever. “Terrible things have happened here,” she whispered in pain.

Kyra clutched at the front of his shirt. “There isn’t any air down here, Ryder. I’m an Air Element and this air is dead” She shook her head, struggling to take a full breath. “I can’t breathe down here.” Tears ran down her face and he brushed them away.

“Then let’s get out of here.” He offered her his hand.

Kyra closed her eyes and leaned her head back. “There isn’t any air down here and something horrible is going on. Look around! The souls are trapped. The screams held in the air are desperate to be heard. But they aren’t because there isn’t any air!” she bellowed.

Ryder stood and looked around. Several tables sat littered with things you would find in a laboratory—microscopes and incubators. A generator rested in one corner. “What is this?” Metal fridges hung open, the contents spilled all over the floor.

Kyra grabbed his pant leg. “Someone is doing something very, very wrong. Creating things, living and dead.” She looked around frantically as if someone would stop her next words. “Mostly dead, and they hurt,” she cried. “They hurt so badly.”

More screams pierced the darkness, and Ryder thanked the Gods they weren’t from Kyra. He sent up a prayer for the poor soul. Kyra wrapped her arms around her head, as if that would stop the sound. Kyra was right—something horrible was taking place in this mountain. And they needed to find out exactly what it was. But at that moment, his main concern was Kyra.

“Make it stop,” she moaned. “Something very, very bad is happening down here,” she said again.

I want to start by saying that I would have chosen a spicier excerpt for you guys.. but I was given one of two choices. So no spicy for you. :)

I have to say, I was really pleased with this book! I absolutely loved their paranormal  abilities. A tracker and a wind elemental? too cool!

Ryder is totally a human lie detector! His abilities actually scared me! Imagine having that kind of power over someone and making them tell anything by messing with their mind and making it all fuzzy. O.o eep! But I love his powers anyway. I love how at first his character is hard and he slowly softens. also, loved the progression of his character from heartless immortal tracker to someone with concerns for others. He is no sweetheart, but he'll do. :) The man has an incredible jealousy streak. I mean, seriously. But I could not wish for a better hero for this story and he was awesome.

Kyra was my favorite character. I loved the dialogue between her and Ryder. And I love how, after he did his mind- freak thing on her, she is angry with him- but he still wants to "get to know" ;) her. It was funny because he was totally oblivious. Also, It never occurred to me how an air elemental would be affected if they were in an area with thinner air or less air. That was awesome storytelling on the author's part.

Oh man, the evil guy totally freaked me out! I loved it! Well, this book was awesome and I would definitely recommend this book. And I will check out more by this author as well. :)

About the Author, Christie!

Christie was born and raised in a suburb of Salt Lake City, Ut. She lives less than a mile from the home she grew up in. World traveler she is not. But what she lacked in travel she more than made up for in her imagination. Within her vivid imagination she has traveled the world over as well as different worlds and different times.

She works a full time day job to pay the bills but looses herself in books and her writing whenever possible.

She is a loving mother of two wonderful children that she admits she is obsessed with. She has been married for 18 years to a very tolerant man that is grounded in reality in order for her to fly to the heights of her own imagination.

She started writing when she was a teenager after reading a book that she didn't like the ending too. Took a hiatus to raise her wonderful children but has dedicated herself to becoming a published writer for the last several years.