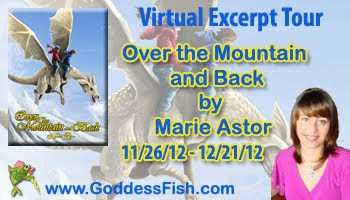 Over the Mountain and Back
by Marie Aster

With his father gone missing and his mother losing her grip on reality, Peter Bailey’s life is no picnic. Peter’s gray existence changes unexpectedly after he takes his new snowboard for a ride in the mountains of Colorado and is stunned to find himself in Transadonia – a hidden world that coexists alongside with the Earth.

Lara Grover never listened to her elders, so warnings like “do not talk to strangers” mean nothing to her. When a boy from an unknown world saves her from an avalanche with the aid of a snow dragon, Lara is not stunned in the least. Instead, she joins Peter on his quest to help him realize the purpose behind his arrival to Transadonia.

Together, Lara and Peter embark on an adventure filled with perils, trickery, betrayals, and unexpected alliances.


The beavers were organized in groups of about five or six beavers, and each team was responsible for a specific task. Some were sawing down trees, others were chopping up the cut down tree trunks into chunks of wood, and others were repairing the bridge. The most dangerous task belonged to the beavers who were sawing down trees. Some of the trees were more than ten times the beavers’ height, and if such a tree were to fall down the wrong way, it would be massive enough to squash several beavers at once. The beavers seemed to be unfazed by this, as they fearlessly maneuvered gigantic saws in their steady, nimble paws. The saws were electric and made ear-splitting noises, as they bit into the flesh of the trees. However, the beavers remained oblivious to the noise, pressing on with such speed and dexterity that at times they disappeared entirely in a fog of saw dust. The beavers were so absorbed by their work that they completely ignored both Lara’s and Peter’s presence, and the children’s attempts to attract the beavers’ attention failed miserably as the beavers rushed on, heedless to everything else but their work.
“See that beaver on the other side of the bank?” asked Peter, pointing to a distinguished-looking beaver with long, white whiskers and dark-rimmed glasses who was busy instructing a crew of beavers. “It looks like he is in charge. Let’s go and try to talk to him.”
“All right, let’s give it a try,” agreed Lara.
While they were crossing the bridge, Peter noticed one of the younger beavers among the tree cutting crew who stood out from the rest. He was so much shorter than the others that the saw was almost half his height, yet he handled it bravely, sawing away at a tree about Peter's height. Then something unexpected happened. The beaver's saw got jammed, and he paused to examine it, unaware that the tree he had been trying to cut down began to tilt ominously in his direction and was about to land on top of him.
“Watch out!” yelled Peter. The tree trunk was about to collapse when Peter closed down the remaining distance with one giant leap and pushed the beaver from under the tree. The beaver lay dumbfounded on the ground, his confusion further intensified by the thumping noise of the crashing tree that landed a few steps away from him. The beaver was too shocked to speak, and it took him several minutes to realize what had happened. When he finally did, he thanked Peter profusely. By that time the other beavers had gathered around them.
“Are you all right?” cried Lara. She was worried that Peter might have gotten hurt.
“Yes, I’m fine,” said Peter, but in truth he was quite shaken, having realized that he had escaped the falling tree by mere inches.
“Thank you very much for helping young Billy here!” exclaimed the older beaver that the children had noticed earlier. The older beaver’s vest said “Foreman” on the back.
“No problem. I’m glad I could make it in time,” replied Peter.
“How many times do I have to remind you of safety procedures?” the older beaver berated Billy. “Never stand in front of a tree that you are sawing, always stand behind it!” continued the older beaver, rubbing his nose in an agitated manner. The beaver foreman huffed and puffed when he spoke, gesturing wildly with his top paws, which looked rather small in comparison to his hefty body. While his words were rightly said, Lara and Peter found the whole spectacle quite funny and were barely containing themselves from bursting into laughter by forcing serious expressions on their faces.
“We are on a tight schedule here and can’t afford to have any accidents! Suppose this nice fella hadn’t made it in time? What would I tell your family then? Sorry, your son got squashed by a tree? And whom do you think they would blame for it? Me! I am personally responsible for you!” the beaver foreman continued his tirade.
If beavers could blush, the young beaver’s muzzle would have been bright red, and it probably was under his brown fur. He stood with his head lowered and did not dare raise his eyes for fear of encountering the foreman’s stern look. Finally, the old beaver realized that he had chastised poor Billy sufficiently and directed his attention back to Peter and Lara, who were much relieved by this since with every moment it became more difficult for them to stifle their giggles that were threatening to burst out, provoked by the old beaver’s justified but comical rants.
“Please forgive my manners; I don’t normally act like that. I forgot to introduce myself. My name is Stuart.”
“Very nice to meet you, Master Stuart,” said Lara. She was familiar with beaver customs and knew that older beavers preferred to be addressed in a formal manner. “My name is Lara, and this is Peter. We are looking for my cousin, and we were wondering if you might have seen him. We believe that he was kidnapped by the forest witch, Ramona, and her friend, Leshii.”

A WORD FROM THE AUTHOR + BIO 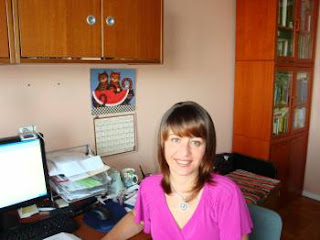 Thank you very much for joining me for Over the Mountain and Back blog tour. The story of Over the Mountain and Back began over twenty years ago when I was fourteen years old and decided to write a novel as an anniversary gift for my parents. It was going to be a fantasy adventure about a boy named Peter and a girl named Lara set in a magical country, Transadonia. I remember writing studiously on the pages of an ornate notebook I had acquired especially for the occasion. Back then computers were not yet widely used, so I had to pay extra care to my handwriting. A year later, Over the Mountain and Back was completed, or at least I had thought so at the time. Needless to say my parents were very surprised with their anniversary gift.

Years passed; I finished high school and went on to college. Lara’s and Peter’s story faded from my mind, replaced by the hustles and bustles of everyday life. Then, one day – the day that happened to be my thirtieth birthday, my parents presented me with a gift: it was oblong in shape and wrapped in shiny paper. After I opened the wrapping, I was stunned to find the long forgotten story I had written all those years ago.

Long story short, after two years of extensive work, I rewrote and expanded Over the Mountain and Back into a novel of 95,000 words. For me it had been an exciting journey to be reunited with my old friends: Lara and Peter, Forest Witch Ramona, Chancellor Libra, Bookbrownies, and, of course, Carnelion, among the many others.

I hope that you will join Lara and Peter on their adventure in Transadonia.

If you would like to find out more about my books, please stop by website:    www.marieastor.com.
Regards,
Marie Astor

For Young Adults:
Over the Mountain and Back – a fantasy adventure novel

On the Rim of Love – a contemporary romance about the unexpected power of love.

A Dress in a Window – a collection of short stories about love, coincidences, and fate.

Marie will be awarding a $25.00 Amazon gift card to a randomly drawn commenter during the tour.

follow the tour and comment; the more you comment, the better your chances of winning.  Tell Marie how awesome her book sounds, congratulate her on completing her book. COMMENT SOMETHING.So visit all the stops on the tour! The tour dates/ blogs can be found here:

Remember, Blog tours are to help authors get the word out about their books, so SPREAD THE WORD! :D Thanks for stopping by. By the Way, isn't the dragon on the cover cute?