{Review} The Boy from the Woods by Jen Minkman 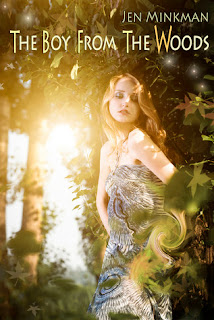 Julia fell down on her knees next to his lifeless body, her heart filling with dread as she noticed the left side of his face was covered in blood. He had fallen off the motorbike, hitting his temple on a sharp-edged rock. His head injury looked really, really bad.
“Michael?” she whispered softly, putting a trembling hand on his forehead. “Can you hear me?”

Julia has been in love with Michael for years. He’s the hottest guy in school, and she can’t believe her luck when they finally hit it off during Senior Prom. Her dream doesn’t last, though: after a few dates, he callously dumps her out of the blue. Summer vacation starts with Julia feeling heart-broken and miserable.
But then she rescues Michael in the woods when he has a motorcycle accident in a heavy thunderstorm. From that point onward, her life is turned upside down. Michael has changed completely after the blow to the head that nearly killed him... and he wants her back. But why is he so different? And will she be able to trust him this time around?

Can the boy who broke your heart ever win it back again..?


I received this from the author for my honest review.

The book starts off with Julia at her senior prom and how she wants to get Michael to notice her. Well he does. She is on cloud nine and then he takes her back to his place and they have a wonderful night together and then BAM He wants nothing to do with her after prom. Doesn’t that just make you sick to your stomach? Guys that know that the girl likes him and then they use them to get what they want. I’m going to get off that subject before it gets out of hand. LOL But that incident does play a big role in the book though because Julia saves Michaels life when she finds him in the woods. After that accident he changes and Julia can’t wrap her head around it and yet she wants to believe that he is changed. He is changed but I was still a little bit weary of him. I never really forgave throughout the whole book. I was just wanting for everything to hit the fan. So Michael becomes the boy from the woods, but is there another boy from the woods…lurking. *Shudders* you’ll have to read the book to find out. This part of the book had me cringing. It had me freaked out and I didn’t know what to do with myself. But the book is about Julia and how she falls in love..with a little twist.

Overall: This was a really sweet but sad story.

Julia: For her I’m going to paste what I wrote on goodreads and of course add some more to it. :D

"Holy heck Julia! You are too good for Michael! Get over him already."

"Julia makes me tired. UGH why do you do this to yourself? He is a jerk and always will be a jerk. Once he gets his memories back, he will go back to his original ways. UGH UGH UGH"

Now with saying all that, I really liked Julia. She just could be really naïve sometimes. By the end I could tell she had grown. She wasn’t afraid to say what she wanted and although she still likes fairy tales she doesn’t live by them anymore.

Gaby was a hoot. She was the comic relief in the book. I was always waiting to see what she would say next. She was not afraid to speak her thoughts. She was also a good friend. You can’t find one better than her. Well my bestest friend is pretty great. :D

Michael: I’m not going to say anything about him because I think it would be kind of a spoiler alert. So yeah Michael lol :D

Thorsten: Ok I really liked this guy. Ok maybe it’s his blue eyes and the fact that he plays the guitar. ;) Once he cam into the picture I was like Michael who? Lol


"He took your V-card and didn’t even bother to call you back afterwards, and for that fact alone he should be on your shit list forever. Michael doesn’t deserve you, and you don’t deserve to get your heart crushed by him all over again.”