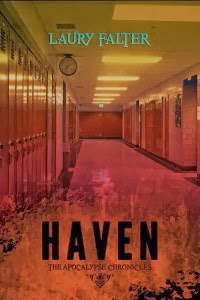 On an ordinary day in early September, Kennedy Shaw leaves for school unaware that within a few minutes the world she knows will be gone - succumbed to an outbreak of epidemic proportions. After finding a safe haven inside the security of her enclosed high school, she learns that four others have survived, one being a bold, mysterious transfer student from Texas whose unruffled demeanor harbors more than a cool interest in her. As they struggle to survive the dead fighting their way inside, will Kennedy discover there is more to life than survival? And will she and the others find a way to live in this terrifying new world?

Read the inspiration behind the novel HERE 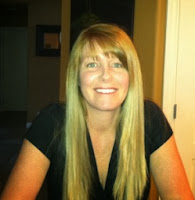 
Laury Falter is a bestselling author of young adult romantic suspense and urban fantasy. She has three series out: the Guardian Trilogy, the Residue Series, and the Apocalypse Chronicles.

This book wasted no time getting right into the action. The book is told from Kennedy's POV. Kennedy is a troubled (albeit badass) senior in high school trying to deal with the death of her father a year earlier. At least until the Infected attacked. Then Kennedy is suddenly the co- leader of a very small group of survivors inside her high school. The other guy in charge- Harriosn- and Kennedy have some serious chemistry going on before the shit hits the fan. And low and behold- and I love this- the first day they speak to one another is the last normal day of their lives. But there is no time for romance with The infected running around "nom-nom-nomming" on people... is there?

Kennedy is strong character who is easy to love. I was rooting for her from the very beginning. I will admit that some parts of her story got me a little emotional, since, it made me think about my own father. *sniff* MOVING ON. No matter what is thrown at her, she always comes out swinging.. or.. you know.. kicking. Because she is bloody awesome. When she is presented with a new or difficult situation, she attempts to think it through and she can admit when she makes a mistake. She is also very loyal. All characteristics I admire in a hero or heroine.

Harrison is pretty cool himself. He is a gentleman and is genuinely concerned about Kennedy and the other survivors in the school. He plays an integral part in the book alongside Kennedy, and I am genuinely looking forward to learning more about him in the upcoming book. hmn...

The other survivors in the school were pretty basic.

On to the actual storyline itself. I am thrilled that the "virus" or whatever actually has an origin and did not just show up all willy nilly out of the blue (although I don't mind that, personally.) but it is a large part of the story that I found intriguing. Intriguing indeed...
Also, I love that the book takes place over several months. I don't know why.. I just do.
The zombie plotline and characters created by this author are pretty original.

The Infected? As villains go, they were not so bad, but they weren't very memorable either. *shrug* Hey, I love zombie fiction. If you have a weak stomach, I think you will be able to handle this book. It mostly centers on the characters and their survival. Not much gore to behold.

Oh, hey, one more thing. You can't just end the book like that, woman! It is driving me insane. O.O

All in all? Kennedy kicks ass, Harrison is adorable and intriguing, the timeline is A-ok, the Infected have a believable origin, and the plotline thoroughly captured my interest. On to book two. You know. When it comes out. Next year.

GIVEAWAY:
One DIGITAL copy of the book. Laury will send the winner a digital copy from either Amazon.com or Barnes and Noble. To enter, leave a comment with a way to get in contact with you. Any old comment will do. I will pick a winner on December 17th.