{Review} No Love for the Wicked (Damned, #2) by Megan Powell 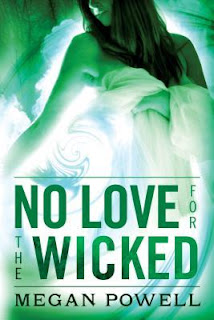 It’s taken six months, but supernaturally gifted Magnolia Kelch finally seems to have her surging powers under control. Then she arrives home to find a group of strangers in her beloved farmhouse, and that control is immediately put to the test. Magnolia quickly learns that her “guests” are actually part of the Network—not from the task force headed by her mentor, Thirteen, but a second group, led by British agent Colin St. Pierre.

Unfortunately, Theo, a Network agent who shares an intimate connection with Magnolia, doesn’t trust Colin as a new commander. When team missions collide, Magnolia finds herself in the middle of Network infighting, asking herself who among those closest to her truly has her best interests at heart.

But an even greater threat lies on the horizon. Intent on tracking down the source of Magnolia’s powers, a familiar enemy resurfaces with a plan—one that is far more sinister than the Network has ever seen.


No Love for the Wicked wasn't as good as the first one, but I still loved it. Magnolia will always have a place in my heart. I don’t think I’ve read about a character that has gone through as much as she has. In this installment, she decides to finally go home. No not to her horrid father, but to Thirteen and his team because she can finally control her powers. Magnolia's reunion with them is a big one- especially with Theo. They share a connection that even she can’t explain- and it’s getting stronger every day. With that in the front of her mind, she has to help the team stop her father from gaining anymore power. In order to do that…..she has to go back to the place that haunts her dreams.

Will Magnolia be strong enough to overcome her fears or will she freeze at the sight of her father?

Like I said before, it wasn’t as good as the first one, but I loved it all the same. The reason I think it didn't surpass the first one is because we still don’t get to see the full extent of Magnolias powers. I kept expecting something big to happen and it never did. I think it’s all been leading up to the next book and that’s when everything will hit the fan. Oh, I can’t wait. I’m practically bouncing in my seat. What we do learn in this one is more about Theo. Finally we get some insight on him and his life. Also- Magnolias dreams? I mean.. what in the world? MEEP!!!! OMG Who would have thought. It was a big shock to me. I wish there had been a bit more missions. The ones in the book were pretty big.. but I want to see Magnolia in real action. Not just little scenes. I will be patiently awaiting the release of the next in the series.

Magnolia: Words can’t even describe the kind of pain she has endured- and yet she doesn’t let that keep her down. She is by far the strongest character I’ve come across. If anyone tried to take on Magnolia- they would lose. I know that’s a strong statement, but I honestly believe that. She doesn’t trust……well she is trying to learn to trust people. She is Always on alert, so don’t even think about sneaking up her. Unless she is with Theo. Then she just forgets everything besides him. :D

Theo: Yes, we get to learn more about him in this book, but I still don’t feel like I know him. He is an alright character and I can tell he feels for Magnolia. But I’m just going to hold off on my opinion of him. Thirteen doesn’t think Mags and Theo should be together and he is a pretty good judge of character. Thirteen doesn’t hate him No he loves Theo. He just thinks they shouldn’t be together. So that makes me suspicious of Theo. I want to like him but I just….can’t. Well I like him enough..hopefully you know what I'm getting at.

Shane: I felt like putting him in this review because I feel for the guy. He fights his attraction for Magnolia everyday and he hates it. And he hates her. He doesn’t want to have these feeling for her but I think deep deep DEEP down he wants to. He is just confused and is it weird that I like him more than Theo? I don’t know how it happened, I guess I like my guys of the brooding type. LOL

Born and raised in the Midwest, I have a strange affinity for State Fairs and basketball humor. When not writing I am often found reading, usually feeding my paranormal romance addiction. I love cheap coffee with tons of sugar and can eat no-bake cookies by the dozen. Exercising isn’t bad, but I’m pretty sure dieting is the work of the devil.