FIND HER ON GOODREADS 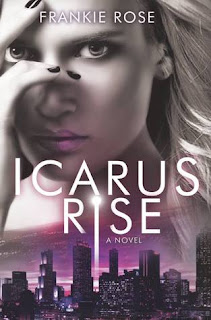 Iris Breslin is on a mission with only one goal: escape Breakwater, Wyoming, where her family’s horrific history is common knowledge. New York couldn’t be more different to her small town upbringing, but better still, absolutely no one at Syracuse University knows of the brutal murders her father committed before taking his own life when she was fourteen years old. For the first time, Iris has friends, a career plan, a regular life.

Jake Stafford grew up in Breakwater. Discovering Charlie Breslin’s body on his first day as a cop may have snared Jake in the Breslin family nightmare, but the truth is that he was already involved long before. Now a part of the NYPD, Jake remains entangled in the five year old mystery—a mystery he intends to solve. That isn’t going to be an easy task, especially with Iris back in his life. Jake must fight to convince the girl he loves that his feelings are genuine, and not some sick obsession with a man who once helped him when no one else would. His hidden secrets are darker than Iris can possibly imagine, but can she drop her guard long enough to uncover them?

Everyone has a soul

Some are just worth more than others

Farley Hope was seventeen when her mother disappeared. In the last six months not much has changed, except that her eighteenth birthday came and went and still no sign of Moira. Her life is just as complicated as it always was. Since her father died in a car crash before she was even born, she’s officially parentless, and to top it all off she’s still suffering from the hallucinations. Mind-splitting, vivid hallucinations- the kind prone to induce night terrors and leave you whimpering under your covers like a baby.

The last thing on her mind is boys. Farley is on break from St. Judes’ when she meets Daniel. It’s not some casual run in at a party, or even a blind date with friends, though. Daniel is the guy following her in his 1970′s Dodge Charger; the guy standing at her window in the LA lunch hour traffic, trying to persuade her to leave everything behind and follow him. And he's hot as all hell.

The moment Farley lays eyes on Daniel, everything changes. He is cold and withdrawn, but there are cracks in his harsh veneer- cracks that betray the secrets he is trying so hard to hide. Farley is drawn into a world that will shake apart everything she thought she ever knew. There are truths out there that she must learn: that a person’s soul is their only real currency, and there are people who would do anything to take hers; that loving someone can hurt so much more than hating them; but, most importantly, when your future is predestined, there is little you can do to change it.

Her coming has been awaited for hundreds of years.

She is destined to end the tyranny of the Soul Reavers.

To do so she must die.

When your friends go missing and you don’t know if they’re dead or alive; when you tie your soul to the one you love; when you kill to protect and your family suffers, there’s only one thing you can do:

Farley Hope is special. She was prophesied to kill the forebears of her bloodline- a race of cold-blooded Reavers, men who steal the souls of the living to gain power. The Quorum had counted on Farley ending her own life in the process, but when Kayden came to her aid and helped save both her and Daniel, he undid their plans. Now the Quorum are displeased, not only with Kayden, but with Farley and Daniel too. Though her father is now dead, Farley’s troubles with the Reavers are far from over. An ancient Immortal, trapped for a thousand years, wants Farley for himself, and he will stop at nothing to claim her.

With secrets that lead to anger and pain, that turn friendship to dust, the group must overcome the problems within their own circle before they have a hope of fighting off the powers that threaten their lives.

She has no name.

She has her knives; her training; her halo.

When a newly-named Kit escapes the Sanctuary after killing her best friend, the last thing she needs is another knife in her hand. Or Ryka, the damaged, beautiful blonde boy, who she refuses to let save her. Still learning how to process the onslaught of her new feelings, the sights and sounds of Freetown are overwhelming and strange. There are a hundred differences between her old home and her new one, but one thing remains starkly similar: the matches. Yet where the blood in the Sanctuary landed only on the colosseum floor, Kit will quickly learn that a river of red runs through Freetown’s very streets.

Freed from the oppression of a society who stole her right to feel, the true horror of her old life leaves Kit wondering if she really has been freed at all. Would she be better off without the crippling horror of all the blood on her hands, or is the love of one boy worth living through all the pain?

Raksha is the call of the dead. It is the rumbling chant for fresh blood from the other side, the demand for sacrifice. The colosseum is behind Kit. The fighting pits await.