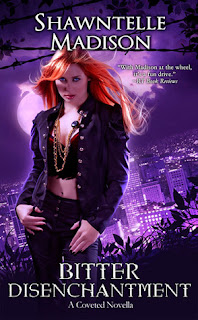 Werewolf Natalya Stravinsky's outspoken sidekick, Aggie McClure, is featured in this prequel novella. Before Agatha set foot in South Toms River, New Jersey, she had the fight of her life to face. Destined to be the alpha female over her Manhattan pack, Aggie was fully prepared to take on her role until her father arranges a marriage without her consent. She wants out–but the only way is with money–something her new controlling husband won't give her to escape. But such odds never kept a wolf like Aggie down. To sever the twisted tie, she finds herself pitted against raging wood nymphs and backstabbing brownies in an underground supernatural fighting ring. With every victory, the sweet taste of freedom is closer, but her husband isn't willing to let her go that easily. Until the very end, Aggie must fight for the one thing she's never had: a choice.

I received this book from CrushStar Multimedia LLC for my honest review.

Agatha AKA Aggie is the daughter to the alpha of the Manhattan pack. Life for her might seem like it’s been easy, but it hasn’t. She had to live with her father abusing her mom. When he found out about her eating habits, he took precautions with her as well. He put locks on all the pantries and would have people watch her. If that wasn’t enough he finds her someone to mate with and announces her engagement. She is reluctant at first, but Victor wears her down. She thought she knew him, but she didn’t know him at all. Now she will do anything to get him and her father out of her life and she has found just the place.

Aggie is in the fight for her life.

I’ve always wondered how Aggie ended up in South Toms River, New Jersey and now that I know, it was nothing like I expected. She had to fight to get her freedom, her freedom from her father and her husband. I always knew that Aggie was a tough cookie, but I didn’t know how tough until this book. A lot of sacrifices were made is this book and I cried at each one. Aggie was just great. She could give as well as take a beating. I also loved how Aggie and Nat met. We just get a little glimpse in Coveted. If Aggie didn’t meet Nat I don’t know where she would have gone. She wants everyone from her past to disappear.

Overall: A highly enjoyable book that has lots of action and difficult decisions

Aggie: I don’t blame her one bit for the things she did in this book. I would have done the same thing. No one wants to be locked in their room like a prison. Especially by someone that you thought you knew. She has real courage to do the things she did and she cares for others deeply, which she shows in the book. I came to care about Aggie and this made me love the book all the more.

Victor: Oh the charmer. He tries his best to get Aggie to like him and he finally wears her down. I know others will think he is a pretty stand up guy, but this guy has skeletons in his closet. He is not who he seems and has everyone fooled. So yeah, I highly dislike him.